Skip to main content
News
A version of this story appeared in the Oct 23-Nov 5, 2015 print issue under the headline: The joys of Mychal Judge. 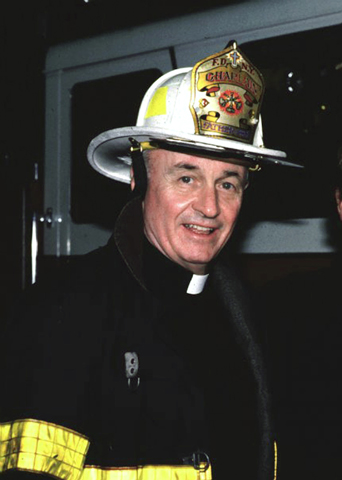 Franciscan Fr. Mychal Judge, a chaplain with the New York Fire Department, is pictured in an undated photo wearing his helmet and bunker coat. Judge died while giving last rites to a firefighter in the aftermath of the terrorist attacks that brought down the twin towers of the World Trade Center. (CNS/courtesy Holy Name Province Franciscans)

His lips are moving. His gaze is upward. The man's face is grim under the shiny white helmet designating him a firefighters' chaplain. His Roman collar tells the viewer this is a priest. The lobby where he stands is noisy. Broken glass is all about. The sound and shadows of cascading bodies can be glimpsed just outside the lobby windows.

Franciscan Friar Mychal Judge is saying the words of final absolution as the bodies continue to fall. It is not a scene from Hollywood, not even out of Dante's Inferno or Hieronymus Bosch's canvas of hell. It is Lower Manhattan just after 10 a.m. on a bright Tuesday, Sept. 11, 2001. The south tower of the World Trade Center has just collapsed, causing debris and dust to dot every domain.

Inside the north tower, where Judge moves among a pack of firefighters, he removes his helmet to administer last rites to one of his New York City Fire Department brothers. Only seconds later, Judge himself is felled by a falling object. The lights go out. A New York police officer with a flashlight soon discovers that "Father Mike" has been struck.

Within minutes, the dusty corpse of the 68-year-old Irish-American is carried out of the soon-to-collapse second tower by five men supporting his limp arms and legs.

The featured picture was captured on film by Gédéon and Jules Naudet. The French brothers had been in New York for three months, filming a portrait of a probationary firefighter in the FDNY when terrorists flew two planes into the twin towers.

Prompted by thoughts of safety and sanctuary, Judge's rescuers carry his body into St. Peter Church just blocks away.

Fr. Donald Fussner, who opened the door of St. Peter on that day of death and invited the rescuers to lay Judge's body before the altar, recalled the moment on Sept. 25, 2015, when he watched Pope Francis' motorcade leave after the interfaith service at the National September 11 Memorial & Museum. Just knowing the pope had prayed at the monument where Judge's name is carved as well as those of all the other 9/11 victims is a reminder of the sacredness of the spot, said Fussner, a retired New York priest.

Six months after terrorists flew two planes into the twin towers, millions watched the Naudet documentary "9/11" on CBS. It was the first time that most had a glimpse of the chaplain in life and in death. Already there was talk of Judge's sainthood in New York and New Jersey, where the Franciscan had grown up and lived out 40 years of priesthood.

Of the almost 3,000 who perished that morning, he was declared casualty No. 1 on his death certificate. His simple resting place among almost 300 friars buried in Holy Sepulcher Cemetery in Totowa, N.J. -- about 15 miles from Ground Zero -- draws hundreds of visitors each year. Many leave mementos and notes advocating sainthood for Judge.