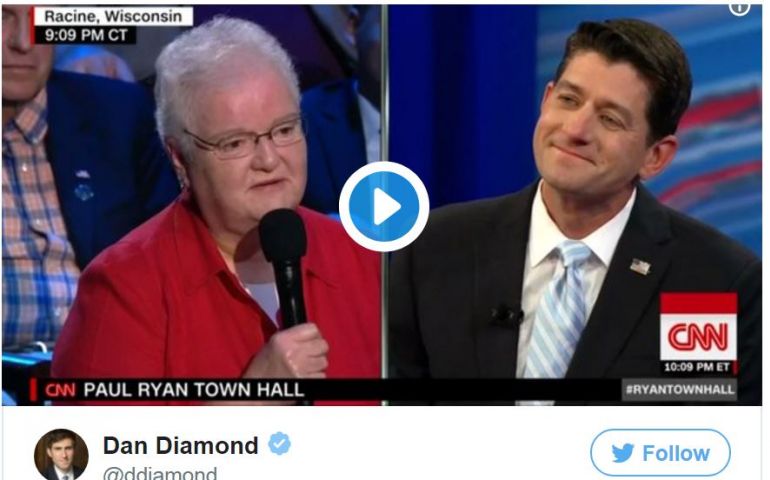 Screenshot of a tweet from Politico reporter Dan Diamond about Sr. Erica Jordan's question to Speaker of the House Paul Ryan.

If you've been on the internet this week, you might have read about Speaker of the House Paul Ryan's "showdown" with a Catholic sister at a CNN town hall that took place Aug. 21. Sr. Erica Jordan, the Sinsinawa Dominican sister in question, asked Ryan how he squared his legislative policies with Catholic social teaching. Reactions to Ryan's response were mixed.

Global Sisters Report caught up with Jordan to get her reaction and to find out why she asked Ryan what she did.

GSR: You're a retired principal, but I know sisters never really retire. What are you doing now?

Jordan: [Laughs] That's right. I retired from being an elementary school principal for 30 years. I was a teacher before that, but that was my ministry the last 30 years, and it was in three different schools in the Chicago area that have a mainly Latino population.

So now that I'm retired, I live in Kenosha, Wisconsin, which is a small city of about 100,000 people. The two sisters I live with and I have decided to do a deep dive into local politics and different initiatives, so we joined a group called the Congregations United to Serve Humanity, an interfaith group. And we're part of the immigration task force for that. We're also starting an anti-racism initiative. And that's just a fledgling group — it's just five of us so far.

I also visit detained immigrants at the Kenosha County Detention Center every Thursday. One Saturday a month, I go to the detention center in Juno, Wisconsin, with the same program. It's a pastoral outreach program of a group called Interfaith Committee for Detained Immigrants out of Chicago. I look at it as just outreach of another human being to somebody who doesn't get to have much contact with people outside — just to let them know that they're cared about and that we're very interested in what's happening with immigration issues. Also, we're able to contact their families for them if they can't do that. It's just kind of a human-to-human thing, I guess I would say.

So those are my current involvements.

I am. [Laughs] It's much different than being in school, that's for sure. But it's all good.