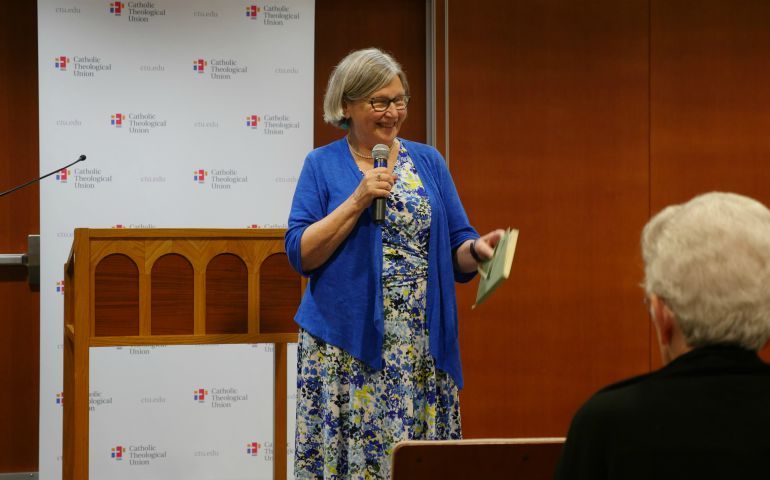 Chicago — In these "challenging times," it is not enough to fight against injustice, said Social Service Sr. Simone Campbell, executive director of Network, a Catholic social justice lobby, and organizer of the Nuns on the Bus campaign.

"If you push back against something, you reinforce the very thing you're pushing against," she said at a presentation June 13 at the Catholic Theological Union in Chicago. "You get stuck because you're both pushing."

Instead, Campbell said, "the Gospel is about fighting for a vision," the one Jesus articulated about the kingdom of heaven.

"That vision, I believe, our nation needs to know about and we need to fight for," she said.

Campbell told stories, described policy and legislation, and gave advice and encouragement to members of the crowd gathered at Catholic Theological Union, many of whom shared concerns about what she called "the rise of hate and a permission for racist tendencies to get expressed."

"We as a nation are better than this," she said after telling stories of people she has met who struggle to feed their families, are homeless, have no health care or are mired in student debt.

But to effectively influence the political process will require spiritual sustenance, said Campbell, who has 14 years of experience as a lobbyist in Washington, D.C.

"I believe our only way out of this mess is by rooting ourselves in a deeper faith ... into the depth of divine love that can help us break through in very hateful times," she said. "Absent a deep prayer practice, we're doomed."

Hillary Clinton, the media and the common good

Poverty and drought: When a sister goes among the people in India, lives change