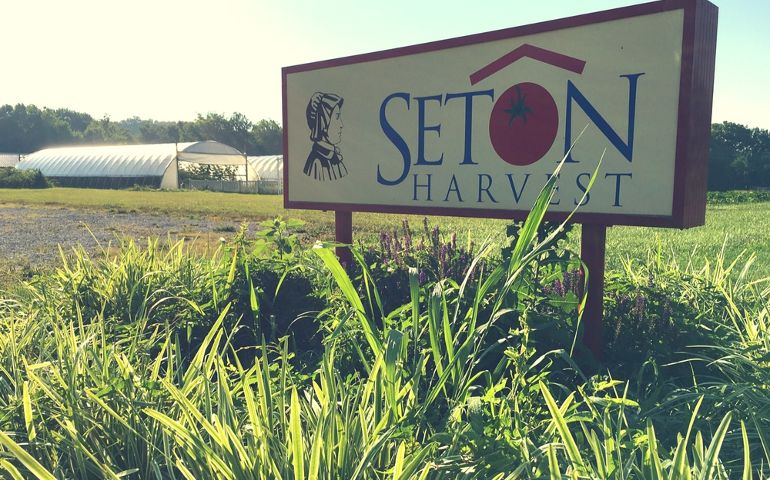 Editor's Note: Global Sisters Report often focuses on work that sisters do to help those who are hungry or have food insecurity. This week, as the United States celebrates the feast of Thanksgiving, we focus on sisters who are active in food justice — trying to make sure that everyone not only has enough to eat but also access to healthy choices. Read part one: Equal access to nutrition determined by economic policy​.

At about 7:30 in the morning, Daughter of Charity Sr. Maureen Houlihan drives over to Seton Harvest farm, pulls on a pair thick, rubber boots and carries feed over to her chickens. Technically, they aren't her chickens — they belong to the community owned and operated Seton Harvest — but it's a well-established fact that Houlihan and the chickens have a special bond.

When the chickens see Houlihan coming, they begin cackling and crowding around the gate of their coop in anticipation. But when she actually sprinkles the feed, there's instant silence.

"That shuts them up," Houlihan says with a giggle. "At least for a little bit."

The Daughters of Charity in Evansville, Indiana opened the nine and a half-acre Seton Harvest farm 10 years ago in an effort to provide fresh, pesticide-free food for the local community. People are invited to become shareholders in the farm, which allows them to come every week to pick up some of the 70 varieties of fruits and vegetables grown there throughout the year. Every year, the farm also donates about 12,000 pounds of produce to area food pantries and homeless shelters.

In the last decade, a number of communities of women religious have taken up the mantle of food justice — that is, a local community's right to grow, sell and eat healthy food. Some, like the Daughters of Charity, have started natural farms or community gardens. Others have immersed themselves in agriculture policy on the local, state and federal levels.

Whatever the sisters are doing, it's all in response to a changing food system they believe has stripped food sovereignty from the people. Rather, it's now a handful of multinational food corporations that decide what foods are available in grocery stores.

Lens on Creation: Planting trees to heal the Earth

The fine-tuned universe -- part one