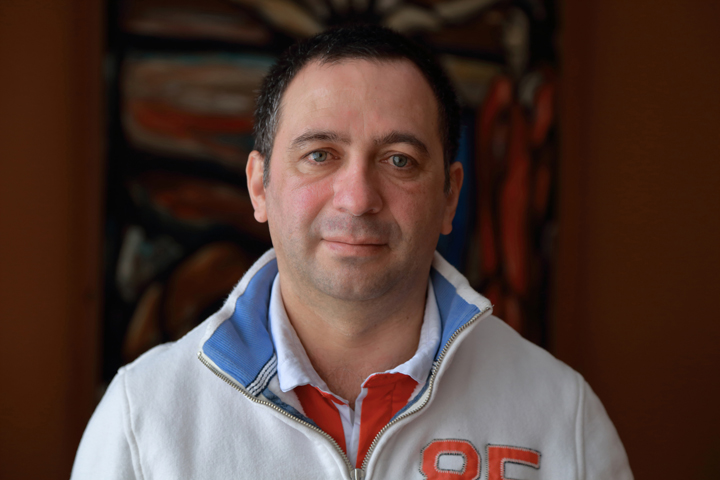 A well-known personality in Colombia, he fled to Canada to stay alive. Uprooted, new to the French language, he lived in precariousness in Quebec City, drawing strength to live from his family and his faith. Now he is in charge of the Latino community of the Archdiocese of Quebec.

Here is the exceptional story of a refugee.

Deacon Arismendy Lozada glanced at his cellphone. News alerts flashed on his screen, alternating among soccer, religion and politics. From his office in Saint-Mathieu's rectory in the Sainte-Foy borough of Quebec City, he still follows the feats of Bogota's Santafecito soccer club. However, the ever-present news about Canada's plan to welcome 25,000 Syrian refugees made him pensive.

"We come with a luggage full of dreams. When the plane touches down, everything is wonderful," he said, thinking about refugees now arriving on Canadian soil. He knows what he is talking about: In order to stay alive, he fled Colombia in 2003 and ended up in Canada.

If he could speak with every single Syrian refugee, he would say: "Stay hopeful, stay faithful."

Born in the 1960s in the Colombian department of Caqueta, he grew up to become a respected journalist, writing and doing some radio and television. Known for his social sensitivity, he was elected journalist-of-the-year by his association in 1989.

But his life took an unexpected turn when, hospitalized, a blood transfusion left him with hepatitis C. Cirrhosis almost killed him.

"When we face death, we start to question ourselves," he said.

"I was Catholic, like everybody. I went to church sometimes. Back then, I had a radio station in the small town where I was born. The priest came to me one day and asked if I could do a live one-hour transmission of the Mass. I thought to myself that it would make me lose money, but I said 'yes' so he would leave me be," he recalled. "But after my illness, I started my quest: Who am I? Where I am? Why I am here? And one day, I wondered what God wanted with me. ..."

These questions led him on a process where he went from being a "mundane" Catholic to an "engaged" Catholic -- to the point where he would enter the seminary and, ironically, see the same priest he thought so bothersome become his spiritual director. After a year and meeting the woman he would marry in 2000, he agreed with his bishop to become a permanent deacon.

Because of his fame and his reputation for social involvement, he was asked to become a peace councilor for the talks between the government and the Revolutionary Armed Forces of Colombia, or FARC. This commitment would eventually force him to flee to Canada.

"I was receiving threats from the FARC and the paramilitary. I always asked them to stop human rights violations: Human life is the most important, whatever the context. But one day, I was told: 'You, you're a military objective.'"

"A man came to see me in my office. We were talking, and he put a gun on the table. He said: 'You have 72 hours to leave this country. If we find you after that, you're a dead man,'" said Lozada.

Forced to flee to Canada with his wife and daughter, he went to Quebec City, where the exhilaration of the first days quickly faded as a new harsh reality set in: cultural shock, learning French and financial difficulties. He received student loans to learn social service in college, but since it was not enough money to support his family, he had to find a job. After being turned down many times, he ended up cleaning buildings.

"I have to confess: The first night I went cleaning, I found bathrooms that were in really, really, bad shape. I cried. I said: 'Lord, what I am doing here?' But after a second and a third night, I started thanking the Lord: 'Thank you, because of this I will have money to feed my family.' We did not want to leech off the system. As a family, we had a dream, and because of that, we wanted to find a job."

The year he left Colombia was the year he was supposed to be ordained a deacon. He had all his papers, and a meeting with Cardinal Marc Ouellet of Quebec would put him back on track.

"When I met with Cardinal Ouellet, I was expecting a cold man. But he took me in his arms and said: 'Welcome home.' This made a difference for me," Lozada recounted.

Cardinal Ouellet -- who lived for a while in Colombia -- made him a pastoral agent and asked him take charge of the Latino community of Quebec City, a role he still plays. Among the 6,000 members of this community, fewer than 300 usually attend Sunday Mass in Spanish.

"Our goal is integration, not to have a ministry among ourselves and become a ghetto. We call it a 'passage' ministry."

He said some moments are harder than others. In August, a Colombian couple from his community, Julian Esteban Muneton Vasquez, 29, and his 8-month pregnant wife, Ingrid Zamorano, 30, died in a car accident when hit by a drunk driver. Lozada knew the couple well.

"Julian and Ingrid came to the Spanish Mass," he said. "They were an example of integration. One year after their arrival, they both had a job. Last September, they were supposed to start university. I blessed her womb during Mass."

Life must go on, he said, just like for all the refugees, including Muslims, now coming to Canada.

"When we have love, it rejects fear. This is what we must have: Love for our neighbor. To offer a welcome that will make a difference. It is up to every one of us to do our part."

"Canada is a welcoming land of peace that has a priceless treasure: its values."