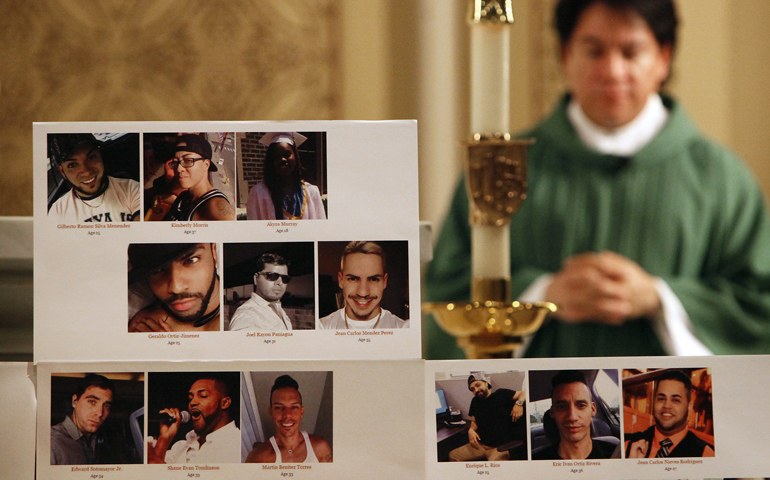 A memorial of victims of the June 12 mass shooting at the Pulse nightclub in Orlando, Fla., are seen June 19 at Chicago's Our Lady of Mount Carmel Church. (CNS/Karen Callaway, Catholic New World)

In a statement regarding LGBT rights in the Catholic church, a group of international Catholic reform groups called for the church "to stand against violence in all its forms — physical, emotional, spiritual and temporal — toward LGBT people."

The statement came from the Network of Reform Movements, a group of international Catholic reform groups that gathered Oct. 17-20 in Chicago to dialogue about the current issues facing the church. The third annual conference was hosted by FutureChurch, the Association of U.S. Catholic Priests and Voice of the Faithful.

Forty-two priests and laypeople from 10 countries were invited to come together to address issues like "women's full equality in the church, clericalism, emerging models of parish life ... [and] LGBT support," said Deborah Rose-Milavec, executive director of FutureChurch and one of the organizers of the conference.

While unable to release united statements on every topic, the group was able to agree on the statement regarding LGBT rights in the Catholic church.

Gramick "gently but persistently" pushed the topic, and "a resolution was drawn up calling for the Church to respect the dignity of every person, no matter what their sexual orientation, and in that way setting an example that might help reduce the violence and discrimination which is still prevalent in many parts of the world," Flannery wrote.

The LGBT statement was first heard during a press conference Oct. 20 and was later issued in a press release from FutureChurch:

We, the representative of an international network of priest groups and reform organizations assembled in Chicago 2016, affirm that the dignity of the human person is clearly expressed in the Gospels and the social justice teachings of our Church. It is this dignity that should be the foundation of a truly Catholic response to lesbian, gay, bisexual, and transgender (LGBT) people and their families.

We, therefore, commit ourselves to stand against violence in all its forms — physical, emotional, spiritual and temporal — toward LGBT people. We encourage the Church's leaders and individual members to make the same commitment.

Flannery told NCR that the conference was a "bringing together" of reform groups to find common strategies to address these issues.

The goals of the conference are to "bring the different groups together, share their experiences, see how each group is working, what their objectives are in church reform and then to see other ways in which all of us, or at least some of us, might be able to work together and in that way be more effective," Flannery said.

Flannery and Rose-Milavec both said there were no proposed goals going into the conference. They said the conference revolved around dialogue; there were no speakers or formal presentations at the event. Attendees participated and dialogued within the large group, as well as in breakout dialogues. Two professional facilitators moderated the groups, and participants were allowed to choose their breakout topics.

Flannery spent most of the conference discussing the fundamental rights of people in the Catholic church, exploring situations in which Flannery said "people's rights are being trampled on within the church." While the group did not come out with a statement, Flannery said they were able to set up a network and a deadline of one year for the group to explore previous research on the topic.

Flannery said he hopes that by the next conference, the group will have a clear proposal on the topic resembling what Flannery called a "declaration of rights for Catholics." But, as Flannery said, "that's a big one, and a lot of work will have to be done on that."

Flannery said though the group was "fundamentally on the same wavelength," there were still times it was difficult for the entire group to agree on strategies to approach the divisive topics. Rose-Milavec said a lot of education still needs to happen, especially when it comes to women's issues.

These differences specifically came up when addressing women's ordination. Because the conference included groups such as Women's Ordination Conference, opinions varied about whether or not ordination was the best way to approach equality within the church.

The Eucharist also was a hot topic at the conference. While the Eucharist was celebrated at this conference, it was not celebrated at the previous conference in Limerick, Ireland. Flannery said leaders of the movement for women's equality see the celebration with a male priest as a continuation of the oppression of women. However, celebrating Mass with joint presiders would put many of the priests at risk of being sanctioned by the church.

"Now, I am already sanctioned by the church ... but I can understand priests who are in ministry would be reluctant to do that," Flannery told NCR. "So that issue is a difficult one for a network of reform groups. And then, you see, if we gather for four days, if we're unable to celebrate the Eucharist together, what does that say about us?"

Rose-Milavec called these discussions "difficult and honest conversations." She said she sees these discussions as a "microcosm" of what's going on in the greater church and said she hopes that similar safe spaces of dialogue can continue at the parish level.

Flannery agreed: "We try to make our voices heard by coming together. We try to encourage each other, sustain people's energies, help them to keep working away at the local level. That's about it. Honestly, I don't expect anything dramatic to happen. The church moves so slowly."

"If anything we're doing now bears fruit in a 100 years' time, I say fine," Flannery added.