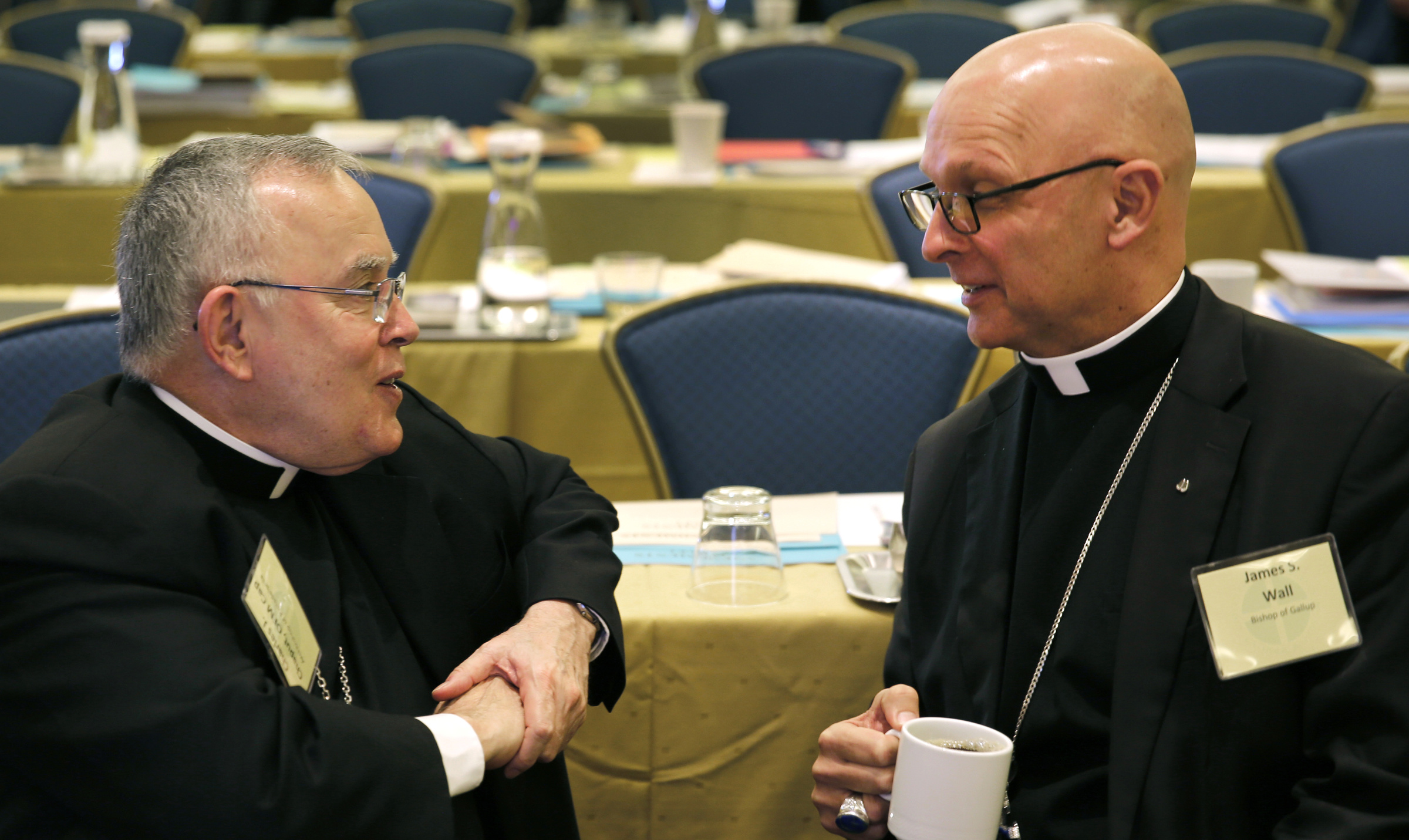 Archbishop Charles J. Chaput of Philadelphia and Bishop James S. Wall of Gallup, N.M., chat during a break at the 2015 fall general assembly of the U.S. Conference of Catholic Bishops in Baltimore Nov. 17. (CNS/Bob Roller)

After recently beginning its third year in bankruptcy court, racking up more than $3.2 million in bankruptcy costs and participating in three court-ordered mediations, the Gallup diocese is on the verge of brokering a settlement with clergy sex abuse claimants.

News of that impending settlement was confirmed by James Stang, legal counsel for the Official Committee of Unsecured Creditors, which represents abuse claimants, in brief statements made to U.S. Bankruptcy Judge David Thuma in Albuquerque Dec. 16.

No details of the financial settlement were provided during the hearing, which lasted less than 15 minutes. The nonmonetary terms of the settlement are currently being negotiated, Stang explained. No timetable was given as to when details are expected to be finalized.

Reaching an agreement with the abuse claimants is a major step toward achieving a consensual plan of reorganization for the diocese, which filed its Chapter 11 petition on Nov. 12, 2013. At the time of the filing, the diocese was facing 13 clergy sex abuse lawsuits in Arizona and an additional number of out-of-court abuse claims.

The past year was particularly tumultuous for Bishop James Wall and the Gallup diocese. Although 2015 was the diocese's 75th anniversary, it was marked by bankruptcy disputes and internal dissension.

Ongoing conflict over insurance coverage stalemated settlement progress for much of the year.

A dispute between the Gallup diocese and its insurers spilled into public view in the spring when attorneys for Catholic Mutual, the diocese's current principal provider of liability insurance, filed a blistering complaint that accused the diocese of being uncooperative in providing information about clergy sex abuse claims. Attorney Victor Ortega said the diocese "placed every conceivable roadblock in the path of Catholic Mutual's quest for the vital and necessary information."

That complaint was followed by two court hearings marked by bickering and sniping between attorneys for the diocese and attorneys for its insurers.

Catholic Mutual's complaint also included a reference to one claimant's recent allegation of sexual abuse that allegedly had happened a year earlier, in July 2014. Despite repeated media requests, diocesan officials have refused to answer questions about the identity of the alleged offender, if he or she is still in ministry, if the allegation was turned over to law enforcement and if the allegation has been deemed credible.

While the diocese and Catholic Mutual eventually mended their rift, other insurance disputes over coverage, policy limits and terminology continued to be the subject of court hearings and motions between different parties as the bankruptcy case's first two mediation sessions were scheduled, held and subsequently failed.

Robert Pastor and John Manly, attorneys for abuse claimants, attempted to break the bankruptcy stalemate by filing motions for stay relief. With the diocese's Chapter 11 filing, an automatic stay was triggered that had halted all pending litigation against the diocese.

Pastor and Manly requested the court lift the stay so several of their sex abuse lawsuits could move forward in Arizona state court. The Gallup diocese covers parts of northwestern New Mexico and northeastern Arizona.

The committee representing abuse claimants supported the move. Committee attorney Stang asserted the bankruptcy was "at a near dead stop" and argued that allowing civil trials to proceed would "force the debtor and its insurance carriers to make a reasonable evaluation of the claims" and break the legal logjam.

The Gallup diocese and its insurers filed motions in opposition. Susan Boswell, the diocese's lead attorney, objected to the stay being lifted for any claim that was not covered by insurance, a position Thuma would later echo.

The bankruptcy case took a brief detour from those disputes when the diocese held two property auctions in Phoenix and Albuquerque. In addition to generating only about $160,000 in profits for the diocese, the auctions garnered considerable negative publicity. Catholic Charities Director Debe Betts complained to a local newspaper that the diocese had listed a Vincent de Paul Society food bank building in Arizona and a Catholic Charities building in New Mexico for auction without the knowledge of those organizations.

Officials at St. Bonaventure Indian Mission had voiced similar complaints earlier in the year. The Catholic mission, located 30 miles from Gallup, runs a school and charitable programs for needy Navajo families. Director Chris Halter appealed to the media after the Gallup diocese made plans to appraise — and possibly sell — property the mission had used for decades.

More negative publicity was generated when auctioneer Todd Good of the Accelerated Marketing Group barred a newspaper reporter and a member of the public from observing the Albuquerque auction.

Thuma ordered a hearing, and Good and Boswell submitted sworn declarations to the court that it had been Good's "custom and practice not to admit non-bidders" to auctions throughout his career. After Thuma's ruling, in which he declined to invalidate the auction, it was learned that Good had allowed reporters into his auction for the Tucson, Ariz., diocese's 2004 bankruptcy, a case also overseen by Boswell.

In October, as the second anniversary of the Chapter 11 filing approached, a clearly frustrated Thuma warned attorneys that if a settlement wasn't achieved by the end of the year, he would consider lifting the automatic stay to allow a few select abuse claims covered by insurance to proceed to trial.

Soon afterward, Houston attorneys Donald Kidd and Richard Fass, who also represent abuse claimants, filed a motion for relief from the automatic stay on behalf of 15 claimants whose cases are covered by insurance.

In imposing his year-end deadline, Thuma appeared to be responding to an earlier request made by Pastor, who argued that insurance companies "need to feel that they're going to be exposed to a significant risk before they move. And we need to have that backstop and that backstop is a jury trial."

In early November, as the parties in the Gallup diocese bankruptcy made plans to meet for their third mediation, a Minnesota jury handed down an $8.1 million award against the Duluth diocese on behalf of a single abuse survivor. On Dec. 16, attorneys in the Gallup bankruptcy confirmed a settlement agreement was in the works.

[Freelance reporter Elizabeth Hardin-Burrola has been covering the Gallup diocese since 2002.]