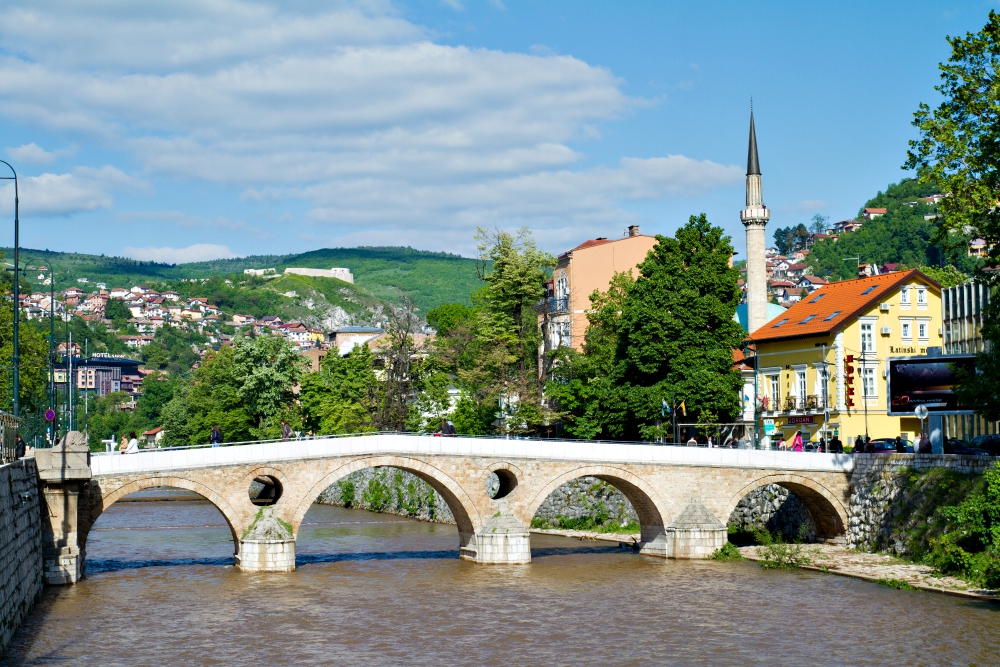 The Latin Bridge in Sarajevo, Bosnia-Herzegovina. Theologians from about 80 countries are to gather in Sarajevo July 26-29 for a conference called "A Critical Time for Bridge-Building: Catholic Theological Ethics Today." (Wikimedia Commons/Tumi-1983)

Nearly 500 moral theologians and ethicists are to gather at the end of July for a first-of-its-kind meeting focused how they can respond to the shifting global geopolitical environment and address contentious issues such as climate change and migration.

Participants from about 80 countries are expected to take part in "A Critical Time for Bridge-Building: Catholic Theological Ethics Today," a July 26-29 event being held in Sarajevo, the capital of Bosnia-Herzegovina.

Among the presenters will be a number of the most eminent voices in ethics, including Paul Schotsmans of KU Leuven in Belgium, Linda Hogan of Trinity College Dublin, and Fr. Charles Curran of Southern Methodist University in Dallas.

Jesuit Fr. James Keenan, one of the main organizers of the event, said it is geared toward finding ways for academics in different parts of the world to network so they can discern with one another how to increase impact in their local contexts.

While Keenan's group, Catholic Theological Ethics in the World Church, hosted two previous large-scale international conferences in 2006 and 2010, this is its first organized with the hope of provoking social action.

"This is a conference that's very different," said Keenan, one of three co-chairs of the group and the director of the Jesuit Institute at Boston College. "This conference is about action. Almost everything is about: 'What am I doing? What are we doing? How can we do this?' It's not about reporting out data; it's about action."

Sigrid Müller, who is the dean of the faculty of Catholic theology at the University of Vienna and will attend the conference, said the event is taking on particular importance as populist leaders in various countries are "talking about building walls and fences to defend national concerns."

"In such a political atmosphere, it's very important that ethicists gather who really ... maintain a concern for humanity on a really international scale," said Müller, who is also a member of the international theological group's European regional committee.

"As ethicists, I think we really have to call for a new responsible way ... to find solutions on a global level, because these problems cannot be confined just to one nation-state," she said. "They have global origins."

Catholic Theological Ethics in the World Church, a network of academics that now includes some 1,000 members, first launched in 2006 with a conference in Padua, Italy, that focused on opening a cross-cultural exchange among ethicists.

A second international conference was held in 2010 in Trent, Italy, before the group kicked off a series of regional events in places as diverse as Bangalore, India; Nairobi, Kenya; Berlin; Krakow, Poland; and Bogotá, Colombia.

Keenan said the event in Padua, the first such gathering of global ethicists, "was about listening to one another." The conference in Trent, he said, "was about getting a sense of history."

"Now, it's about the present," he said. "It's about us being in a kairotic moment in which we have environmental problems and we have this enormous problem on migration and refugees."

"The third event is about the present, and about action," he said. "It's about urgency."

The four-day conference is organized in three parts:

The academics chosen to present throughout the event represent a wide range of diverse national backgrounds and professional history. An opening panel, for example, includes Schotsmans, a widely published and respected authority on medical ethics, and Margaret Ssebunya, a doctoral candidate at the University of KwaZulu-Natal in South Africa.

Pablo Blanco, who holds a chair in moral theology at the Pontificia Universidad Católica Argentina, will present on the closing plenary panel of the conference. Blanco said he thinks the event is seeking to "approach reality not considering only a theoretical view of the world, but trying to find out how much God is present in reality."

Blanco said he finds the decision to hold the conference in Sarajevo, which was under a brutal almost four-year siege during the 1992-95 Bosnian war, particularly significant. "To be there is to be near injustice," he said. "To go to Sarajevo is to listen to the call of Pope Francis to go to the periphery."

Müller noted that Sarajevo, situated east of the Adriatic Sea from Italy and west of Serbia, has a history of interreligious cooperation, with a Muslim majority population but significant communities of Orthodox Christians and Roman Catholics.

"I think it's also a sign of the challenge we will face, that in the future we will need much more interreligious dialogue and cooperation," she said. "Ethical concerns maybe also can unite different religious groups in the task to help and to bring forward society and to solve problems."

Editor's Note: McElwee is part of a panel on ethics and public discourse at the Catholic Theological Ethics in the World Church gathering in Sarajevo.

A version of this story appeared in the July 27-Aug 9, 2018 print issue under the headline: Theologians to meet in Sarajevo to talk ethics, action.