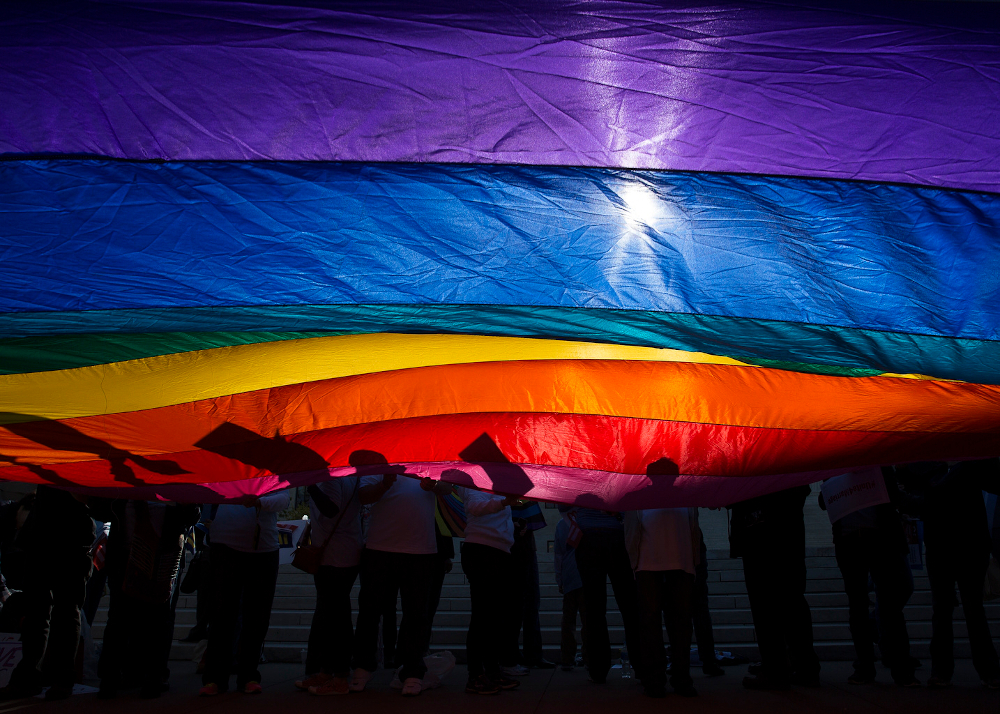 In this 2015 file photo, LGBTQ rights supporters wave a flag outside the U.S. Supreme Court in Washington. (CNS photo/Tyler Orsburn)

The Congregation for the Doctrine of the Faith (CDF) on March 15 published something called a responsum, along with explanatory note, that reiterated the Vatican's longstanding position that it is "illicit" for Catholic priests to bless same-sex unions.

But in a rare display of open disagreement with the Vatican, bishops from several different countries immediately criticized the CDF intervention.

"The pain the Church has caused them is today my pain"

"I feel ashamed for my Church. I mainly feel intellectual and moral incomprehension," said Bishop Johan Bonny, 65, of Antwerp (Belgium).

"I would like to apologize to all for whom this responsum is painful and incomprehensible. The pain the Church has caused them is today my pain," said Bonny, a Rome-trained theologian who worked at the Pontifical Council for Promoting Christian Unity from 1997 until his episcopal appointment in 2008.

"Controlling who can or cannot receive God's blessing — this is inadequate and wrong," said Franz Kreissl, director of pastoral services for the Diocese of St. Gallen in Switzerland.

"It is not permissible to exclude a certain group from the outset as a 'sinner,' without taking into account each individual concerned," Kreisel continued in a statement published March 16 on the diocesan website.

"The mission of the Church is to bestow this blessing from God and to promise it to the people — not by its own means, but as an intermediary," said St. Gallen's Bishop Markus Büchel.

"Especially at a time when deeply hidden sins committed [...] in the name of the Church are being brought to light, it is comforting to know that God's blessings are for all," he said.

The 71-year-old bishop has been speaking out since 2015 for a more tolerant attitude from the institution on the issue of same-sex couples.

An "understandable reaction of disappointment"

On the other side of the Rhine, Bishop Georg Bätzing of Limburg said he was "unhappy" with the new note published by the Vatican.

"It gives the impression that the theological debate, which is currently being discussed in different parts of the universal Church, including here in Germany, must end as soon as possible," lamented the 59-year-old Bätzing, who is also president of the German Bishops' Conference.

He said he had hoped the Vatican would refrain from making any statement until after the issue could be discussed within the framework of the Synodal Way, a type of national synod the Church in Germany began in 2019.

Meanwhile, Cardinal Blase Cupich of Chicago — who also did theological studies in Rome — underlined that the CDF note offers "nothing new on the Church's teaching".

But he acknowledged that "the understandable reaction among many to this response will be disappointment".

"This should prompt us in the Church... to redouble our efforts to be creative and resilient in finding ways to welcome and encourage all LGBTQ people in our family of faith," the 72-year-old cardinal emphasized.

In France, the publication of the CDF text has aroused a sense of anger and incomprehension in LGBTQ+ Christian movements and associations.

"What is disappointing is that we had the feeling that some things were moving on the ground, especially in dialogue with the dioceses," lamented Cyrille de Compiègne, spokesperson for the Association David & Jonathan.

"And here we find ourselves with the same rhetoric as in the 1990s," he told La Croix shortly after the CDF responsum was released.

"The subject was put on the agenda of our last meeting," said Bishop Bruno Feillet, who heads the French Episcopal Conference (CEF) office for the family.

"Within the national office, people involved in supporting those concerned were moved and distressed by this note," said the 61-year-old moral theologian and auxiliary bishop of Reims.

He said it was unfortunate that many in the media immediately highlighted connection between "homosexuality" and "sin," he pointed out that homosexuals "as individuals, can, of course, always be the object of blessings."

"It is the same-sex relationship that cannot be the object of the blessing, because to bless it is to encourage its continuation," Bishop Feillet said.

But claimed that "not all are concerned" with the issue.

"Between a quarter and a third of the dioceses in France currently have people or pastoral services dedicated to accompanying homosexuals," he said.