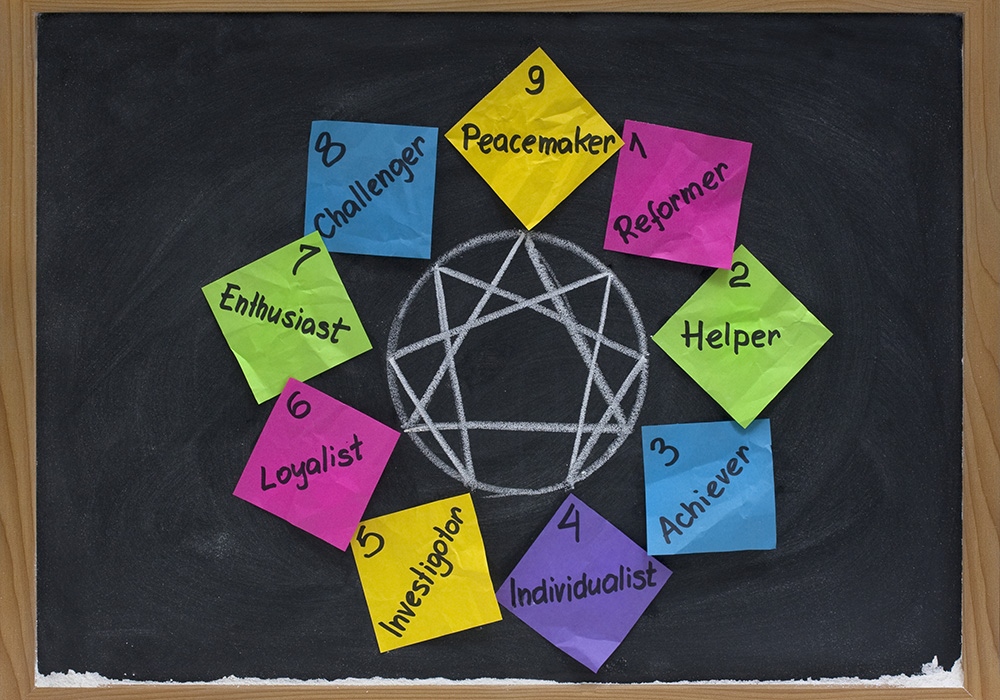 In the past several years, the enneagram has become a pretty popular tool for categorizing and understanding personality. From certified coaches and Instagram influencers to being an entertaining subject of memes, the enneagram is popping up all over the place. While some think it is "Christian astrology" or pseudoscientific, there is empirical research that has shown internal reliability among certain enneagram tests, and many have found it useful for supporting greater self-awareness, compassion and personal growth.

The origins of the enneagram are also disputed, some saying it dates back to fourth century Christian mystic Evagrius Ponticus and his categorizing system for eight prevailing temptations known as the Logismoi, others looking to Sufism, and still others believing it came about through a combination of many religions and cultures from as far back as at the desert fathers and mothers or even the time of Babylon.

The word "enneagram" (pronounced ANY-a-gram) comes from the Greek words ἐννέα (ennéa, meaning "nine") and γράμμα (grámma, meaning "written" or "drawn"). It is a typology system for understanding and organizing personality traits.

The nine types are illustrated by nine points of a geometric figure constructed from connecting and intersecting lines. Each type is characterized by underlying deep desires, needs and motivations which manifest in how a person behaves in stress or in growth. There are aspects of all nine types in each of us, though typically one is most prominent; one core motivation drives us most powerfully.

In Franciscan Fr. Richard Rohr's book (co-authored by Andreas Ebert), The Enneagram: A Christian Perspective, the authors unpack each type in rich detail using Christian and Catholic language and imagery that helps ground an understanding of the types in faith. The nine types are each assigned a "root sin" or "passion" and a "root grace" or "virtue" as a way of grounding the core motivations, shadows and gifts of each type in the Christian tradition.

For Catholics, the question of whether or not the enneagram is a resource for or hindrance to spiritual growth is debated. Cautionary language from the 2003 Vatican document "Jesus Christ, the Bearer of the Water of Life: A Christian Reflection on the 'New Age' " suggests the enneagram may be the latter, stating that it "introduces an ambiguity in the doctrine and the life of the Christian faith" and grouping it in with all New Age para-religious practices worthy of skepticism or denunciation. It's curious to me when Catholics are skeptical of certain practices, philosophies, and understandings from other cultures or traditions, considering our own faith is so shaped by syncretism and Aristotelian philosophy.

Yet, in my own experience, I have found it to be the former, a tool for deepening my relationship with God that is easily integrated into a Christian understanding and practice. The enneagram is in no way meant to take the place of God or become a false idol; rather, it can be an instrument of grace, drawing us closer to God as we understand ourselves and others better. The enneagram has helped me to more honestly examine my conscience, grow in compassion toward others, and reflect on the unique ways I am called to reflect the image of God.

A psychology major in college, understanding personalities and behavior motivations has always been a keen passion of mine. Growing up, I used to be very into astrology, but it was actually my psychology education and my hobbyist interest in astronomy that made my belief in it wane.

As I progressed in my psychology study, learning about attachment theory, levels of development, and various personality indices, I found other systems for understanding personality more helpful and grounded than astrology. When I discovered the enneagram, it struck me as a beautiful way of integrating psychology and spirituality.

I first came across the enneagram on an online dating profile that featured a description of his interests and aspects of his personality, including the notation: "4w5." I googled the inscription and came across the enneagram Type Four with a Five wing. Type Fours are known to be in touch with their emotions, creative and nonconformist, all things I identified with or aspired to be.

Intrigued, I took several free online quizzes to see what type I was. Most of those quizzes tend to give you a few types that you are most like. Type Two, closely followed by Types Four and Three (all Heart Triad types) came up pretty prominently for me, and I was driven to dig deeper into what it all meant.

At the time, I was working as a youth minister while also pursuing a career in music. I've always considered myself quirky and artistic (Type Four traits), but I also grew up slightly parentified being raised by a single mother, along with my sister, who is six years younger. I sometimes felt that my worth and identity was in being needed (a core motivation of Type Two). I love making art, but I'm most fulfilled when it's connected to being of service to others. So, while I could see myself in a lot of elements of Type Four, I most strongly identified with Type Two.

Later, on a road trip to Sacramento from Los Angeles, I listened to a series of videos of a conference led by Rohr on the enneagram and the discernment of spirits. He dives deep with self-effacing humor, clarity and wisdom into each type. Rohr suggests that for whichever type you hear about and cringe at most, that's usually a good indicator it's your type.

When I read the description of Type Two in Rohr and Ebert's book, it gutted me. Rohr writes that pride is the root sin of Type Two because our need to be needed often manifests in helping others, and in believing that we are the only people equipped to do so. He goes on to say that an "indirect egotism", seeking to get our own needs met by meeting the needs of others, tends to lead to resentment and lack of fulfillment in relationships.

I began to recognize the ways I often ignore my own needs and tend to those of others. This can manifest in ministry, but also as workaholism and self-escaping. It can also look like self-sufficiency or practical atheism, forgetting my fundamental need for God. Rohr talks about how for Type Two, the Christian rhetoric of always putting others first is actually like a "kryptonite" because Twos will pour themselves out until they're running on empty.

For Twos, the antidote is learning to uncover and express our own needs and to find others who respect and can meet those needs. Understanding these core motivations helps in the discernment of spirits because the false spirit will attempt to use a Two's desire to be helpful to move them toward prideful micromanaging, having an overinflated sense of responsibility, and self-neglect while the Holy Spirit will help the Two to grow in humility, seeking help from God and others, so that they can be free to be of service in innovative, life-giving ways.

When it comes to discerning or identifying one's type, many enneagram experts suggest that each person read the descriptions and self-identify with the one that most deeply resonates. As much as it can be tempting when first learning about the enneagram to try and type others, doing so is discouraged because a huge part of understanding your type is getting in touch with your true self, rather than seeing yourself through others' opinions of you.

Accordingly, when a person gets to know their own type and shares it with you, it's helpful to receive that information with gratitude and respect for the other's vulnerability and authenticity, and let it help you to better understand them.

When the enneagram is used as a tool for understanding others and supporting self-awareness and growth, it can be an asset in our lives as people of faith. We are called to be Christ-like — to know our intrinsic identity as beloved children of God and to let our sense of belovedness flow into service to others. Seeing ourselves as fully as God sees us, through God's loving gaze, helps us to embrace ourselves and be integrated in our discipleship.

The enneagram can support and deepen our insight into ourselves, and fuel our call to metanoia (conversion of our hearts) and mission. When we understand our deep needs and desires, we can better discern our vocation with God and more fully become who God created us to be.