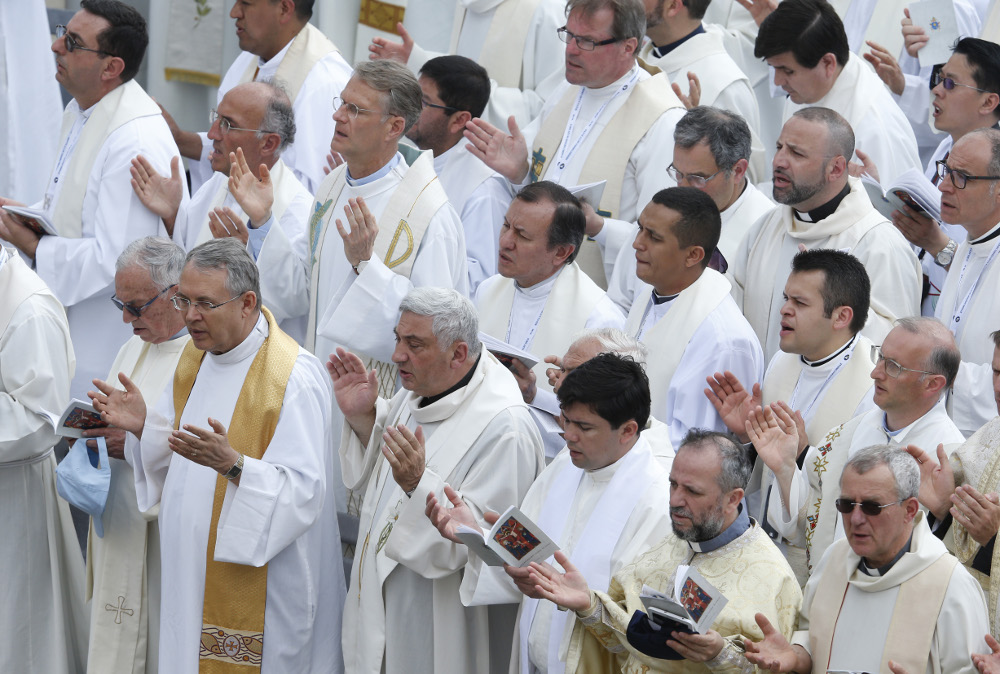 In this 2016 file photo, priests pray the Lord's Prayer as Pope Francis celebrates Mass for the Jubilee of Priests in St. Peter's Square at the Vatican. (CNS/Paul Haring)

The decisions come after the French bishops decided that beginning early December last year, French Catholics would change the line, "Lead us not into temptation," to the equivalent of "do not let us enter into temptation."

The issue got wide attention after Pope Francis discussed the line, "And lead us not into temptation," with Fr. Marco Pozza, a Catholic prison chaplain, Dec. 6, as part of a television series on the Lord's Prayer.

Pope Francis said the Italian and English translations of the "Our Father" can give believers the wrong impression that God can and does lead people into temptation. He told Pozza, "I'm the one who falls. But it's not (God) who pushes me into temptation to see how I fall. No, a father does not do this. A father helps us up immediately."

The Catechism of the Catholic Church, in its discussion of the Lord's Prayer, says, "Our sins result from our consenting to temptation; we therefore ask our Father not to 'lead' us into temptation. It is difficult to translate the Greek verb used by a single English word: The Greek means both 'do not allow us to enter into temptation' and 'do not let us yield to temptation.'"

The New American Bible, revised edition, is the basis for the Lectionary used at English-language Masses in the United States; the petition from the Lord's Prayer in Matthew and Luke is translated as: "do not subject us to the final test."

The German bishops' conference announced Jan. 25 that after in-depth study, it would keep the line, "And lead us not into temptation," unchanged, particularly to use the same wording as most Catholics and most other Christian denominations. But, it added, it would like to see more done in offering the faithful a clear and fuller explanation and discussion of the prayer's meaning.

The line in the prayer, the bishops' committee said, is not about persuading God to not tempt the faithful, but rather it is a recognition of one's own weakness and one's trust in God's guidance — that he does not lead people to make the wrong choice.

However, when the Italian bishops' conference adopted a new translation of the Bible in 2008, they chose "do not abandon us in temptation" for the Lord's Prayer both in Matthew 6 and Luke 11. The Lectionary also contains the change and received Vatican approval.

The conference has now called for an extraordinary assembly of bishops to meet Nov. 12-14 to discuss and approve the third edition of the missal, which would use the changed wording of the Lord's Prayer for Mass and other liturgical rites.

Cardinal Giuseppe Betori of Florence, a noted biblicist, said study of the prayer had begun in 1988. The problem, he told the newspaper Avvenire Dec. 10, was the Italian verb ("indurre") that had been used "is not equivalent to the Latin 'inducere' or the Greek."

The Latin and Greek terms suggest a form of concession — letting something enter, he said, while the Italian verb "is coercive," with English equivalents such as: "induce," "inspire" or "persuade."

Both Betori and the German bishops said they were pleased Pope Francis' comments brought wider attention to the prayer and greater discussion of its meaning.

It was important to "seize the opportunity" and offer better explanations, the German conference wrote.