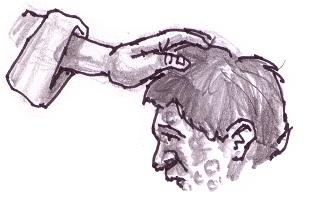 After the exorcism performed in the synagogue in Capernaum, followed by a great number of healings in the town, Jesus continues to expand his ministry of preaching and liberation in a dramatic encounter with a leper. God's grace goes freely from synagogue to neighborhood to the outer fringes of society to an untouchable.

It is as though the leper, having heard of the many cures in Capernaum, seeks out Jesus to ask, "Will you heal me as well?" The leper may have believed he was being punished by God, and we sense hesitation in the his request. Perhaps he feared he was not worthy.

Jesus not only reassures the man, but he reaches out and touches him. If his disciples were with him, we might imagine them pulling back to avoid contamination from the approaching leper. It is a moment of pastoral formation for them. If they are to do the work of Jesus, they must be ready to enter the lives of the outcasts, the “contaminated’ and the sinful.

Jesus shocks them and others who sought to avoid contamination by those deemed physically and morally "unclean." They will see him seek out and eat with tax collectors and prostitutes to demonstrate that God's mercy is for them as well. His disciples are to do the same.

The fear of contamination can keep well-intentioned people from extending help to poor and homeless people in our society. The deadly AIDS crisis was complicated by misguided fears of touching victims, and then it was made much worse by religious views that a serious medical disease claiming hundreds of thousands of lives was God’s punishment for sin. God's mission of mercy and grace embraces all people, especially anyone who needs understanding and compassion in a crisis.

A child was once told by his parents not to associate with "bad" children because it would make him bad. He asked them if it was possible for a “good” person to make a bad person good.  A child’s question opens up the complexity of life. Jesus moved across the lines dividing society into safe and unsafe zones, good and bad people. He risked contamination from sin in order to show contamination by love. To follow him is to cross the threshold into the perilous but promising kingdom of God.