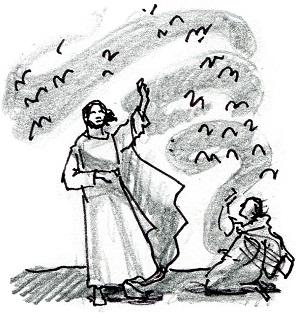 “A house divided against itself cannot stand” (Mark 3:23).

Jesus was attacked in the severest terms possible when opponents accused him of being an agent of Satan: “It is by the prince of demons that he drives out demons.”

Jesus dismisses their charge as totally illogical, since why would Satan drive himself out? If this were the case, the kingdom of Satan would be divided against itself and could not stand.

In his classic 1988 commentary, Binding the Strong Man, scripture scholar Ched Myers saw in this passage of Mark the key to understanding the cosmic drama behind the narrative of Jesus’ ministry. Up until now, Satan had held sway over the world, controlling human activity by intimidation and demonic possession, causing every kind of illness and suffering and sowing conflict and distrust between people to prevent them from achieving community.

Jesus declared an end to this reign of terror because the “Kingdom of God” had broken into the world. His exorcisms and healings were proof of this, for Satan was the strongman who has been bound and his house plundered. To accuse Jesus of being possessed by Satan was the ultimate sin against the Holy Spirit, an affront to God.

Secular culture would hardly describe a conflict in these spiritual terms, what St. Paul called the principalities and powers raging against God. Yet French General Charles deGaulle once described World War II in Europe as a contest between the Archangel Michael, patron of France, and the dark angel of Hitler’s National Socialism. The cosmic imagery conveys the pervasive, cultural and historical forces that converged to unleash such destructive violence. For deGaulle, it was a battle between principalities and powers.

Today’s Gospel calls us all to a renewed awareness of Jesus’ message that the Kingdom of God is more powerful than any other force in the universe or history. Yet, we must be its agents in our time. The best counter-offensive to fear and division is faith and reconciliation. Our own house is only as secure as the justice and love we bring to our own society and nurture in our own hearts.