In today's Gospel, a crippled woman is healed, and a synagogue official scolds Jesus for violating the law about "working" on the Sabbath. The scene is familiar as one of many "tests" Jesus' enemies set up to discredit him. In another story, a woman caught in adultery is paraded before Jesus to see if he will oppose the law about stoning sinners. The Sadducees also cynically test Jesus about a woman married to seven brothers to challenge the idea of resurrection.

In each instance, the women are used as objects by men with disregard for their personal welfare. But in each instance, Jesus addresses the women as persons and acts to protect their dignity. In today's gospel, he calls the crippled woman a "daughter of Abraham" before restoring her to health. Her 18 years of bondage suggests an even deeper lesson, that since Abraham was called 18 centuries before, no legal requirement had ever saved anyone. Only grace can liberate, as he is doing that day in the synagogue by liberating the woman from the burden of the law by loving her.

We are all called to give love the first place in our lives and our expectations of one another. Love fulfills every law and sets us free. This is the joy of the Gospel. 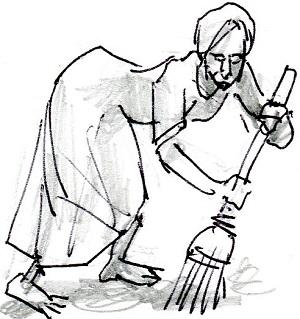