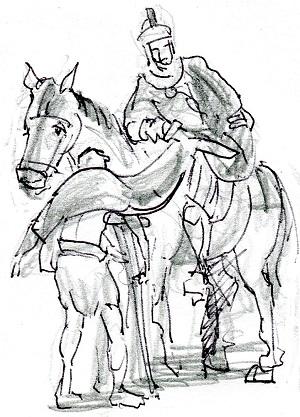 "Whoever seeks to preserve his life will lose it, but whoever loses it will save it" (Luke 17:34).

In today’s Gospel, Jesus uses the image of the great flood to emphasize the decisiveness required of every disciple. Change can happen suddenly, and normalcy becomes crisis. Only those prepared to move with the Spirit, committed to the self-sacrificing love Jesus showed us, will come through it.

Today we also commemorate the life of St. Martin of Tours (316-397), a fourth-century Roman soldier who underwent a deep conversion after an encounter with a poor beggar, with whom he shared his cloak, only to discover later that it was Jesus.

Martin left the army and eventually became a bishop in Gaul (France). Martin lived at a time of major historical change that marked the decline of the Roman empire and the rise of Christendom. His faith enabled him to read the signs of the times, let go of one life and welcome a new one in Christ.

We all face moments of crisis that feel like our world is coming to an end, both personally and in larger social and cultural shifts. We are in such a transition right now, and trusting the Spirit is the key to finding the path forward. We pray for insight and courage.

The Lectionary delivers some irony this Veteran’s Day by honoring the patron saint of pacifists. Radical pacifism characterized the church until Constantine made Christianity the official state religion and the “just war” theory gradually influenced church teaching.