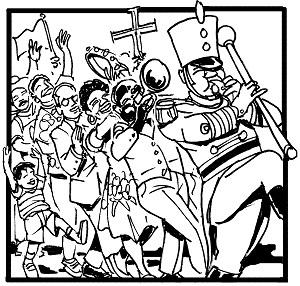 Solemnity of All Saints

The Beatitudes define those we call saints, those who have lived out their lives in this world with an eye to the world to come. Their commitment to Christ came at a cost. They are the poor in spirit, the mournful and the meek, the people who hungered and thirsted for justice, the merciful, the clean of heart, the peacemakers and the persecuted.

The Beatitudes describe the tension between the promise and the fulfillment, the vision and its realization. This was clear in the early church as the followers of Jesus stepped apart from the tribal, family, ritual and social loyalties that defined them, and from the honor culture that gave them respectability as righteous Jews. Like Jesus himself, his disciples adopted a new value system that exposed them to the outcasts he had embraced. They publicly proclaimed as their Lord a man who had been expelled from the synagogue, condemned by the Sanhedrin as a heretic and executed by Roman authority as a dangerous subversive.

It may be hard for us to recognize ourselves today as part of that rag-tag movement of Christians, but these are the people we honor as saints. Think of Oscar Romero, murdered by the Salvadoran government, Mother Teresa, advocate for the rejected, the poorest of the poor on the streets of our gleaming cities, or Maximillian Kolbe, taking the place of a fellow prisoner in a Nazi death camp.

In our ordinary way, we say we aspire to be like these saints on the day we honor their courage and self-sacrifice for the Gospel. May it be so, for grace follows quickly wherever prayer opens our lives to daily opportunities to be Christlike. May we join the ranks of the great cloud of witnesses that surrounds us today, cheering us on. Blessed are you for letting the promise take hold in your heart.