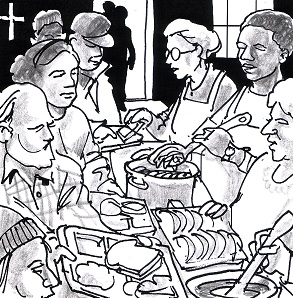 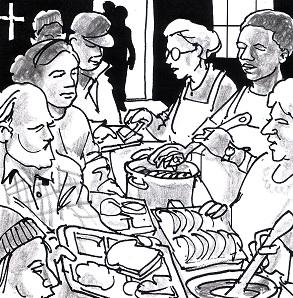 Jesus’ critique of table protocols was really an attack on the social networking of his culture. The only way to rise within the hierarchy of important friends was to first be invited by someone, then to reciprocate your way up the ladder of class and status to take your place among the elites.

As he became more popular, Jesus was apparently invited to dine with important people, some with a sincere interest in his teachings and others critical of him who used formal dinners to test him and find fault. In today’s Gospel, Jesus used such an occasion to preach his radical, upside-down message of first and last in God’s eyes. But before he delivers this challenge, he entertains the guests with some clever social wisdom that must have gained their approval and set them up for his closing remarks.

Jesus tells a parable about a self-important guest who assumes he is the guest of honor and takes his place at the head table. Wrong! For his presumption, the man is sent to the last place when a more favored guest arrives.  If only he had played the humble card and put himself last, he would have been invited up higher, gaining the esteem instead of the ridicule of the other guests. Jesus scores with a great after-dinner joke, and everyone, including his host, is pleased. He is playing the game perfectly and will likely be invited again and by other hosts who want to showcase his popularity at their own tables.

But if Jesus has earned some social capital, he quickly squanders it by proposing to his host the most politically incorrect idea imaginable. The next time you throw a banquet, don’t invite your friends, family and rich neighbors. Invite the poor, the blind and the crippled precisely because they can’t repay you. Then you will score real points with God and be honored when the righteous gather at the table of the resurrection.

I imagine some guests laughing out loud, thinking this was another joke until they realized that Jesus was serious. A shocked host and other guests left the hall, but imagine the reactions of the servants and kitchen staff to hear about a world in which the high and mighty were last while the lowly were lifted up.

Many years ago at the Democratic National Convention, a then-popular, young Jesse Jackson spoke to the delegates about their proposals to address racial and economic equality in the party platform. The speech rose above the usual rhetoric when Jackson asked the crowd to consider the reality of the hundreds of workers in surrounding hotels who had made their beds, cleaned their bathrooms and served them at table.  Jackson was invoking a dream that did not yet exist in America, but one that resonated deeply with the Beloved Community Dr. Martin Luther King Jr spoke of so often in his sermons and speeches on behalf of civil rights.

Jesus chose his place among the poor, the powerless and the outcast of his time, and he never missed a chance to remind people that God was to be found there as well. If we want to find our place and hope to rise to the occasion, God’s banquet is the one party we don’t want to miss.