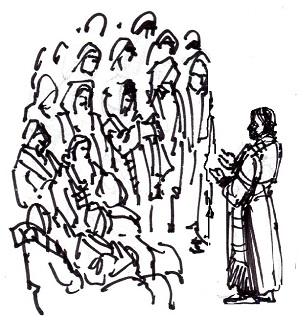 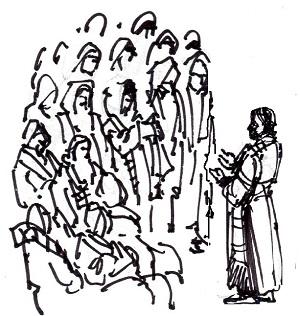 "They were plotting to catch Jesus at something he might say" (Luke 11:54).

As the U.S. mid-term elections come down to the wire, the media are flooded with attack ads depicting the candidates in the worst possible light for everything negative or questionable they have ever said or done.

Political historians can assure you that this is nothing new, but today's social media and web reporting have accelerated and saturated global attention with 24-7 coverage of every skirmish or disclosure, whatever its actual merits or motivation.

Luke's gospel today tells us that Jesus was subjected to this kind of vicious scrutiny in his stand-off with the religious leaders of his day. They tried to undermine his reputation, declare him a heretic, to bring down Roman power on his head and even divide his movement with secret plots to betray, arrest and execute him.

What brought the gentle, patient Jesus we know from so many gospel stories to today's level of indignation and counter attack? Jesus reserves his sharpest rebukes for leaders he saw as hypocrites, those who said one thing and did another, who used their positions to mislead others and who, in effect, were blocking access to God's mercy by ordinary people who looked to them for guidance and compassion. "You hold the keys, but do not enter and keep others from entering!" he says to those who were using legalism and theological confusion to condemn others in need of God's mercy.

The doors are open and the light is on for anyone looking for God. This is the joy of the Gospel, and no authority on earth can prevent people from encountering the loving face of God in time of need, failure and sin. There are no toll gates or moral checkpoints that can keep people from forgiveness and union with the merciful Abba Jesus revealed in himself and in his preaching. He gave his life on the cross that we might have the gift of eternal life.

It is always darkest before the dawn, so let us walk forward together into the light, saint and sinner, winner and loser, whole and broken. All are welcome. God calls us friends and waits to embrace us each day and at the door to eternity.