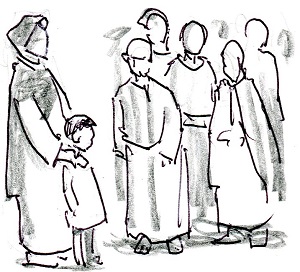 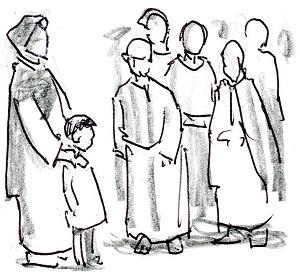 “Be perfect as your heavenly Father is perfect” (Matt 5:48).

When I was growing up in the 1950s, my father worked full time and my mother was in charge at home. She kept track of seven children and, along with meals, laundry and housework, kept the peace. Most of our squabbles were minor and verbal, though she could also administer first aid when needed.  She kept order by appealing to our better angels. One of her favorite approaches was to ask us to be “big,” more mature than we were acting. If that didn’t work, she waited for my father to adjudicate when got home, a threat that always overshadowed the rest of the day.

When Jesus capped his instructions on forgiveness with the appeal to be “perfect as your heavenly Father is perfect,” the word he used meant “maturity,” or wholeness, completeness.  God is singularly complete, the finished image all creation strives for.  Human imperfection, the source of so much conflict and tension, is because we are immature, lacking in that larger spirit of love that prompts us to forgive each other because we are all guilty of the same faults and weaknesses.

Jesus took forgiveness to a radical level when he told his disciples to love their enemies and pray for those who persecuted them. But this followed logically from the fact that they were God’s children. This was the way God loved them, despite their faults, so they imitated their heavenly Father when they showed others the same unconditional love.

This teaching was radical in another way, since it challenged common scriptural images of a just God who was often wrathful and unforgiving when his subjects broke the covenant, pursued false gods and did heinous things.  In Kings 21, God vows through Elijah that Ahab and his wicked wife Jezebel would be devoured by dogs and carrion for murdering Naboth to take his vineyard. The story is typical of an evolving portrait of God in the Hebrew Bible as an anthropomorphic reflection of human vengeance and immaturity.

The entire Sermon on the Mount was a radical update of ancient images of God that were replaced by Jesus’ revelation of the God of Love.  He proposed a new vision of human community that rejected vengeance and retribution as the only way to maintain law and order in a brutal world. There was a better way, and it began with forgiveness and being bigger than people were acting, to the benefit of no one and the misery of everyone.

Jesus preached God’s mercy and modeled it by befriending sinners, healing the sick, casting out evil spirits, treating his enemies with respect and assembling a sampler of broken humanity for his intimate circle of followers. He loved them to the end, laying down his life for them and for the world, in St. Paul’s startling phrase, “while we were sinners” (Rom 5:8).

This is why we love our enemies and pray for those who hurt us, not because it makes everything perfect, but because it makes us perfect as God is perfect. This family resemblance is our witness to the world and our best hope to belong to the Beloved Community Jesus preached and gave himself to make possible.