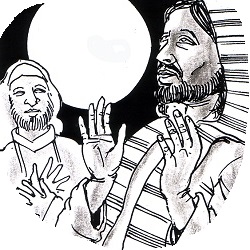 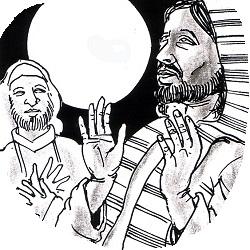 I have vivid childhood memories of a table radio my father brought home for us with vacuum tubes and a large dial you turned to move across a lighted field of several spectrums that brought in both music and ship-to-shore radio signals. Its most amazing feature was a small window under the dial with a green oscilloscope that showed the bandwidth amplitude of the signal you were trying to bring in.

I know little about radios or whether my description is correct. Yet, even the terms filled my child’s imagination as I picked up faraway stations and distant countries sending signals over the airwaves. I remember how thrilling it was to see the green window flare when I found a strong signal.  This memory is a metaphor for a different kind of thrill I hear in today’s Gospel reading.

Mark is the shortest Gospel and his style is simple and concise. Yet, in telling the story of Jesus’ encounter with the scribe who asked what the greatest commandment was, Mark lavishes language on the reader by fully quoting the Sh’ma, the commandment to love God and neighbor, that Jesus gave as his answer, and then repeating it again from the lips of the scribe.

It is as though for both Jesus and the scribe, just saying the words was a transcendent experience. The scribe praised Jesus, and Jesus responded in kind by telling him that he was “not far from the Kingdom of God.” What may have begun as another official test of Jesus’ orthodoxy ends up as a love feast on the holiest of common ground between two devoted Jews.  The Sh’ma, the prayer they said each day, contains the whole Law, and to say it is an act of worship.

The green window in their hearts flares as this prayer about love aligns them perfectly with the heart, mind, soul and strength of God. To obey this Commandment is to stand in the full bandwidth of God’s will for humanity within creation, receiving the pure signal of God’s grace that is animating the universe and moving it toward its divine destiny.

Our Lenten call to prayer is to capture this same signal by aligning our lives to God and neighbor.  Tuned to this station gives us peace and alerts us to the tasks God wants us to accomplish today, sending us to those neighbors waiting for us to be light and grace for them. To know this and to act on it is to be on the threshold of the Kingdom of God.