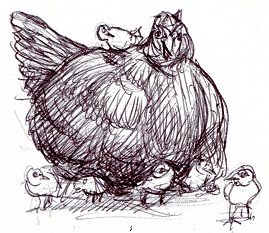 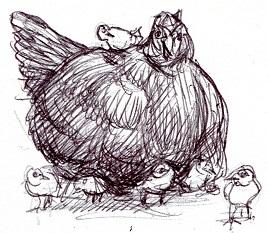 “I yearned to gather your children together as a hen gathers her brood under her wings, but you were unwilling” (Luke 13:34).

When Jesus approached the city of Jerusalem in Luke 19:41, he wept over its failure to avert the coming disaster that would befall the city in 70 CE during the Jewish-Roman War.  Earlier in Luke 13:34, he expressed the same lament with the image of the mother hen gathering her chicks around her to protect them from danger. Alas, the leaders of the city and the temple establishment rejected him and his message of peace.

What can a hen do under attack except to offer herself as prey in order to give her young the chance to scatter and escape.  This is what Jesus does in the Garden of Gethsemane when the soldiers come to arrest him. Betrayed by one of his own, abandoned by the others, Jesus fulfills his mission to die for the people. “Greater love than this on one has, than to lay down his life for his friends” (John 15:13).

Today, as many celebrate Halloween, we mark its origins as All Hallows Eve, the night before All Saints Day. Holy men and women are remembered for their love and service to others. Martyrs among them laid down their lives, imitating Jesus and this greatest of all loves.

Liturgically, the church in November remembers all our beloved dead with prayers and displays of photos and a book of remembrance in many parishes.

Recent public funerals for servants like Representative Elijah Cummings brought our politics to a brief halt as friends and colleagues extolled his commitment to service.

We are moved most of all in the absence of those close to us by the love they showed. We honor them by imitating them. They have completed their mission, stayed the course and kept faith.  What better way for us to renew our life’s purpose than to honor those who have gone before us, giving themselves out of love?