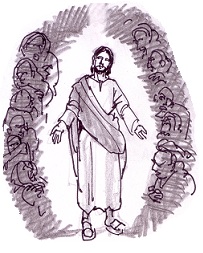 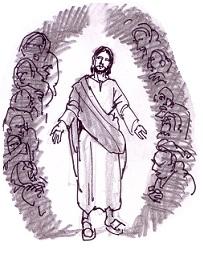 “If today you hear his voice, harden not your hearts” (Psalm 95).

One of the questions posed for readers of the New Testament is why Jesus encountered such hostility from people who should have welcomed his gracious words and loving deeds. The Pharisees were themselves reformers and the scribes knew the Scriptures and the core emphasis on love in the Law. While the Gospel writers understandably took a one-sided, even polemical view of Jesus’ enemies, it is still difficult to fathom how closed-minded and hard-hearted these religious leaders seem to have been as Jesus went about his life-giving ministry.

Today’s Gospel about the healing of a leper is an example.  We imagine how traumatized such victims must have been in a society that mixed moral judgment with isolation, blaming lepers for their own disfigurement, ostracizing them from their families and communities.  The leper wonders if even Jesus will show him any compassion as an untouchable and a sinner.

Their encounter is filled with pathos and, we sense, anger in Jesus as he heals and sends the man to show “proof” to the priests, who will regard Jesus as contaminated and a lawbreaker for touching the leper, despite the astonishing healing.  When Jesus drove out evil spirits, they said it was because he was in league with Satan, an absurd claim and willfully blind to God’s obvious presence in Jesus.

Mark emphasizes that the conflict with the authorities begins as Jesus exposes a baleful evil spirit already present but undetected in the synagogues when he casts out its agents from the demoniacs.  They depart protesting but acknowledge Jesus’ power.  Inquisitors arrive from Jerusalem and witness Jesus’ authority over Satan, but they refuse to acknowledge the grace evident in him, a hill country preacher to their status as experts of the Law.  They plot against him, try repeatedly to trap him, undermine his teaching and question everything he says and does.

Hardness of heart suggests an extreme inability to get past preconceived ideas or to suspend judgment in the face of new information. A closed mind defends positions so deeply invested in that to admit doubt is to totally lose face. When this occurs collectively, group loyalty makes compromise near impossible. The enemies of Jesus reached this hardened position to the point that he had to die to preserve the nation.  When Jesus arrived in Jerusalem, he wept over its failure to know the hour of God’s visitation and to avert the coming disaster that destroyed the nation.  He embraces death on the cross to break the hold of evil and to plant the seeds of hope for a new future God would lift up because of his unwavering trust in divine justice and the power of love over death.

The Gospel would be a tragedy to surpass every Greek and Shakespearean tragedy if Jesus had not risen from the dead. This is the sign and promise we now cling to in the face of every crisis.