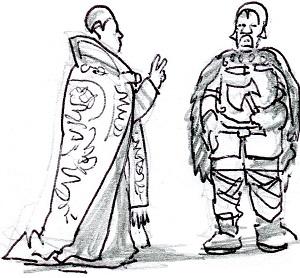 Today is the feast of St. Leo the Great, the 5th Century pope known for his efforts to bring peace at a time when the Roman empire was breaking apart. In one account, Pope Leo met Attila the Hun at the gates of Rome and persuaded him not to sack the city.

History is the narrative of both needed stability and inevitable change. This past week’s dramatic elections were one example of this process.  We will know only in hindsight whether today’s world can survive conflict through dialogue. The peaceful transfer of power by voting is one sign that civilized community is possible.

Many saints and heroes like St. Leo have stood in the breach to urge nonviolent transition rather than open conflict as the best way to advance history. Gandhi and Nelson Mandela also come to mind.

Jesus announced the coming of the Kingdom of God in one of history's darkest hours, when conquest and oppression defined the world. He proclaimed the mystery that God's revolution begins in the heart, inspiring lives that demonstrate the power of love and truth to transform society. His witness to God's promises through the prophets to stand with the poor led to his own death. The resurrection of Jesus affirmed the ultimate victory of life over death, hope over fear, justice over force.

We approach the season of Advent at a time when many wonder if real change is possible or whether hope can survive a time of fear and retreat into self-interest and exclusion. The Kingdom of God began with the arrival of a child, naked and vulnerable to a cold and forbidding world.

Our own path forward begins here, trusting the message of Jesus, so well expressed by Gandhi in one of his own challenging hours: "When I despair, I remember that in all of history the way of truth and love always wins."