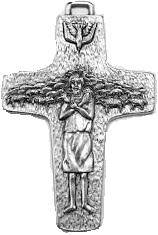 "It is not the will of your heavenly Father that one of these little ones be lost” (Matt 18:14).

In the Christmas story from Matthew's Gospel, it is no small detail that the first visitors to the Christ child were shepherds. These simple hill country people who followed and protected the flocks of sheep and goats were attuned to the night skies and the presence of angels. When told of the birth of Jesus, they came without hesitation, no doubt bringing their entire flocks with them.

Jesus would later describe God as a shepherd who never gives up on a lost sheep but goes in search of it until he brings it back to safety. This image is the essence of the Good News the lowly shepherds heard that first night. God was coming into the world for them, and for all the poor and those without power and status. This was the heart of Pope Francis' year of mercy and his letter "The Joy of the Gospel." The image with this short reflection is of the simple yet profound cross the pope wears.