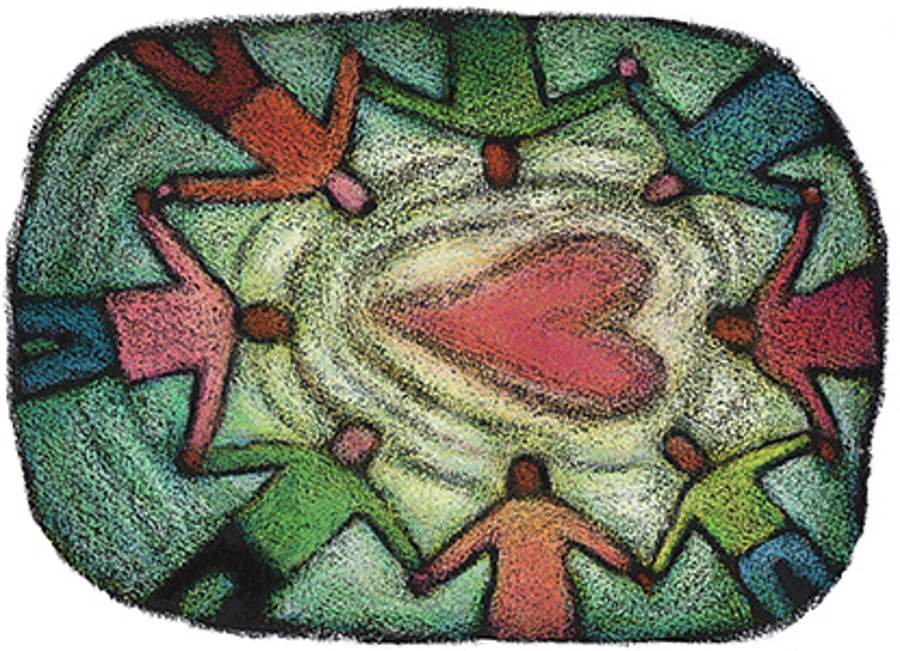 The appearances of Jesus following his resurrection reveal how the risen Christ restores relationships by reconnecting with those who followed him. This is the work of reconciliation that begins with the forgiveness of sins.

In these Easter encounters, whether in the upper room or on the road to Emmaus, in the garden or on the beach, Jesus makes connections about everything in the scriptures, "beginning with Moses and all the prophets" who referred to him (Luke 24:44). As he told them before he died, he reminds them again now that he is raised from the dead, that "the Christ is to suffer death and rise from the dead on the third day" and that "in his name repentance for the forgiveness of sins is to be preached to all the nations, beginning in Jerusalem" (Luke 24:46-47). The purpose of his pardon is not simply to erase the slate of sin but to engage his disciples in becoming a new creation.

The power of this forgiveness to forge a new relationship in the risen Christ is captured by Alice Walker in her poem "Goodnight, Willie Lee, I'll See You in the Morning."

Reflecting on the farewell her mother spoke "without tears … but with civility" at her father's funeral, and aware of all he had put her mother through during their many years of marriage, Walker writes, "It was then I knew the healing of all wounds is forgiveness that permits a promise of our return at the end."

It is God's forgiveness shown to us in the suffering, death and resurrection of Jesus that paves the way for our return to God. As St. Paul reminds us, "We know that our old self was crucified with him, so that our sinful body might be done away with, that we might no longer be in slavery to sin. … If we have died with Christ, we believe that we shall also live with him. We know that Christ, raised from the dead, dies no more; death no longer has power over him" (Rom 6:6-9).

The Easter season celebrates Christ's victory over the grave by choosing reconciliation over revenge. By daring to forgive those who put him to death, by choosing to die rather than seek vengeance on those who tortured and executed him, Jesus shows us how our God is a God of life and how the fullness of life is found in forgiveness.

This journey of life that leads to becoming a new creation begins by tracing our story of salvation in the nine readings proclaimed at the Easter Vigil. In the Book of Genesis, we hear how God looked upon the earth when it "was a formless wasteland and darkness covered the abyss" and boldly proclaimed, "Let there be light" (Gen 1:3). The creative nature of God is reflected in the air we breathe, the water we drink, the food we eat, the beauty that surrounds us in trees and tulips, in rocks and rivers, flowers and fields, snow-capped mountains and green-clad fields, and in all creatures.

God saw how good it all was, but the crowning touch of God's creative power is found in the creation of human beings in the divine image: "In the image of God he created us, male and female God created us" (Gen 1:27). This is at the heart of the process of forgiveness and the challenge of becoming a new creation. When we forget who we are, when we forget that we are made in God's image and likeness, we are less likely to forgive. When we forget that the one who has hurt us, or who holds something against us, is also made in God's image and likeness, we will fail to forgive.

But when we remember who we are and whose image we bear, and that we carry within us the very breath of God, we will gather the courage and dare to forgive.

We feel this breath of God when Jesus appears to his followers, hiding out and huddled in fear in the upper room (John 20:19-29). Remember that the doors were locked because of their fear of the authorities. When Jesus appears, he does two things that reflect the sacred connection between resurrection and reconciliation: He breathes on them, and he shows them his scars. "Peace be with you," he says. The wounds of the crucifixion are visible on the body of Christ. His hands and feet bear the marks where the nails punctured the flesh; the terrible wound on his side shows where the soldier pushed the spear to see if Jesus was dead.

What do these wounds on the resurrected body of Christ say to us? In a world and a church where covering the scars of our sins and hiding the wounds has caused untold suffering, the image of the risen but scarred Christ shouts that reconciliation is impossible until truth is told. This is not an easy image. Most institutions and individuals prefer the approach of Rhett Butler to that of the risen Lord. In the famous scene at the end of Gone with the Wind, when Rhett explains to Scarlett why their relationship is over, he says, "I was never one to patiently pick up broken fragments and glue them together again and tell myself that the mended whole was good as new. What is broken is broken — and I'd rather remember it as it was at its best than mend it and see the broken places as long as I lived."

Fortunately, the resurrected Jesus does not think along the same lines as Rhett Butler. In his appearances to his disciples, who are still trying to put their broken hearts back together, Jesus doesn't present himself as "good as new." Though his grace is infinitely powerful, he does not use it to mend their broken dreams and fragmented faith.

Instead, Jesus' resurrected body bears the wounds of his crucifixion. Jesus seems to be telling his frightened followers who are still trying to make sense out of his death— even as they encounter this ghost-like figure before them — that the resurrection is not about putting the pieces of our shattered lives, our broken relationships and our wounded world back together to make our former lives "good as new." Rather, Easter is about picking up those broken pieces and holding them up to the light of the risen Christ in order to see how we might become a new creation.

Through the open wound in the side of Christ, God opens the door for all to experience divine mercy and compassion. The signs of water and blood flowing from his side (John 19:34) reveal how baptism and Eucharist are the primary sacraments of reconciliation that make peace.

Peace comes through the wounded body of Christ. Being in touch with our scars humbles us, makes us more open, more understanding and less self-serving. Thomas Reynolds, in his book Vulnerable Communion, writes: "In presenting his impaired hands and feet to his disciples … the resurrected savior calls for his frightened companions to recognize in the marks of impairment their own connection with God, their own salvation."

During the last decade, our belief in the church as the wounded, scarred body of Christ has deepened. When people of faith embrace the grace of being a humble church that lives with our doubts and is willing to confront our fears as we keep our eyes focused on the presence of the scarred and risen Christ among us, we become a safe place for healing and hope.

Barbara Kingsolver noted in her book Animal Dreams: "The very least you can do in your life is to figure out what you hope for. And the most you can do is to live inside that hope." Our Easter hope is founded on the forgiveness of sins and our willingness as a forgiven and redeemed people to be ministers of reconciliation in our wounded world.

In his book The Art of Forgiveness, Lovingkindness, and Peace, Buddhist teacher Jack Kornfield relates a story about a ritual practiced by the Babemba tribe of South Africa that reveals the kind of reconciliation that leads to a new creation by taking us back to our first creation. When a person "acts irresponsibly or unjustly, he is placed in the center of the village alone and unfettered. All work ceases, and every man, woman and child in the village gathers in a large circle around the accused individual. Then each person in the tribe speaks to the accused, one at a time, each recalling the good things the person in the center of the circle has done in his lifetime. Every incident, every experience that can be recalled with any detail and accuracy is recounted. All his positive attributes, good deeds, strengths, and kindnesses are recited carefully and at length."

The ritual is just the opposite of the old "chapter of faults" practiced in many religious communities, or the catalogue of catastrophic failures many of us recite when celebrating the sacrament of reconciliation. The purpose of this ritual of reconciliation is to remember who we truly are at our core: children of a living and loving God.

During the Easter season, we are once again given a chance to remember who we are and to act out of our best selves. When we do this, we express our identity as people of life, not of death.

When Jesus shows his disciples the scars of his crucifixion, he is not only saying to them, "See, it really is me," he is also reminding them that he was a victim of torture who has triumphed over evil and set us on the path to a new creation. We live inside the hope that true peace can only come through the scars on the resurrected body of Christ. Easter envisions how we, with our blemishes, bruises, scars and wounds, can become that new person the risen Christ creates in us. We do this by making forgiveness not the exception, but the rule; not a special import from the divine, but a daily export from our very human lives.

Whenever people of faith celebrate Eucharist, they are engaging in the primary sacrament of reconciliation. In communion we confirm our desire to be ambassadors of reconciliation by being a new creation.

Editor's note: This reflection was originally published in the April 2012 issue of Celebration. Sign up to receive daily Easter reflections.