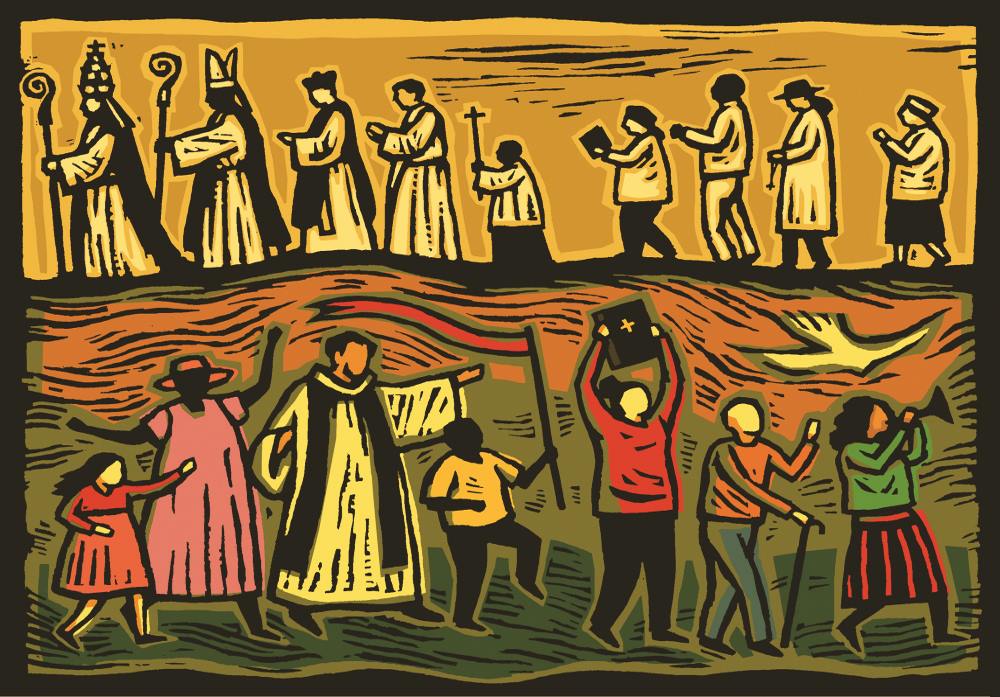 For the three years preceding the Second Vatican Council, and all during that council, Roman Catholics added to the prayers after Mass (does anyone remember those?) Pope John XXIII's "Prayer to the Holy Spirit" for the council's success. Day after day the church prayed, "O Holy Spirit, renew Thy wonders in this our day, as by a new Pentecost." Pope John dreamed that through the council the Holy Spirit's gifts would flow abundantly upon the whole church for the benefit of the entire world, because the Spirit alone has the capacity to change hearts from within, not by external force but by interior persuasion.

Today, however, the church is divided over just how much of a Pentecost Vatican II actually turned out to be. It is likewise divided over what kind of church we are. This article will explore some of the consequences of this ambiguity.

Now, 45 years after Vatican II (1962-1965), this Easter season has reached its climax. We transition from celebrating the new life of Christ's resurrection to celebrating the new life poured out upon the world by the Holy Spirit. Pentecost is the church's movement from mystagogy to vocation, from contemplation to mission. The first Pentecost ushered in the age of the church in which the Holy Spirit turned Christ's disciples into missionaries. The Spirit is the church's living memory, anointing believers in faith to allow them to live the events of their salvation in the present. As the Catechism of the Catholic Church explains: "The paschal mystery of Christ is celebrated, not repeated. The celebrations … are repeated, and in each celebration there is an outpouring of the Holy Spirit that makes the unique mystery present [to us]" (#1104). Consequently, every one of the faithful becomes a dynamic source for the Spirit' s contact with and action upon the world.

This is an essentially apostolic vision of the church. We find its origin in the Acts of the Apostles, where the gift of the Spirit immediately led people to bear witness: "All of them were filled with the Holy Spirit and began to speak in other languages, as the Spirit gave them ability" (Acts 2:4); "They were all filled with the Holy Spirit and spoke the word of God with boldness" (Acts 4:31).

Reflecting on the unmistakable energy of the Spirit revealed in these passages, Pope Paul VI asked, "In our day, what has happened to that hidden energy of the good news, which is able to have a powerful effect on [our] conscience?" (Evangelii Nuntiandi 4). The answer, in part, is that our church's leadership has shifted its focus from mission to maintenance, from evangelization to ritual sanctification. The active players are no longer (or not often) imagined to be the baptized, but the ordained.

The return of clericalism

A type of clericalism has been revived over the last 20 or 25 years that is subduing the apostolic vision of the church sketched by Vatican II. It is overemphasizing the part played by the ordained in the life of the church. There are many symptoms, from cardinals unpacking their 15-foot trains of scarlet silk — their cappa magnas (ceremonial capes) — to seminarians and young priests living full-time in cassocks; from the disappearance of inclusive language in church texts and preaching to the nearly exclusive focus upon clerical vocations in diocesan letters. Seminarians are in short supply, and officials fear that the generalized secularization of the culture and particularly the promotion of laypersons to ministries of service in the church will have the effect of discouraging vocations to the ordained priesthood. The consequent demotion of the spiritual dignity of the faithful and a chilling of social relations between clergy and people are all too clear among some church leaders. These details are debatable; they vary from place to place. Far more significant is the underlying vision and practice of what goes on in the local church.

I am trying to describe here an implicit popular theology of the church that appears to be widespread. These ideas represent not only people's general understanding of what the church is about, but also much in pulpit preaching and in church documents as well. Here is a brief description of the problem:

(a) In this popular theology, the priest represents Christ, while the people represent those to whom Christ ministered. During this "Year for Priests," we have heard lots about how important the figure of the priest is. However, I have yet to hear anyone echo the clear teaching of St. Paul that each of the baptized is an alter Christus — another Christ — and has a vocation to share the church's mission through an apostolic life in the ordinary world.
(b) In this popular theology, the ordained presbyter (priest) is understood to be the one who is active in the Eucharist as the agent of reenacting Holy Thursday and Good Friday, while the people are sacramentally passive as recipients of the priest's sacred action. Some of those who buy into this vision of the Eucharist are hungry to hear Gregorian chant, Renaissance polyphony and Latin texts while they are edified by the priest's awesome rites. This reduction of the laity to passive bystanders instead of active participants in Catholic worship is the most characteristic manifestation of clericalism.
(c) One additional aspect of this implicit popular theology has to do with the Holy Spirit. It imagines that if the Spirit is bestowed on the faithful, it will come exclusively through the ministry of the ordained. It presupposes that the faithful are directly dependent upon bishops and priests for their sanctification. This ignores the rich teaching of Romans and 1 Corinthians that baptism gives the faithful the power to live and act under the impulse of the Holy Spirit and to be powerful witnesses to God's action in the world.

Vocation of the faithful

Speaking through the council fathers, the Spirit at Vatican II left no doubt that all three of these theological manifestations of clericalism are wrong. In the "Decree on the Ministry and Life of Priests," we read: "Jesus gave his whole mystical body a share in the anointing of the Spirit with which he was anointed. In that body all the faithful are made a holy and kingly priesthood, they offer spiritual sacrifices to God through Jesus Christ ... therefore there is no such thing as a member who does not have a share in the mission of the whole body" (Presbyterorum Ordinis 2). Put another way, each of the faithful, positioned in some way at the church's periphery, has the potential to initiate a more dynamic expression of the living church, calibrated precisely to the real existing possibilities for life that are always emerging there.

To the idea that the priest celebrates the Eucharist and that the faithful are nourished from afar, the council insisted on the contrary: "The eucharistic celebration is the center of the assembly of the faithful over which the priest presides. Hence priests [must] teach the faithful to offer the divine victim to God the Father in the sacrifice of the Mass and with the victim to make an offering of their own lives" (Presbyterorum Ordinis 5). By offering themselves and their apostolic action in the world, the faithful bring the fruit of their baptismal priesthood (which is essentially nonliturgical and lived out in the world) to the church's fundamental act of sacrifice and self-offering to God at Mass. When this role of the faithful is denied, then Sunday Mass becomes the place where people assemble not as a priestly people offering their lives to God, but as individuals praying private devotions as they watch the priest offer sacred rites on a distant altar.

To the idea that the faithful are sanctified uniquely through the ministries of the ordained, the "Constitution on the Church" clearly says: "The baptized, by regeneration and the anointing of the Holy Spirit, are consecrated a spiritual house and a holy priesthood, that through all their Christian activities they may offer spiritual sacrifices and proclaim the marvels of him who has called them out of darkness into his wonderful light" (Lumen Gentium 10). In other words, the vocation that the church offers to the faithful is not a secondary role as clients of clerical ministries, but a Spirit-filled participation as pioneers in the church's role as herald of the kingdom of God.

The three examples of clericalism just given are never articulated in exactly these terms. However, before offering this essay for publication, I checked out these ideas with a number of people to see if they ring true to their experience. All of them assured me that this is what they see in the new clericalism, expressed not in so many words, but in actions and attitudes. The fundamental problem with clerical condescension is that it appeals to and reinforces a passive clericalism on the part of the laity who are used to being put down and quite unused to being reminded of or commissioned for an apostolic role.

The laity is supposed to be the link between the church and the world. Pope Paul VI describes laypeople as those whose vocation places them in the midst of the world, in charge of the most varied temporal tasks. He goes on to say: "Their primary and immediate task is ... to put to use every Christian and evangelical possibility latent but already present and active in the affairs of the world. Their own field of evangelizing activity is the vast and complicated world of politics, society and economics, but also the world of culture, of the sciences and the arts, of international life, of the mass media" (Evangelii Nuntiandi 70). A church that forgets this and fails to commission the laity to this irreplaceable dynamic role in the culture has let go of the great commission that Christ left to the church as his last mandate: "Go into all the world and proclaim the good news to the whole creation" (Mark16:15; Matt 28:19). It is a church that has forgotten that it is baptizing and confirming missionaries "to make the church present and fruitful in those places in circumstances where it is only through them that it can become the salt of the earth" (Lumen Gentium 33).

Finally, we should also note that there has never been a moment in which the irreplaceable role of the ordained minister has been more important. We need a ministerial priesthood at the service of the common priesthood of the baptized (Catechism of the Catholic Church 1547), we need presbyters who can teach the faithful to offer their own lives along with the divine victim in the sacrifice of the Mass (Presbyterorum Ordinis 5), we need ministers of the Gospel who recognize that "the distinct character of [their] activities is the aim to proclaim the Gospel of God" (Evangelii Nuntiandi 68) in ways to draw people effectively to the heart of Christ. But this ordained ministry cannot be the condescension of a patriarchal master, but only the loving service of an apostolic brother. The very nature of the church demands it. The parish is not about giving passive Christians spiritual comfort; it is rather the recruiting center for an apostolic priestly people. The Spirit is waiting. The people are waiting. What are you waiting for?

Editor's note: This reflection was originally published in the June 2010 issue of Celebration. Sign up to receive daily Easter reflections.