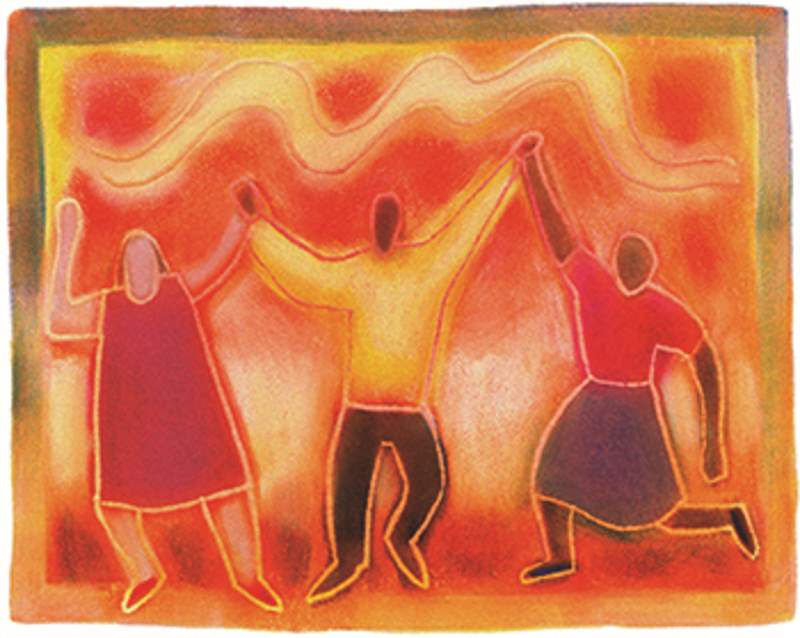 The LORD begot me, the first-born of his ways, the forerunner of his prodigies of long ago; from of old I was poured forth, at the first, before the earth. … Then was I beside him as his craftsman, and I was his delight day by day, playing before him all the while, playing on the surface of his earth; and I found delight in the children of humanity. (Proverbs 8)

Man is most nearly himself when he achieves the seriousness of a child at play. (Heraclitus)

For the Logos on high plays

stirring the whole cosmos back and forth, as he wills,

into shapes of every  kind. (Gregory of Nazianzus)

Ancient literature indicates a comfort with the delights of play and the power of play in ways that our contemporary society, with its focus on tasks, productivity and material measures of value, seems to have entirely lost. When I recall with friends the imaginative and purposeless games of our youth from even 40 years ago, they seem light years removed from the serious competition of today's youth in sports teams, videogames and resume-building after-school programs.

The picture for adults is, if possible, even more serious. In the corporations for whom I do formation, work-life balance is the problem employees repeatedly find most intractable. Their attitude toward both work and life is frequently missing any reference to delight or to playfulness. Even the rate at which people consume alcohol as an aid to relaxation indicates a general discomfort with being at play. But play offers essential benefits that are deeply connected to our Christian tradition and our call to spiritual maturity.

Discussions of the role of play in human lives and culture go back at least as far as Plato. It was Plato's observation about the irrepressible leaping of children that psychologist Erik Erikson referenced in his description of play. Here, Erikson highlights three basic facets of play:1 Children leap for sheer delight; leaping involves testing and negotiating boundaries; and leaping involves falling.

The delighted leap of a child is characterized by freedom. The Holy Spirit, a free agent who accomplishes the impossible for the sake of freeing all humankind, likewise invites us to make leaps in our lives that lead to freedom. The child's leap is free, first, because it is never compulsory; the action is generated deep within the joyful impulse of the child. Second, the leap is clearly free from any "product." The leap of the child does not produce a material benefit; it may be the perfect act of pure "being." Third, the playful leap is more closely related to kairos — a moment of indeterminate time in which something special happens — than to chronos, sequential time. Play frees us from a certain bondage to time.

"It's just fun … there are no rules … there's the grass and the sun and the water and the laughing and screeching," she said. "It all just fills you up."

"The water, all of it, like the way the music fills me up when I dance."

She replied, "There is no time, you're just in it."

Full attention, presence in the moment, is a spiritual gift of being freed from time, and is arguably the single most fundamental quality of the spiritual life. We look for ways to cultivate the ability to be fully present in order to be more aware of the presence of God in and among us. Genuine play achieves that quality quite naturally.

The second aspect of leaping that Erikson describes is testing and negotiating boundaries. A child thinks, "Maybe if I jump high enough I can really fly," even when the serious world is saying, "Don't be silly; you can't fly."

Early in the film "Toy Story," Woody, the faithful, serious leader of the toys, bets newcomer Buzz Lightyear that Buzz can't fly. Buzz confidently produces a complicated series of leaps and falls that sends him soaring across the playroom. Woody is not impressed. "That's not flying, it's falling, with style." Buzz is triumphant and undeterred: "Flying!" The other toys cheer wildly.

Woody represents the real limits of existence; gravity does restrict us, but not completely. Buzz represents confidence in possibilities we may not have imagined. Our whole lives are lived in the interplay between limits and possibilities. We know the dangers of taking either position to its extreme. We know what can happen when people become solely focused on their limitations, and we know what it looks like when someone has no idea of his or her limits. Playing can help us to see both, and especially, I think, to keep us aware that there are possibilities we might not see.

In play, the exchange between limits and possibility stimulates imagination and creativity. Think about the creation story. All that existed was possibility, "a formless void." First, light is created; there is still endless possibility until it is distinguished from the darkness. Then there ensues a series of limiting acts out of which come sky, sea, dry land, sun, moon, stars, creatures, plants, man and woman — all come into existence by being distinguished from something else, separate. Out of chaos come both order and infinite diversity.

Playing gives us another aspect of freedom, freedom from the tyranny of the status quo. We can suspend the actual world for a bit and live "as if." Make believe — pretending — would appear to be the most childish of child's play, but theologians suggest that the capacity to imagine possible worlds, which is key to the art of pretending, is exactly what we need to live into the reign of God. Could Peter walk on the water? Is that any more impossible than the vision of God's reign toward which all of Jesus' ministry points? In his embodied proclamation of God's reign, Jesus had a habit of testing and breaking and redrawing the boundaries and rules that governed the lives of the people of Judea. And his death and resurrection proclaimed that even the laws of nature don't have the last word on what is possible. We have cast our lot with the playful Spirit of the divine, who says, "Walk with me, through self-emptying and even death."

We live in the "between" time. God's reign has been manifested clearly in Jesus, and we are also still moving toward its fullness. In that between time we are invited to live "as if": preaching good news to the poor, freeing the oppressed, healing the sick, proclaiming the year of the Lord's favor, so that our actions may become signs of God's reign and hasten its full realization. We live always knowing the limitations of human frailty and sin operating in us and in our communities, but we also live in the realization of the full presence of God among us now.

Then Peter remembered what Jesus had said: "Before the cock crows, you will deny me three times." And he went out and wept bitterly. (Matt 26:75)

The third facet of a child's leap is falling. We launch ourselves upward in possibility, and we return to the earth. From the perspective of the leap, falling and failing are integral to play. In this way, play gives us the gift of yet another aspect of freedom: freedom from the need to be self-sufficient and perfect. The heart of our Christian tradition is the rhythm of falling and reconciling. On the holiest night of our liturgical year, we sing, "Oh happy fault, oh necessary sin of Adam …" We sing the Exsultet with gusto, but we struggle to live into the message that the experience of falling is important. When we fall, we meet the ground and so discover and humbly consent to the fact that we are limited. In falling, we know without a doubt that we need God and that we are not so different from one another.

The reconciliation that can follow our humble consent to limits enables us to grow in relationship to God and to collaborate well with others in our lives and ministries. If we don't learn our limits, we can't really see the gifts that we have to bring, and we will be unable to trust well. Psychiatrist George Vaillant writes: "It is hard to separate the capacity to trust from the capacity to play, for play is dangerous until we can trust both ourselves and our opponents. … In play, we must trust enough and love enough to risk losing without despair, to bear winning without guilt, and to laugh at error without mockery."2

If we can find ways to play in addition to our work, and find the playful in our work, we will allow ourselves to be more open to the movement of the Spirit in and among us. The fruit of play in light of the Paschal Mystery is the freedom of the Spirit — freedom that cultivates vision, creativity, collaboration; freedom that makes possible more than we can imagine.

Editor's note: This reflection was originally published in the November 2011 issue of Celebration. Sign up to receive daily Easter reflections.