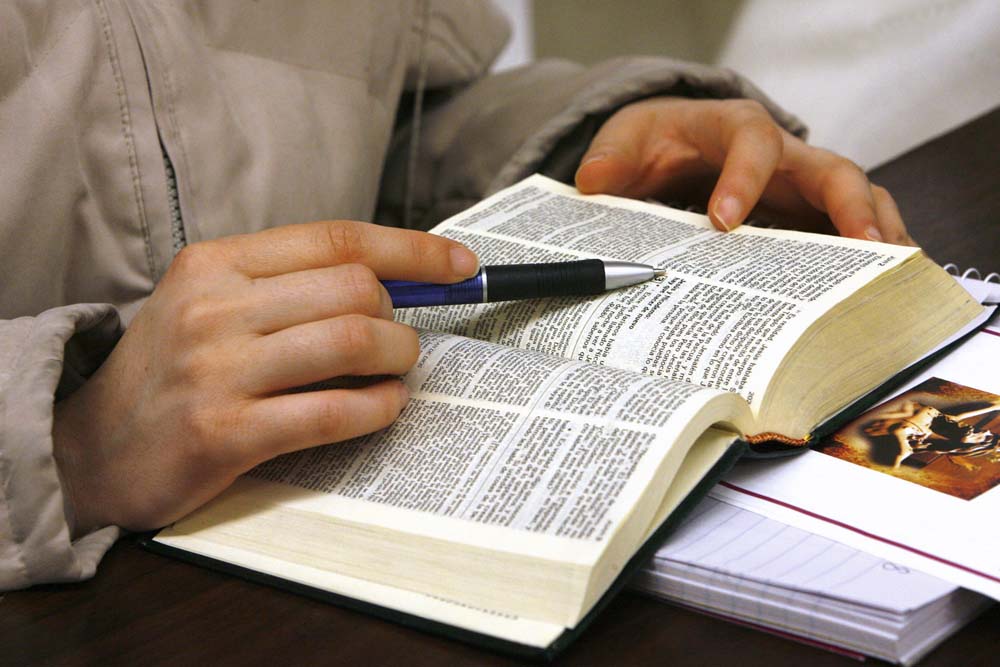 A young woman studies the Bible at St. Mary of Celle Parish in Berwyn, Ill., in a 2009 file photo. (CNS/Karen Callaway, Catolico)

For reasons that my psychiatrist, if I had one, would have to explain, I tend to be intrigued by the anniversaries of historical events.

Which is why I noticed recently that the American Bible Society was created May 8, 1816, which is exactly 202 years before the date on which this column about Bible reading was posted online.

The history of the American Bible Society, or ABS, reveals its Protestant roots and how, at times, that produced an anti-Catholic bias.

"When Irish and German Catholics began pouring into the country in the early 19th century," says John Fea, author of a book on ABS history, "the ABS solidified its position as a distinctly Protestant benevolent society. Relations with Catholics would improve in the 20th century, but in the years before the Civil War it embraced the largely anti-Catholic spirit of the age."

In turn, I've long been aware that until fairly recently, Catholics didn't get much encouragement to read the Bible either on their own or in groups. Many Catholic friends tell me that was discouraged. Beyond that, many say they grew up feeling that only priests could provide authoritative interpretations of the passages of Scripture read at Mass, and that individuals who read the Bible alone might easily go astray.

So if Catholics had a family Bible, it mostly sat on a shelf, though it sometimes became the repository of family tree information.

No doubt there were and are exceptions to that broad conclusion about Catholics' non-engagement with the Bible, but I've heard it so often from so many Catholics that I don't doubt it reflects some reality.

By contrast, we Protestants, perhaps encouraged at times by the work of the ABS, sometimes get so focused on the importance of the Bible that it almost becomes an idol. After all, it's out of the Protestant world that we get the idolatrous idea that the Bible is completely inerrant in all of its accounts, whether the subject is science, historical or theology.

That position, of course, is a house of cards, and its inevitable collapse can cause a major crisis of faith to the person who sees those cards tumble into chaos.

The Protestant Reformation raised the visibility of the Bible, particularly as its leaders began to translate it from Hebrew and Greek — and from the later Latin version — into local languages accessible to people in the pews.

Many of us Protestants today have lots of opportunities to engage in personal or group Bible studies, and I think that reality enriches our faith in countless ways — as long as we remember that the Bible often employs metaphor, myth, allegory and poetry. As I may have said here before, sometimes in my congregation we say that you can take the Bible literally or you can take it seriously — but you can't do both.

I personally have three group opportunities each week to delve into some part of the Bible to try to grasp what it might have to say to us 21st-century Americans. And I am endlessly surprised to discover something new in a text I thought I knew.

Sometimes what I learn is simply intriguing and has almost nothing to do with faith. Recently, for instance, a group Bible study I help to lead found that in the fourth chapter of the book of Amos some translations say "cows" while others say "kine." What's kine mean? It's an archaic term for the plural of cows. So now I drop it into conversations just to show off.

If in some sense the church universal understands the Bible as the word of God, as it does, then it strikes me as vital for the people in the pews to be biblically literate. And literacy in this case means more than grasping meaning. It also means understanding what it almost certainly can't mean, despite arguments from people who are certain about the meaning of every word.