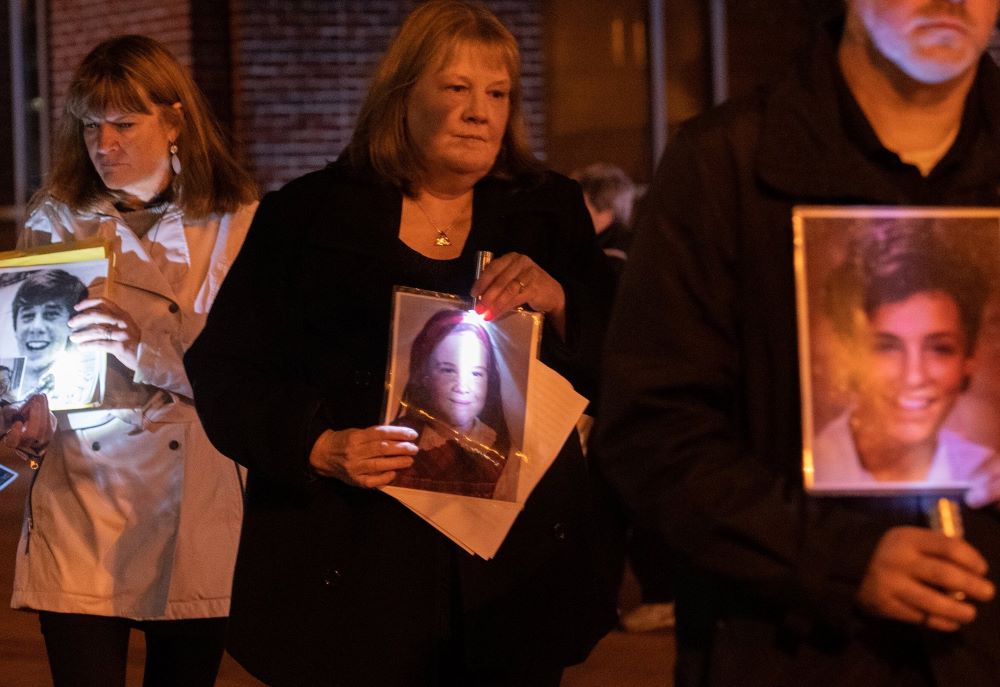 Supporters of SNAP, Survivors Network of those Abused by Priests, walk in memory of alleged abuse victims outside the 2018 assembly of the U.S. bishops in Baltimore. (CNS/Catholic Review/Kevin J. Parks)

A research team from Xavier University in Cincinnati has created a tool that measures the "moral injury" caused by clergy sexual abuse and its concealment by officials in the Catholic Church.

In a report on the pilot study, released Dec. 12, moral injury is described as persistent psychological and emotional distress, spiritual anguish, moral confusion, social isolation, and distrust for institutions. It results from a betrayal of trust or violation of deeply held moral values.

"When the perpetrator of sexual abuse is a priest — someone ordained in persona Christi — and represents the holy, the sacred or the entire church or even God, the trauma of abuse takes on an added weight," said Marcus Mescher, a principal investigator for the study and professor of Christian ethics at Jesuit-run Xavier. "I thought the concept of moral injury would be a helpful hermeneutical lens for understanding the many ripple effects of harm caused by clergy sexual abuse."

Moral injury is a concept primarily applied to veterans traumatized by combat, though recently it's been explored in high-stress professions such as law enforcement, health care, child protective services and education, according to the report.

The Xavier team's instrument is the first to measure moral injury in survivors of clergy sexual abuse and, according to Mescher, is more comprehensive than previous methods used to assess moral injury in civilians.

'One survivor described it like being a dirty rag that no amount of bleach can clean.'
—Marcus Mescher

Mescher, author of The Ethics of Encounter: Christian Neighbor Love as a Practice of Solidarity, initially approached the topic of clergy sexual abuse through the perspective of restorative justice. "But I soon realized you can't work toward healing unless and until you understand the extent of the wounds you're dealing with," he said.

The Xavier team will be refining the tool in the months ahead, and it eventually will be available for clinicians and others. The authors hope the plethora of data from the project will inform psychological, theological, moral, ecclesiological and pastoral responses to clergy sexual abuse.

Funded by a grant from Fordham University's Taking Responsibility initiative, the new tool and 20-page report follow two and a half years of creating the instrument and conducting research.

A survey developed by the team included 59 moral injury items and was distributed to adult survivors of childhood clergy sexual abuse as well as current employees of dioceses and parishes and Catholic college students — the intended control group. There were 389 total participants.

Through a number of correlations in the data, there is "evidence that we developed a valid measure of moral injury in the context of clergy sexual abuse," reads the report.

"It is likely that this crisis has really affected every corner of the church and ways that we are all carrying a piece of the fallout," said Mescher.

In addition to the quantitative data the survey collected, the project included in-depth interviews with 15 survivors of clergy sexual abuse. 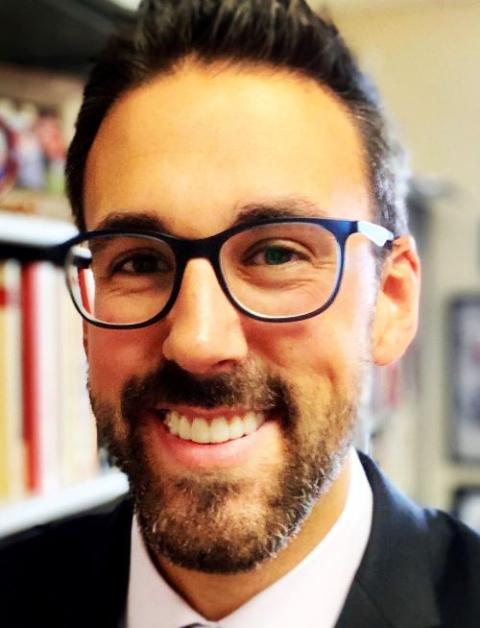 Marcus Mescher, professor of Christian ethics at Xavier University, was a principal investigator for the study on moral injury. "You can't work toward healing unless and until you understand the extent of the wounds you're dealing with," he said. (Courtesy of Marcus Mescher)

According to the report, the new instrument confirmed that moral injury is distinct from post-traumatic stress disorder. Unlike PTSD, which often is expressed through fear and flashbacks, "moral injury has more to do with shame," Mescher said.

Clinical psychiatrist Jonathan Shay in 2003 defined moral injury as a "betrayal of 'what's right' by someone who holds legitimate authority in a 'high-stakes situation.' "

"Shay's emphasis on betrayal points to the harm caused by broken trust: a shaken confidence in one's own goodness, the goodness of others, a reliable moral order, and sense of meaning or purpose," writes Mescher in an essay slated for publication this summer in the Journal of the Society of Christian Ethics.

In his interview with NCR, Mescher gave a classic example of moral injury: "A soldier follows a directive to shell a target, and after the exchange of fire they see there were civilians there, not the enemy they'd intended to hit. So now they are wrestling with, 'How can I look at myself in the mirror and know I'm the murderer of innocent civilians?' "

Mescher said it's important to point out that unlike a soldier who might have killed citizens, a victim did nothing wrong and "were the ones who were violated."

"What we are trying to do is measure the psychological distress, the spiritual distress and the moral dissonance or confusion because of that violation," he said. 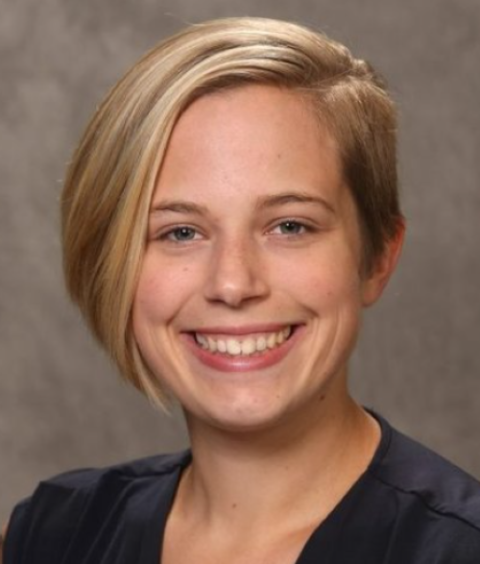 Ashley Theuring, an assistant professor of theology at Xavier University, said a majority of survivors said they'd endured a negative response from church officials, ranging from silence to blame and flat-out rejection. (Courtesy of Ashley Theuring)

Moral injury was measured across several dimensions of the moral life: identity; perception and reasoning; agency; and relationships with others, God and the church.

Among key findings was that clergy sexual abuse generates moral confusion in victims, created when individuals' beliefs about the world — "priests are good" or "the world is safe," for example — are contradicted by their experience of abuse.

The tool found that limited moral agency occurs when survivors cannot make sense of what is happening, and that a negative moral identity begins to develop when a survivor feels limited by their situation or lack of supportive relationships. A person might feel guilt or shame, thinking: "I'm powerless to change this. I must be weak."

For those able to recover, "it is largely about their relationships with other people; they have the support of family, dear friends, or get involved in a survivor network," Mescher said.

As is common for childhood trauma, survivors in the study denied their abuse or lost memory of it for decades and during the intervening years often engaged in tactics to survive or cope. 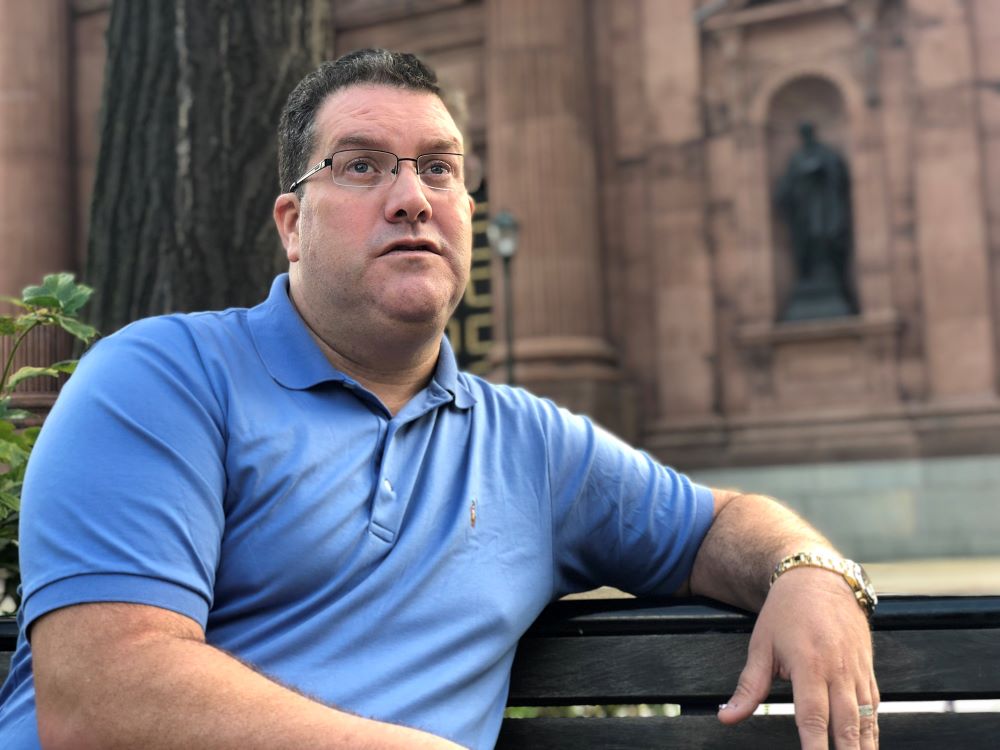 Mike McDonnell, who participated in the Xavier University study on moral injury, told NCR that he suppressed for years abuse by two priests. He is pictured in front of the Cathedral Basilica of Sts. Peter and Paul in Philadelphia in 2018. He is now communications manager for Survivors Network of those Abused by Priests. (CNS/Reuters/Kevin Fogarty)

"I went through my teen years and into my young adult life carrying the weight of what happened to me," said Mike McDonnell, who participated in the study.

McDonnell, now communications manager for Survivors Network of those Abused by Priests, says he was abused by two priests when he was between 11 and 13 years old. Both his alleged abusers were named in the 2005 grand jury report on the Philadelphia Archdiocese.

"I found a ton of ways to suppress what happened," McDonnell told NCR. "The No. 1 easiest way was through alcohol."

He said the repercussions of his trauma led to job losses and the dissolution of two marriages. "Not until I attempted sobriety at age 35 did I start to learn and unveil some of the dark secrets."

The Xavier team primarily studied victims who were far into recovery, and the results would likely look different if "we were able to measure moral injury in people closer to the violation," Mescher said. Still, "this is not something survivors just get over. It's a shattering experience."

"One survivor described it like being a dirty rag that no amount of bleach can clean," he said.

Mescher said one finding that especially surprised him was that there was greater moral injury measured in college students than in those who work for the church. As a moral theologian, he's trying to make sense of it. "Is it a survival or coping mechanism that church employees don't feel the gravity of this in the same way that young people do?" 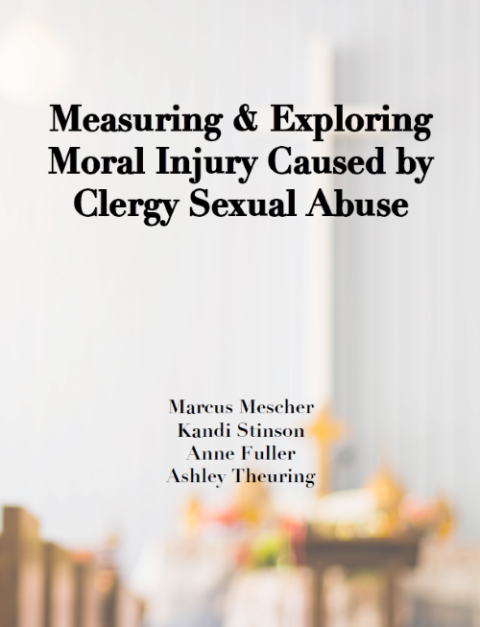 He noted it was difficult to get church employees to participate in the study. "Many said it 'hit too close to home' or they were worried how participating, even anonymously, would be perceived by their pastor," said Mescher.

This difficulty might account for why moral injury was lower among church employees in the data collected, Mescher speculated, for the "ones who did complete the survey felt removed from the subject or didn't feel as implicated as I expected."

A majority of survivors reported negative responses — ranging from silence to blame — when they shared their experience of abuse with church officials.

Ashley Theuring, an assistant professor of theology at Xavier and author of Fragile Resurrection: Practicing Hope after Domestic Violence, interviewed the survivors for the study.

"I've done work with domestic violence and assault survivors, and the grooming and the actual assaults were not surprising for me, though they are traumatic and extremely awful, but what was shocking was the responses these survivors got," she said.

Mescher recounted how when one survivor spoke with a bishop, describing sexual assault that began when she was 6 years old, "the bishop said, 'Well, you must've been pretty developed for a 6-year-old to catch the eye of a priest.'"

"Hearing that was one of those times that it struck me just how much ignorance there is around this," Theuring said. She acknowledged that of 15 survivors, four or five had "very good responses" from the church. "Those were hopeful to hear, but many parts of the transcript allude to essentially this second trauma, this second abuse that happened when they told people in the church."

Mescher, who intends to write a book in the coming year focused on the impact of moral injury on moral conscience, said a lot of lay people still don't understand the extent of the damage caused by the clergy abuse scandal and its active, intentional concealment by church officials.

"There is a system in place that continues to enable and protect perpetrators of abuse and that continues to silence and stigmatize and isolate survivors," he said. "My hope is this project helps dismantle those beliefs and practices, relationships and policies that are keeping us from having a full and accurate picture of the wounds that people are carrying and what it's going to take to heal them."

A version of this story appeared in the Dec 23, 2022 - Jan 5, 2023 print issue under the headline: Study measures moral injury of clergy abuse.