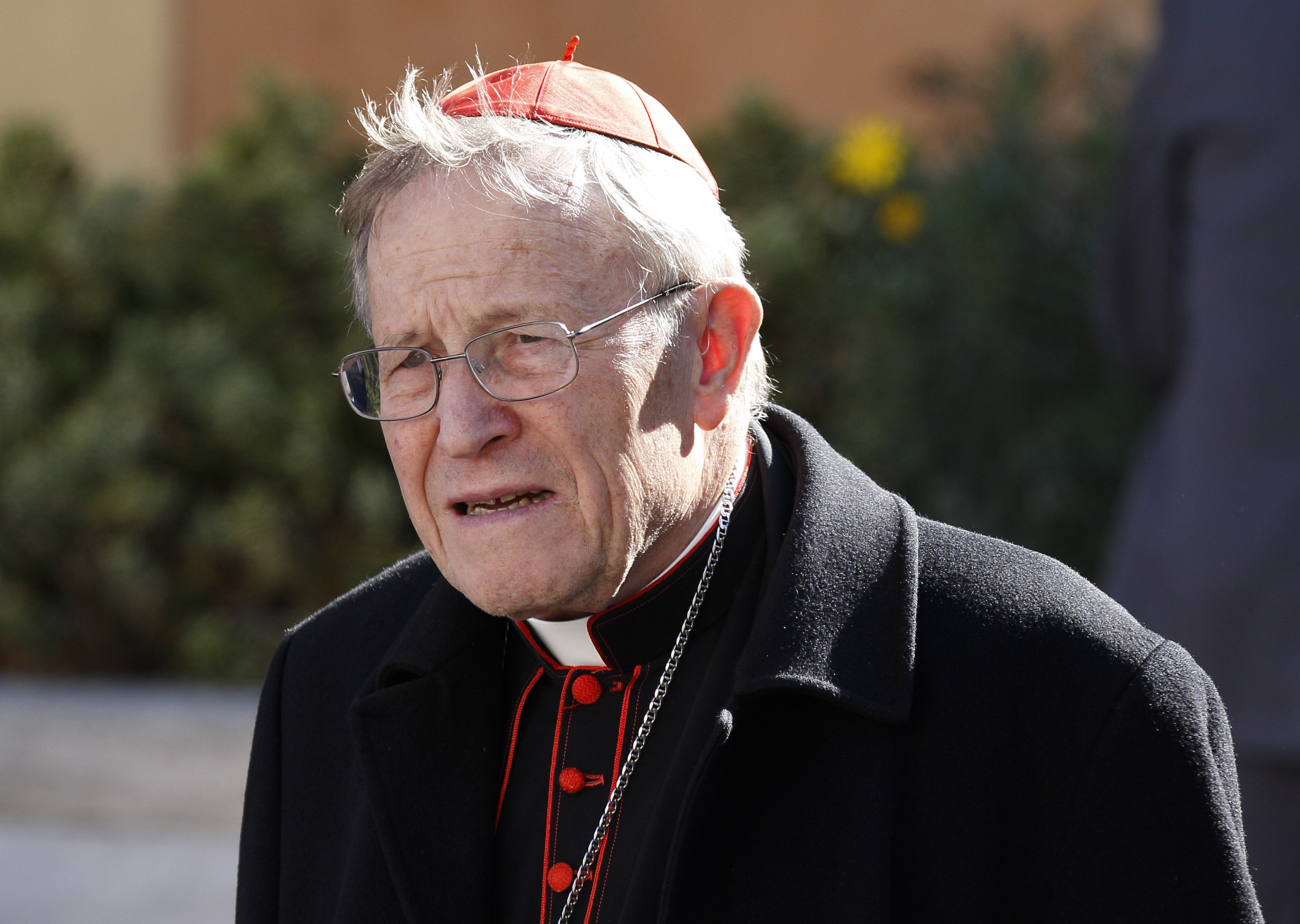 German Cardinal Walter Kasper leaves the morning session of the Synod of Bishops on the family at the Vatican Oct. 24. (CNS/Paul Haring)

The synod had opened the door for divorced and remarried people to be admitted to the sacraments -- in individual cases and under certain conditions -- but it could not go further otherwise the proposal would not have gotten the necessary two-thirds majority, German Cardinal Walter Kasper said.

"The synod opened the door, so to speak, for the admission of divorced and remarried people to the sacraments in individual cases but it did not stride through that door," Kasper said in his address at the 75th birthday of Bishop Heinrich Mussinghoff Oct. 29 in Aachen, Germany. "It states the principle but not the possible consequences. That was the only way to achieve the necessary two-thirds majority on this issue."

Moreover, opening the door for divorced and remarried Catholics was "not the devious idea of a conspiratorial group of Germans," Kasper stressed, "but the unanimous decision of the Central (Synod) Commission which did not want to commit the pope but to leave him a free rein. Neither the conservatives nor the progressive were victorious. The true winner is the pope. His reform course was confirmed by more than a two-thirds majority."

The divorced and remarried problem, which was extensively and often heatedly discussed not only before but also during the synod, had "by no means" been the main question discussed at the synod "but only one of the many questions under discussion," Kasper said. Neither was it a new question but one that had been discussed for decades.

"The synod fathers did not make it easy for themselves but tackled the problem from the ground up," he said. "The discussions were not easy as pretty firmly entrenched positions often clashed. No bishop questioned the church's teaching on the indissolubility of marriage. The question was how to apply this teaching to difficult, complex and often confused situations without infringing upon church teaching itself."

With the end of the synod, the synodal process had arrived at a decisive stage but had not yet reached its goal. The pope's apostolic post-synodal exhortation would be the final, binding conclusion, Kasper said.

"By asking the faithful for their opinion, by its open culture of debate, by highlighting synodality, by emphasizing that the church was not a teacher who criticized, censured and condemned with a wagging finger but who, like a compassionate mother, listened, accompanied and encouraged, the synod had already changed the church," Kasper explained. It was quite clear that the pastoral approach through mercy had won through.

This merciful approach was the right way to understand the new evangelization, Kasper explained and recalled that St. Paul had already decided in favor of faith.

"If today parents in a so-called irregular marriage are permanently refused admission to the sacraments, then, more often than not, their children do not find their way to the sacraments," Kasper said. "Thus we lose the next and possibly the next but one generation. Mercy as a message of forgiveness and reconciliation, on the other hand, can open doors to the faith which had seemed closed."

Mercy was the correct and Christian sound judgement when applying justice, he said.

"It does not see human beings as purely legal cases and if need be lets the guillotine down," but takes the merciful approach which does not reinstate past wrongs but opens up a new chance. "In this way the law does not have a punishing but a medicinal, healing function," Kasper said.