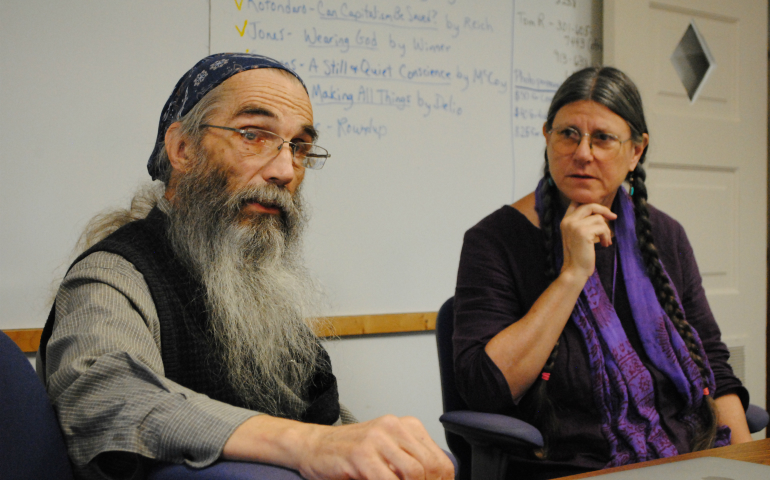 Editor's note: Longtime Catholic peace activist Kathy Kelly helped found Voices in the Wilderness in 1996. The goal of the Chicago-based group was to challenge economic sanctions by aiding the suffering Iraqi people in the wake of the first Gulf War. Voices in the Wilderness endorsed a campaign to circumvent what they called "the immoral sanctions against the people of Iraq." *

In the course of that work, Kelly met Gabe Huck and Theresa Kubasak. The couple would visit Iraq four times between 1999 and 2003, spending Christmases with Chaldean Christians in Iraq's southern port city Basra. In 2004, Huck, then 64, and Kubasak, then 54, moved to Damascus, Syria, to live and learn the language and the culture. They told NCR at the time, "It is so clear that people of the U.S. need to have knowledge of the Arabs, of Islam."

Before making their home in Damascus, Gabe Huck and Theresa Kubasak had regularly visited Baghdad and other Iraqi cities. Through multiple trips and unusual travel experiences, they developed lasting friendships and deepened their cultural awareness.

Iraq was deteriorating under 13 years of U.S./U.N.-imposed economic sanctions. The couple repeatedly challenged the economic sanctions by carrying medicines and medical relief supplies to Iraqi children, families and hospitals. They also helped organize opportunities for scores of other people from the U.S. and U.K. to visit Iraq as part of Voices in the Wilderness.

Voices in the Wilderness delegations notified U.S. authorities that they would break the economic sanctions by personally carrying duffel bags filled with children's vitamins, antibiotics, medical textbooks, surgical kits, first aid material and medical relief supplies, all of which the economic sanctions prohibited. Evidence for prosecution of one delegation included a bottle of water and a blank videotape that had been purchased in Baghdad. Punishment ostensibly imposed to force the Iraqi government's compliance with weapons inspectors had directly contributed toward the deaths of hundreds of thousands of children under age 5.

The Voices in the Wilderness campaign succeeded in sending 70 delegations to Iraq, all of which prompted greatly needed education and public discussion in cities and towns across the U.S. and the U.K.

Leslie Stahl posed the question to Madeleine Albright, then U.S. secretary of state, in a "60 Minutes" segment that aired in May 1996: Were the deaths of over one half million children under age 5 an acceptable price to pay for a dubious policy? "I think this is a very hard choice, but the price," Albright said, "we think the price is worth it."

Gabe and Theresa begged to differ.

Voices in the Wilderness was based in a second-floor apartment on Chicago's north side, a few miles south of Gabe and Theresa's home in Evanston. Eyes lit up inside "the office" whenever the pair came up the stairs. Along with their encouragement and wisdom, they would always bring fresh baked pastries or a loaf of bread.

By the time the U.S. military had geared up for the 2003 Shock and Awe campaign, Iraqis had already been pummeled, starved, humiliated and bereaved. "You come and you say, you will do, you will do," said one Iraqi teenager, addressing a delegation of U.S. people visiting her high school class. "But nothing changes. Me, I am 16. Can you tell me, what is the difference between me and someone who is 16 in your country? I'll tell you. Our emotions are frozen. We cannot feel!" She sat down, suddenly overcome by feelings of anguish.

Many people worldwide may have been led to think that only one person lived in Iraq, Saddam Hussein. Voices in the Wilderness delegation members cultivated a passion to tell people about what they had seen and heard while visiting Baghdad, Basra, Mosul and other Iraqi cities. Gabe and Theresa exemplified a beautiful ability to explore history, culture, complexity, diversity and nuance, wherever they traveled. To this day, they maintain close friendships with people they first met during their visits to Baghdad. Always, their concern for children occupied the forefront of their distress and commitment.

Their research and study, along with their good humor, helped all of us gain needed maturity as we tried to campaign for ending the hideous economic war and prevent a new round of bombing and invasion.

Having watched them in action through many years of Voices in the Wilderness witness and work, I wasn't surprised by their readiness to become rooted in Damascus, intent on finding ways for ordinary U.S. people to begin reparations to Iraqis whose lives have been forever altered and traumatized by successive U.S. military and economic wars. But I often feel mesmerized by their seemingly endless capacity to learn, grow and serve. I remember visiting them in Damascus when they were learning Arabic. Diligent in their studies, they knew they must give immovable priority to daily lessons.

Yet they also managed to invite young people to study with them, sharing with others their remarkable tutor, Mazen. Young people who went to study Arabic in Damascus could count on Gabe and Theresa for help with housing and orientation. What's more, they would be treated to enlivening trips and boundless encouragement.

Eventually, these two efficient and hospitable teachers began to imagine practical, sustainable ways to help Iraqi youngsters, displaced by war, continue their studies. In September 2016, a United Nations commission for refugees report noted: "Nearly two-thirds of the six million school-age children classified as refugees have no school to attend. … Roughly 1.75 million refugee children are not enrolled in primary school and 1.95 million refugee adolescents are not in secondary school."

"It is essential that we think beyond basic survival," said Filippo Grandi, the United Nations high commissioner for refugees.

Gabe and Theresa had identified one of the most grievous results of war and displacement. A new generation becomes undereducated, less able to care for their families and meet basic needs.

Ever appreciative of challenges and confident in their exceptional capacity to team up, they explored the many strands needed to develop potential for Iraqi youngsters to attend universities in the U.S. The Iraq Student Project became a growing tapestry.

The Iraqi Student Project also connected them to a staggering array of bureaucratic requirements. With numerous forms to fill out and interviews to face, they doggedly pursued university admission and a U.S. student visa for each student.

I marveled at their indefatigable, constant attentiveness to so much detail. They look back on those rigors with good humor and a gentle irony.

Pope Francis exhorts listeners to overcome the fears that drive people to seal themselves off from others. With the walls come weapons, and the weapons lead to war. "Why," Francis asked, when addressing the U.S. Congress in 2015, "would anyone give weapons to people who use them for war?" The answer, he said, was simple. "The answer is money, and the money is drenched in blood."

Weapons and bloodshed have wreaked new chaos and havoc, destroying the lives and homes of people throughout Syria and beyond. Gabe and Theresa left Damascus in 2012. Since that time, thousands more have been displaced. The U.N. estimated in April 2016 that at least 400,000 Syrians have been killed. The rivers have become torrents of blood.

Last summer, Gabe and Theresa published Never Can I Write of Damascus: When Syria Became Our Home (Just World Books) recounting in intimate detail the plethora of sights, sounds, aromas, delicacies and intricacies of the city as experienced over the seven years when they resided there. Most of all, though, the book is about the people they met and grew to love. The book does what Theresa and Gabe have always done: introducing people to other people, connecting lives

When I last visited with Gabe and Theresa, they shook their heads in silent sorrow, contemplating the ruinous debacle of endless war. Nevertheless, they have discovered ways in Istanbul to assist young refugees seeking continued education. When walls arise that would seem to seal the tragedy of war in concrete boundaries, Gabe and Theresa find ways to cross the borders.

[Kathy Kelly is a peace activist, pacifist, and co-coordinator of Voices for Creating Non-Violence.]

*The editor's note has been updated to clarify some language.

A version of this story appeared in the Feb. 10-23, 2017 print issue under the headline: Pair perseveres in aiding Iraqi children.