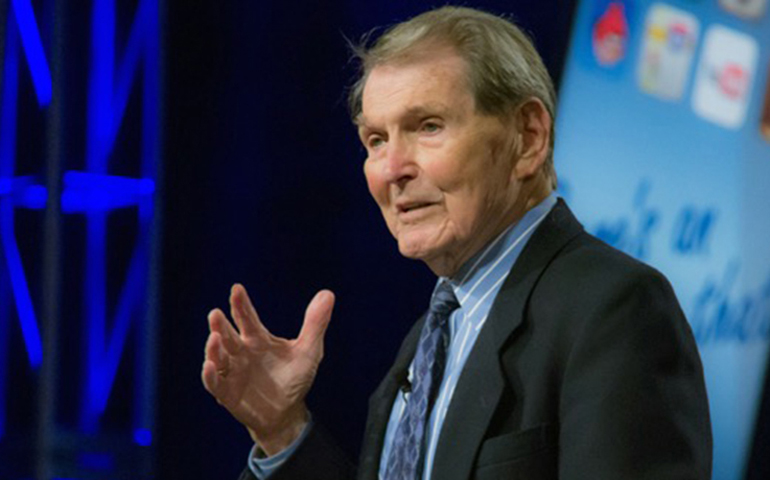 Tim LaHaye, the evangelical leader known for his conservative politics as well as the best-selling "Left Behind" series, has died at age 90, his ministry announced. (Photo courtesy of Evangelical Press Association)

Tim LaHaye, the evangelical leader known for his conservative politics as well as the best-selling "Left Behind" series, has died at age 90, his ministry announced.

LaHaye died Monday at a hospital in the San Diego area after recently suffering a stroke, his ministry said.

"Thrilled as I am that he is where he has always wanted to be, his departure leaves a void in my soul I don't expect to fill until I see him again," said co-author Jerry B. Jenkins in a statement on the death of his co-author of the apocalyptic series.

LaHaye and Beverly, his wife of 69 years, were an evangelical power couple, with him serving as a pastor, religious broadcaster and the founder of Christian high schools and her founding Concerned Women for America, a prominent conservative organization.

"Between his theology and his co-writer Jerry Jenkins' writing ability, the two of them really managed to capture the popular imagination," said Marcia Z. Nelson, contributing editor and former religion book reviews editor at Publishers Weekly.

The "Left Behind" series, a modern-day morality tale, told of how an airline captain tried to find his family -- and struggled with his own failings -- after believers were suddenly "raptured" into heaven and nonbelievers were left to face tribulations on earth.

The series was first published in 1995, in the run-up to the new millennium, which prompted anxiety among end-times believers as well as others. LaHaye's contributions to those books made his apocalyptic theology more engaging and approachable to a more general readership.

"To some extent I think it was like right, time right place 'cause it started the middle '90s," Nelson said. "I really do think that there is a definite connection between that kind of sort of generalized anxiety about what's going to happen and the popularity of the 'Left Behind' books."

LaHaye had long been a proponent of relying on the Bible for prophetic messages.

"Everyone wants to know about the future and there's a lot of discussion, but only the Bible gives concrete answers," LaHaye said in a story published in 2005 by Religion News Service. "What people don't realize is that 28 percent of the Bible was prophetic at the time it was written. There are over 1,000 prophecies in the Bible, half of which have already been fulfilled."

One of his key roles in U.S. politics was to encourage the late Rev. Jerry Falwell Sr. to start the Moral Majority, urging previously reticent conservative Christians to speak out about their values and views. LaHaye had gathered Southern California pastors to counter progressives but thought a national organization should be formed.

Beyond the 16-book "Left Behind" series, LaHaye wrote dozens of other books, on topics such as family life, Bible prophecy and critiques of secular humanism, that sold millions of copies.

Christian author Tom Sine was critical of LaHaye's role with the religious right, but agreed with the finding of the institute, saying that he was influential in fostering the "politics of fear."

"Tim LaHaye has become such a dominant influence in American Christian culture because he has defined the terms of America's culture war," wrote Sine, author of "Cease Fire: Searching for Sanity in America's Culture War," in a 2001 article in Sojourners, responding to the recent designation by the ISAE.

The son of a Detroit autoworker, LaHaye was an Air Force veteran and a graduate of the ultra-conservative Bob Jones University. He pastored churches in South Carolina and Minnesota before moving to California. He led the Scott Memorial Baptist Church in San Diego County for 25 years, expanding it to three locations, including Shadow Mountain Community Church, an evangelical megachurch in the San Diego suburb of El Cajon.

"Tim was one of the most godly men I have ever known," said David Jeremiah, the current senior pastor of the El Cajon church. "Almost every conversation I had with him ended with his praying with me and for me."

The Rev. Samuel Rodriguez, president of the National Hispanic Christian Leadership Conference, praised LaHaye for the range of his contributions.

"Dr. LaHaye has blessed the church in America with a legacy that will far outlast his time on this earth," he said. "The principled stand he took on countless issues has impacted the social, cultural, and political landscape for generations. He was a once-in-a-millennium type of leader who paved the way for future generations."

The last tweets before the announcement of his death on LaHaye's Twitter account were two quoting the Gospel of Matthew about focusing on heaven rather than earth.

"Don't store up treasures here on earth where they can erode away or may be stolen," they read. "Store them in heaven where they will never lose their value and are safe from thieves. If your profits are in heaven, your heart will be there too."