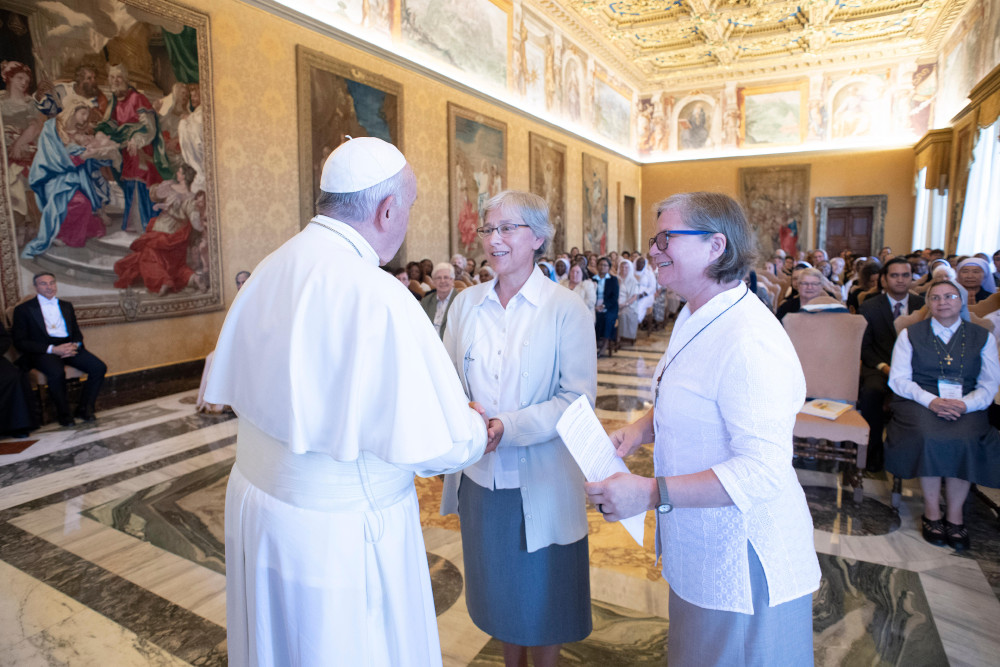 Pope Francis called on more religious orders of men and women, as well as foundations and benefactors, to get involved and help an international network of women religious in the fight against human trafficking.

He praised the many institutes of consecrated life that already have supported their members working on prevention, public awareness and assisting survivors of trafficking through the network, Talitha Kum.

"While I invite you to continue this commitment, I am also making an appeal to other religious congregations — both women's and men's — for them to join this missionary work, putting people and resources at its service so that it can reach everywhere," he told network members during an audience at the Vatican Sept. 26.

The pope met with some 86 delegates of Talitha Kum from 48 different countries and other people taking part in the network's general assembly Sept. 21-27.

Founded 10 years ago, Talitha Kum now coordinates 52 networks of religious women in more than 90 countries. With more than 2,000 people on the ground, their efforts have helped more than 15,000 victims and reached more than 200,000 others through educational and awareness-raising campaigns or workshops in the past decade.

These many congregations deserve recognition for being the "vanguard" and working on the frontlines in the church's missionary efforts against human trafficking, he said.

Their working together "is an example for the whole church, also for us, men, priests, bishops. An example. Keep going like this," he added.

During its assembly, the network was discussing current challenges and new strategies, and the pope praised the way they were looking to increase the quality and effectiveness of assistance to local churches.

He encouraged orders that have given permission to their members to be part of this anti-trafficking network to keep up the support and he urged more congregations to get involved with Talitha Kum.

Speaking off-the-cuff, the pope said he understood that many religious congregations faced a number of problems and may not want to get involved because of their own struggles.

"Tell them the pope said that internal problems are solved by getting out onto the street, letting in fresh air," he said.

"I also hope for an increase in foundations and benefactors who can guarantee their generous and impartial support of your activity," he added.

Because of the vast and complex nature of human trafficking, every level and facet of the church needs to be involved, he said.

He encouraged local churches and bishops to involve their local women and men religious and Catholic organizations in their pastoral planning in order to make the church's response against trafficking more rapid and effective.

The pope concluded by offering his advice: Never end the day without thinking of and reflecting on the face of one of the survivors. "This will be a beautiful prayer," he said.

This story appears in the Talitha Kum 2019 feature series. View the full series.