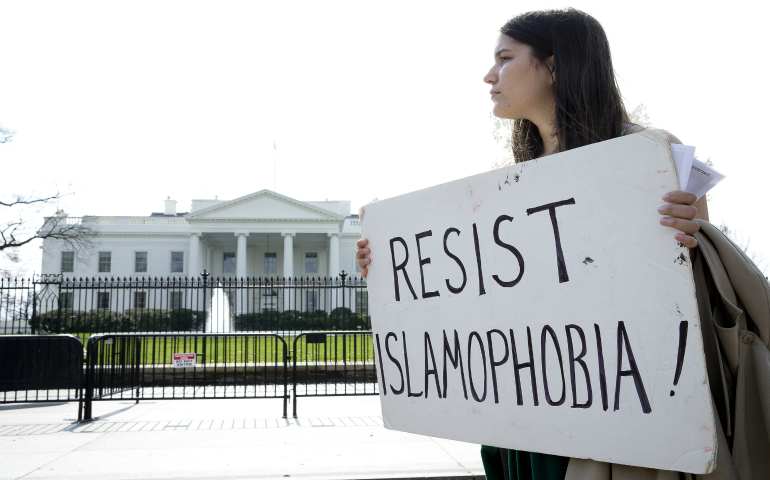 A peace activist attends an Ash Wednesday prayer service outside the White House in Washington March 1.

Iraq had been one of seven nations in the original order, issued Jan. 27 but the implementation of which was blocked in the courts. The new order will not take effect until March 16.

Citizens of four of the countries still part of the ban — Iran, Libya, Somalia and Syria — will be subject to a 90-day suspension of visa processing. This information was given to Congress the week prior to the new executive order. The other two countries that remain part of the ban are Sudan and Yemen.

While the revised executive order is intended to survive judicial scrutiny, those opposed to it have declared plans to mobilize their constituencies to block it. Church World Service and the National Council of Churches announced March 2, that they will unveil a new grass-roots ecumenical initiative in support of refugees.

Catholic immigration advocates were on tenterhooks waiting for the revised executive order, the issuance of which had been long promised but slow in coming.

Bill O'Keefe, vice president for government relations and advocacy at Catholic Relief Services, the U.S. bishops' international aid agency, told Catholic News Service that he had seen communications from "senior White House officials" that would retain the ban, but indicated the indefinite ban on Syrians would be lifted.

Religious preferences found in the original order would be erased, but green-card holders would be exempt from the ban, O'Keefe said. The halt of refugee admissions to "determine additional security vetting procedures" would stay in place, he added, and the number of refugee admissions would be cut for the 2017 fiscal year, which runs through Sept. 30, from 110,000 to 50,000; an estimated 35,000 have already been admitted since October, according to O'Keefe.

"Some will argue that simply sectioning out the seven Muslim-majority countries is a form of religious discrimination," O'Keefe said. "What is clear here is that's it's within the prerogative of the president to lower the threshold of refugee admissions."

One effect of the order would be to further strain the refugee-processing system at its biggest point. "The bulk of the system and the biggest part of it are those countries like Lebanon, Turkey, which are taking in hundreds of thousands of refugees," O'Keefe said. "When we don't do our part, it's tough for us to tell other countries to make the sacrifices we need to play their part. The risk of the system collapsing and of governments that are already strained not being willing to keep their doors open is very serious, and we're very worried about that."

In Syria, he added, "some people have been (refugees there) for five, six years. They've had the hope of resettlement in the United States as one of the things that keeps them going."

Kim Pozniak, CRS' communications director, spent a week in mid-February in Amman, Jordan, where untold thousands of refugees are living — two and three families at a time — in small apartments in the city.

"I've met with people that are worse off than they were three years ago (when she last visited), simply because they've started losing hope," Pozniak told CNS. "One woman, for example, said they're so bad off they're considering moving back to Syria." Pozniak said the woman's sister, who still lives in Syria, told her "Look, even if it's so bad that you have to eat dirt, don't come back here."

"When I visited three years ago hope of (things being) better in Jordan, being resettled somewhere, or even going back to Syria," Pozniak said. Now, none of those options seem to be on the table.

Even without a ban, the uncertainty can eat away at people, Pozniak said. "I talked with one 74-year-old woman who together with her son has been in the resettlement process in the United State4s. They had the interview with UN (High Commissioner for Refugees), the interview with the Embassy, had the iris scan taken, now they have no idea when they'll be resettled. They're never given an answer as to when, where, how, and that's the really frustrating part — being in limbo and not knowing where you're going to be next."

Even though Jordan prohibits refugees from taking jobs, "desperate" people "find a way somehow" to provide for their family, Pozniak said. CRS is offering modest help to some refugees. "We support some cash-for-work projects through Caritas Jordan, teaching refugees and Iraqis some new skills they can use and make a little bit of money," she added. "For example, we have people in workshops who create mosaics and create packaging, and create handicrafts."

Pozniak said refugees were incredulous when she told them Americans are afraid of refugees, especially those from Syria. "They had this look on their faces, uncomprehending. 'What are they afraid of? We're fleeing the violence. We want the same thing, peace.' If people could listen to their stories, I think the reactions would be a lot different."

A Rasmussen Reports telephone poll of 1,000 American adults released Feb. 24 said 54 percent of all voters believe increasing the number of refugees from Syria, Iraq and other countries included in the Jan. 27 executive order poses an increased national security risk to the United States. This is down from September, when 62 percent said President Barack Obama's proposal to increase the number of Middle Eastern and North African refugees allowed into the United States posed an increased national security risk. The poll was conducted Feb. 20-21.