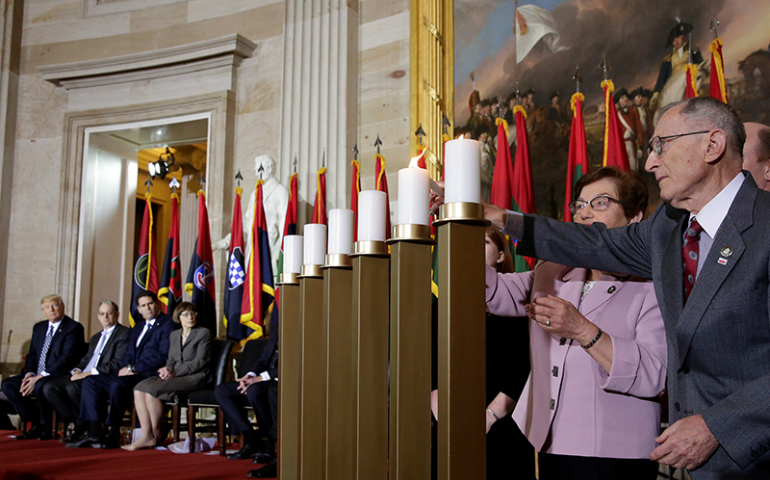 Some Holocaust survivors decided to skip the annual Holocaust Remembrance Day event at the U.S. Capitol when they found out the president of the United States would give the keynote.

But Manny Mandel, a survivor who did attend the ceremony at the Capitol Rotunda on April 25 and lit one of the memorial candles, said he thought the president rose to the occasion.

“I was very pleasantly surprised. I thought the man was on target. I thought the man said all the right things,” said Mandel, 81, a Lithuanian-born retired psychotherapist from Silver Spring, Md., who spent part of his childhood in the Bergen-Belsen concentration camp.

Mandel, as well as many other survivors and Jewish leaders who reject Trump’s agenda, praised the president’s strongly worded speech against the evils of the Holocaust, even as they remained unconvinced that he would translate its ideals into policy.

Before the event, many Jews had spoken of their discomfort with Trump as the keynote, referencing his history of disparaging rhetoric against religious and ethnic minorities. They pointed to his flirtations with anti-Semitic individuals among the far right, and his tough stance on immigrants, who, much like the Jews did during the Holocaust, look to the U.S. for protection.

“What he believes, knows, and will do, I have no idea,” added Mandel, who said he had thought Trump had blown off the event when he saw Vice President Mike Pence walk into the rotunda first.

But “I’m glad he showed up. I would have preferred somebody else. But I respect the office of the president.”

Trump’s speech preceded one of the most somber moments of the hour-long ceremony: the lighting of six candles to represent the six million Jews who died in the Holocaust. Fewer and fewer survivors are alive for the ceremony each year, and most, like Mandel, were children during the Holocaust.

This year’s ceremony was the first since the death of author and human rights activist Elie Wiesel, the survivor who spoke at the first such ceremony 38 years ago. Trump paid tribute to Wiesel, to the Holocaust’s victims and to the American soldiers who liberated Hitler’s concentration camps.

“I am deeply moved to stand beside people who survived history’s darkest hour. Your cherished presence transforms this place into a sacred gathering,” Trump said.

“We will never ever be silent in the face of evil again,” he promised.

Trump received a standing ovation from most of the hundreds crowded under the Capitol dome. Some guests remained seated, hands folded in their laps.

As a group, American Jews voted against Trump by a greater proportion than any other religious group  — 71 percent voted for Democrat Hillary Clinton, 24 percent for him.

They have called him out for his administration’s gaffes on the Holocaust and his slowness to call out rising anti-Semitism in the U.S. The White House, for example, issued a statement for International Holocaust Remembrance Day in January that didn’t mention Jews.

In the days before Tuesday’s event, Bend the Arc Jewish Action, a nonprofit liberal advocacy group, had urged the United States Holocaust Memorial Museum, which organized the ceremony, to rescind the invitation to Trump.

“Trump’s demonization of immigrants and Muslims, his denigration of the press, his attacks on the judicial system and other actions that seek to undermine the institutions that protect our civil society, coupled with his ongoing admiration for authoritarian leaders, illustrate both his failure to learn the painful lessons of the Shoah and his contempt for the most fundamental democratic, Jewish and American values, said Stosh Cotler, the group’s CEO, using the Hebrew word for the Holocaust.

Events for the Days of Remembrance were also held earlier in the week. Mandel said he’d heard that some didn’t stay for the Rotunda ceremony “because of Trump.”

Felice Zimmern Stokes, a German-born survivor whose parents died in Auschwitz and who voted against Trump, lauded the president for keeping to the script during his address, and thought he spoke genuinely when he decried the scourge of anti-Semitism.

“He respects us so I’ll respect him,” said Stokes, 77, of Teaneck, N.J. “Until he really comes out and says a very negative thing, then let’s give him a chance.”

Theodora Klayman, 79, a retired ESL teacher who was born in what today is Croatia, had a hard time squaring Trump’s latest words with his campaign speeches, which, she said, seemed to scapegoat minority groups in America.

“But this was a fairly forceful expression of support for the Jewish minority and also for Israel,” she said.

Trump praised Israel during the speech, which was preceded by a remarks from Ron Dermer, Israel’s ambassador to the United States.

Dermer called the establishment of Israel, founded in the wake of the Holocaust, a defiant response to the indifference the world had shown the Jews.

Its founders “transformed a powerless people marked for annihilation into a sovereign nation capable of defending itself,” he said.