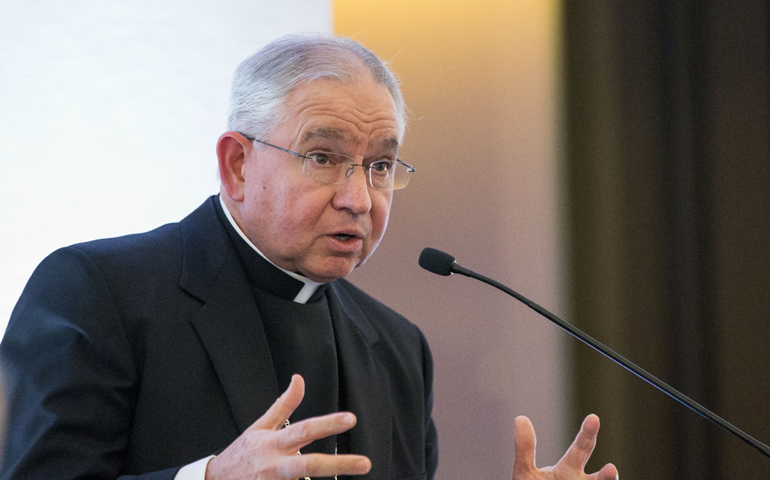 Archbishop José Gomez of Los Angeles gives the closing keynote address Jan. 19 at Vatican-sponsored conference on mass migration and humanitarianism at the University of California in Los Angeles. (CNS/J.D. Long-Garcia, The Tidings)

The U.S. Conference of Catholic Bishops, who last week marked a national week of prayer and education on immigration issues, hope the new Trump administration will work with them on comprehensive immigration reform.

"We especially are very much concerned about keeping families together, and at the same time realizing, yes, that there is an importance to respect the laws of this nation as well as to provide security on the borders … but never to lose that human face of the reality of what is going on," Bishop Joe Vasquez of Austin, Texas, said. "We're hoping the new administration will work with us to create equitable laws, keeping in mind the dignity of human refugees."

Vasquez, chairman of the U.S. bishops' Committee on Migration, spoke to media on a conference call Jan. 12.

The bishops' conference observed National Migration Week Jan. 8-14 to raise awareness of how immigrants and refugees have contributed to the Catholic church, and the difficulties they, along with children and victims and survivors of human trafficking, face daily.

The bishops have not taken a formal stance on President Donald Trump's proposed border wall. Vasquez said the bishops are currently more concerned about supporting legislation that would continue the Deferred Action for Childhood Arrivals (DACA) program, which would allow qualified undocumented individuals who immigrated to the United States as minors to defer deployment for a period of two years.

At a prayer service three nights after the election, Archbishop José Gomez of Los Angeles, vice president of the bishops' conference, gave a homily about increasing uncertainty and fear among immigrants in the United States. During a teleconference with journalists on Jan. 12, Gomez said he thinks that fear still exists today.

"That's why this National Migration Week is so important," Gomez said. "I know that many dioceses have been present for their people, and I think that the conference of bishops can be present for the people and give the sense of peace and we are together."

This year's theme for National Migration Week was "Creating a Culture of Encounter," in reference to Pope Francis stressing the significance of encounter in Christianity in his first homily for Pentecost as pope in 2013: "For me, this word is very important. Encounter with others. Why? Because faith is an encounter with Jesus, and we must do what Jesus does: encounter others."

The U.S. bishops' website says migrants are not treated as fellow children of God worthy of support like they should.

Vasquez thinks National Migration Week is a great opportunity to highlight Matthew 25:35-40: " 'For I was hungry and you gave me food, I was thirsty and you gave me drink, a stranger and you welcomed me, naked and you clothed me, ill and you cared for me, in prison and you visited me' … And the king will say to them in reply, 'Amen, I say to you, whatever you did for one of these least brothers of mine, you did for me.' "

In addition to establishing communication within the incoming administration, the bishops are looking to engage at the local and state levels by working with local communities and dioceses. The conference has also been working to build coalitions on border control with other faith-based communities, including Jewish and Muslim groups.

"Violence, gang, warfare … and some of them are also survivors of human trafficking. It's important that we hear those voices," Vasquez said. "These are people; they have real realities that are going on in their lives. It's important to see them not as problems but as persons. …We have to have a heart of compassion … to be willing to help strangers."

According to the U.N. High Commissioner for Refugees, among the 65.3 million people forcibly displaced worldwide, 21.3 million of them are refugees, half of whom are under the age of 18. Approximately 34,000 people are forcibly displaced every day. Twelve percent of those displaced people settle in the Americas.

[Shireen Korkzan is an NCR Bertelsen intern. Her email address is skorkazn@ncronline.org.]