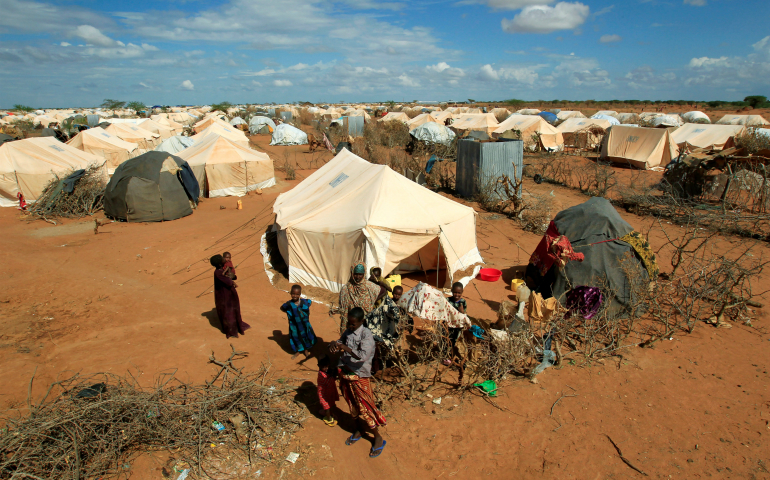 Refugees stand outside their tent in 2011 at the Ifo Extension refugee camp in Dadaab, Kenya, across the border from Somalia. (CNS photo/Thomas Mukoya, Reuters)

Aden Batar's first taste of Utah came more than 20 years ago as a high school student in his native Somalia. An agriculture team from Utah State University had traveled there to work with Somali farmers on their farming techniques. Batar was a promising student then, learning about the snow in Salt Lake City from the ag workers, studying English and planning for law school.

This was before the government collapsed in 1991, plunging Somalia into a seemingly never-ending civil war, which killed an estimated half-million people. Batar earned his degree but would never practice law there. He left his homeland for Kenya, where he volunteered for two years with an American refugee resettlement program in the Utange camp in Mombasa. His English skills got him the job and came in handy a few years later when he left Africa and became a refugee himself. In Utah.

Now 48, Batar was the first Somali refugee resettled by Catholic Community Services (CCS) of Utah in 1994. The agency has helped to resettle close to 7,000 men, women and children in the state, the majority since 1996. That same year, Batar got a job as a case manager with CCS in part because he could speak Somali.

"Utah is home to more than 60,000 refugees," said Batar, now the immigration and refugee resettlement director at CCS, which is affiliated with the U.S. Conference of Catholic Bishops. He credits a partnership between the Catholic church and the Church of Latter Day Saints for much of the immigration work done in the state. "Even people that live here, they don't even know they have that many refugees in the state."

Many more people may become aware of that now, with the airing of a PBS Visionaries documentary special, "The Story of Us," that focuses on the work of CCS and Holy Cross Ministries, an affiliate of the Catholic Legal Immigration Network, Inc. (CLINIC), which works with undocumented victims of sexual assault, domestic violence and human trafficking.

The individuals and families that CCS and Holy Cross Ministries work with come from more than 20 countries — throughout Africa and Latin America, from Bosnia, Iraq, Vietnam, the former Soviet Union — according to Batar's last count. Many, like Batar, are fleeing violence or persecution back home; some find more of the same when they resettle. All of the refugees need help, from the basics of food and furniture to jobs and legal aid.

"Our purpose is to meet the unmet needs of the underserved," said Holy Cross Sr. Kathleen Moroney, a senior attorney at Holy Cross Ministries. "We started as one person doing outreach, general immigration, trying to give them enough information so they don't make the situation worse than it is."

Moroney, who will retire this summer after nearly 40 years of practicing law for the Sisters of the Holy Cross, fell into immigration law 10 years ago after a long stint as finance officer at the sisters' corporate offices and two years as a missionary in Brazil. In deference to her mother's concerns about her safety, Moroney returned to the U.S.

"I thought, well, there'll be enough work. Shows you how ignorant I was of the needs of immigrants, even 10 years ago," she said with a laugh. She did an internship at Catholic Charities in Washington, D.C., where, she said, she "learned a little bit about immigration before I got here and started doing it."

The work of the two agencies overlaps at times, but their areas of focus are fairly distinct. Catholic Community Services works to resettle refugees, providing housing and food assistance, job placement, healthcare, interpretation services, and foster care for unaccompanied minors — of whom they are currently responsible for 90. They also provide legal representation to immigrants and refugees who seek to change their immigration status and offer services to the local homeless population.

Batar came to this country as a lawyer, but the prospect of going to law school again was too onerous for a man with a wife and two small children (three more would be born in the United States). Instead, he trained through CLINIC to become accredited with the Board of Immigration Appeals, which certifies individuals to represent clients in immigration proceedings, with the supervision of an attorney.

Both CCS and Holy Cross Ministries avail themselves of this provision.

"The immigration bar in Utah is very friendly, very cooperative. They try to help out," said Batar. "Some of the attorneys will get together and have clinics in the evening where they provide free immigration consultations. There are not enough attorneys who will do it for lower fees."

Moroney said her agency has taken more than 4,000 cases in the last 10 years.

"You think, oh, that's not too many people. But if it's a parent who's the victim, then all the children have a parent with legal status and the ability to earn an income legally," she said. "It's rewarding, but it's a hard area of immigration."

In the Visionaries documentary, several women speak through interpreters about their experiences of domestic violence and their fear of coming forward to report it, lest they be deported.

Concerns about terrorism and the prospect of harsher immigration laws under the incoming Donald Trump administration aren't making the work of CCS and Holy Cross Ministries any easier, but they've frankly got too much on their plates right now to worry much about what might happen in the future.

If it's still a surprise that so many refugees end up in Utah, it may be even more so to learn that they are often the "most difficult to serve," Batar said. The refugees are usually part of large families, people with medical issues or disabilities, or women who have suffered trauma and are the head of household. Utah is popular not just because housing is inexpensive there, although it is, Batar said.

"It's kind of woven into the fabric of the people, from a very young age, you're encouraged and taught to reach out and bless the lives of others, to look for people who are in need, to find ways to lighten their burden," said Rick Foster*, manager of North American humanitarian operations for the LDS Church in America and Canada, and a frequent partner to CCS. He was speaking of his fellow Mormons, but also of the larger culture of the state. "This is a natural way for us to extend that service outside the confines of our congregations."

"The beautiful thing about the partnership with CCS and other agencies across the nation is that we, as an organization, want to do good and provide support and assistance, but there are some things we don't know how to do or do well, that others are better attuned to doing," said Foster. "There are bits and pieces we can provide, but it's the whole community that comes together and provides all of the pieces of the puzzle, to serve refugees."

Foster calls it "wrapping their arms around them," a practice that is in evidence at the end of "The Story of Us," as a new immigrant family arrives in the Salt Lake City airport. They are greeted not just by extended family members, but by strangers from within their ethnic community who have been recruited by CCS to be there, with signs, balloons and warm smiles.

"That's the moment that makes our day," said Batar, who experienced it himself more than 20 years ago. "We see the families that have been separated for so many years, and they are reunited. Every single family, that is the warm welcome that they receive, whether they have families or not."

"The Story of Us" is available at www.visionaries.org (Season 21, Episode 3). CLINIC is developing a toolkit for parishes and other groups to use the documentary in educational and outreach efforts. See https://cliniclegal.org/theStoryofUs for more details.

[Julie Bourbon is a freelance writer, editor and communicator in Washington, D.C.]

*The original version of the story had Rick Foster's name incorrect.