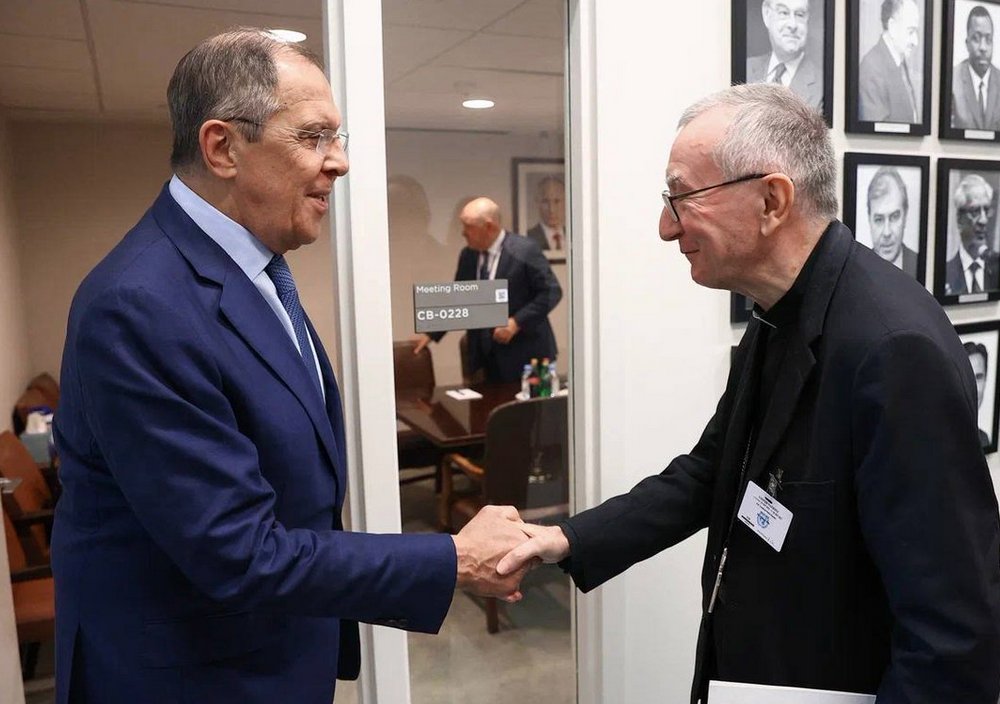 While the Vatican press office issued no statement regarding Parolin's Sept. 22 meeting, the Russian foreign ministry tweeted a video of the two officials shaking hands and exchanging greetings.

"We thank you for the suggestion to have this meeting," Lavrov is heard telling the cardinal. "We appreciate your efforts in this not-very-quiet time."

The Russian foreign minister continued expressing his appreciation for the cardinal's efforts "to promote more stability, more justice and, of course, the rule of law." The Russians' video stopped there.

In a statement published after the meeting, the Russian foreign ministry said Lavrov "made clear the reasons for the ongoing crisis in relations between Russia and the West" and blamed increasing tensions on "NATO's crusade to destroy Russia and split the world."

After Ukraine's counteroffensive drove Russian troops from occupied territories, on Sept. 21 Russian President Vladimir Putin announced a partial mobilization of military reservists and threatened the use of nuclear weapons to defend Russian territory.

Lavrov told Parolin that "the steps taken by Russia are designed to ensure independence and security, as well as to counter the United States' hegemonic aspirations to control all global processes."

The day before their meeting, Parolin addressed the 10th meeting of the Friends of the Comprehensive Nuclear-Test-Ban Treaty.

In that speech, Parolin warned that "as global tensions rise and we hear rhetoric threatening the use of nuclear weapons, it is more crucial than ever to bring the Comprehensive Nuclear Test Ban Treaty into force."

The multilateral treaty, which bans all civilian and military nuclear weapons test explosions, was adopted in 1996 by the U.N. General Assembly. However, several countries, including the United States and China, have not ratified the treaty.

Speaking to journalists Sept. 15 after his visit to Kazakhstan, Pope Francis emphasized the need for dialogue, even if it means engaging "with states that have started a war."

"I don't exclude dialogue with any sort of power that is at war, even if it is with the aggressor," the pope said. "It may 'smell,' but one has to do it. But we must always be one step ahead, with an outstretched hand, always! Otherwise, we close the only reasonable door to peace."