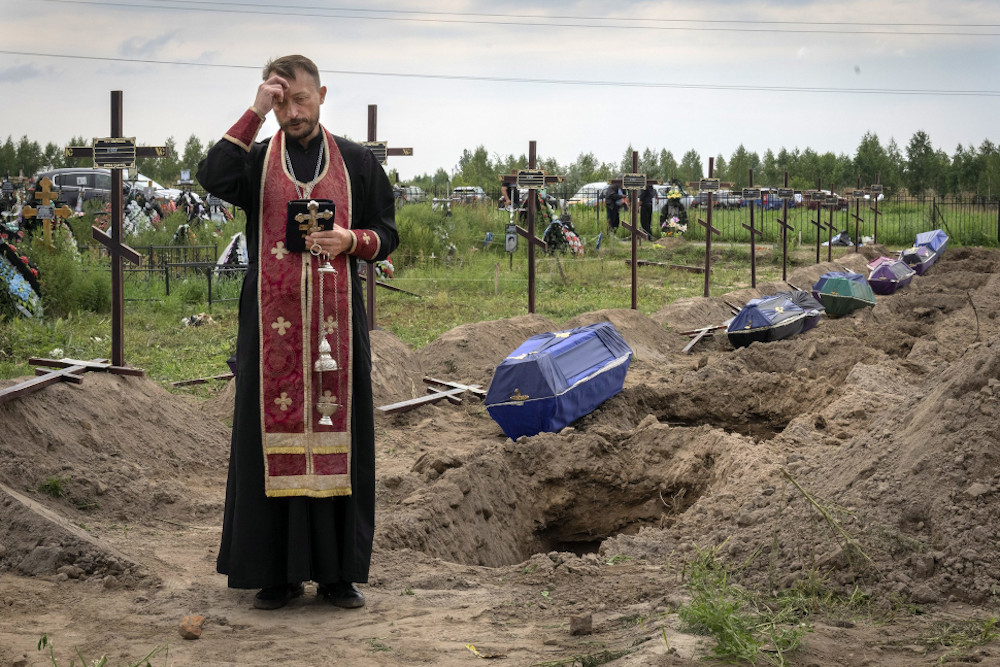 A priest prays Aug. 11 for unidentified civilians killed by Russian troops during Russian occupation in Bucha, on the outskirts of Kyiv, Ukraine. (AP/Efrem Lukatsky)

Six months into the war in Ukraine, Catholic prelates in the bombarded country hope to rally the spirits of Ukrainian citizens, while urging world leaders to remember their plight. Meanwhile, Pope Francis continues to call for dialogue.

"Ukraine is standing. Ukraine is fighting. Ukraine is praying," said Greek Catholic Archbishop Sviatoslav Shevchuk in his message from Ukraine on Aug. 15, which also marks the Catholic feast of the Virgin Mary's assumption into heaven.

Shevchuk has written daily bulletins from Ukraine, where he writes that faithful face "a full-scale, heavy, bloody war" launched by an "unjust aggressor." Russian President Vladimir Putin launched an invasion of Ukraine on Feb. 24, which he justified by condemning the country's intention to join Western alliances, including NATO, as a risk to Russia's national security.

The Greek Catholic leader has been outspoken in condemning the Russian invasion, in stark contrast with the Vatican's reluctance to point the finger at the Kremlin, an effort at diplomacy the Vatican hopes will leave open a path toward mediation.

In Monday's message, Shevchuk described the Russian attacks on residential quarters in Kharkiv. He also said Russian troops are targeting educational institutions hoping to begin the academic year in September. He emphasized the Catholic Church's stance in defense of human rights and its efforts to defend the most vulnerable, especially the sick, wounded and suffering.

"Our Church wants to be close to you," he said. "Know that in your hospital bed, in this bed of pain, you are not alone, the Lord God is with you. And your Church, your priests are also nearby."

Pope Francis has been outspoken on behalf of peace in war-torn Ukraine. During his Angelus address on Aug. 14, the pope prayed for "mercy and pity for the battered Ukrainian people." But Francis has avoided openly condemning Russia and, in a June interview, criticized those who would reduce the war in Ukraine to a question of good against evil.

The Vatican's diplomatic take on the Russian-Ukrainian conflict isn't always easy to accept for many Ukrainians, according to Monsignor Visvaldas Kulbokas, the Vatican envoy to Ukraine.

"The Holy Father isn't a politician, he's a pastor," Kulbokas said in an interview with Vatican media published Aug. 14.

"When the pope repeats his appeals for dialogue, which to us seems humanly impossible, if we are believers, we hope for the impossible and entrust this appeal, this prayer, not only to men but to God himself."

Kulbokas acknowledged that many Ukrainians struggle to believe in the possibility of peaceful negotiations, since they doubt Russia will change its position regarding the conflict. Instead of focusing on finding an immediate fix for the war, he said the local church is focusing on humanitarian aspects as a way to promote dialogue. He admitted global attention to the Ukrainian conflict has dwindled since the onslaught of the war.

"That's why the Holy Father repeats on every occasion that, at least in prayer, at least in the heart, the world doesn't forget the many families that are going through tough times," he said, "and that counts not only for Ukraine but also for other countries."