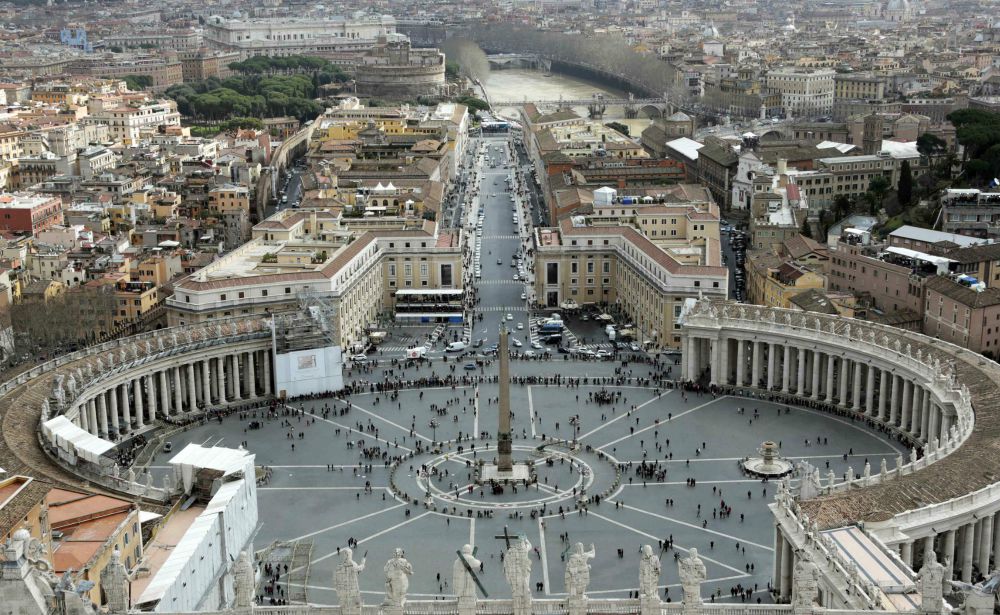 People walking through St. Peter's Square are seen from the dome of St. Peter's Basilica at the Vatican in this March 11, 2013, file photo. (CNS/Reuters/Eric Gaillardi)

A Vatican commission responsible for helping the Catholic Church study doctrinal issues has stressed the importance of including laypeople in the global institution's various authority structures, writing in a new document approved by Pope Francis that their involvement is "indispensable" in decision-making.

In a lengthy reflection meant to deepen the church's understanding of synodality, which was posted in Italian on the Vatican's website late May 3, the International Theological Commission says the theological concept is manifested "in the active participation of all [the church's] members."

"The ecclesiology of the People of God underlines the common dignity and mission of all the baptized, in the exercise of the multiform richness of their charisms, of their vocations, of their ministries," writes the commission in the document, titled "Synodality in the Life and Mission of the Church."

"The participation of lay faithful is essential," it later states. "They are the immense majority of the People of God and we have much to learn from their participation in diverse expressions of life."

"Their consultation is indispensable in getting started processes of discernment in the frameworks of synodal structures," it continues. "We must therefore overcome the obstacles represented by lack of formation and of recognized spaces in which the faithful laity can express themselves and act."

Synodality is a theological concept that Francis has referred to often in his five-year papacy. In 2015, he described it as the way in which people in the church learn and listen to each other and take shared responsibility for proclaiming the Gospel.

Francis has also highlighted the importance of the Synod of Bishops, an institution created by Pope Paul VI after the end of the 1962-65 Second Vatican Council that allows global prelates to come to Rome every few years for weekslong meetings to discuss issues facing the universal and local churches.

In their new document, which unfolds across four chapters, the theological commission calls synodality the "modus vivendi et operandi of the Church-People of God that concretely manifests and realizes its communion in walking together [and] in gathering in assembly."

The commission document focuses in its first half on the significance of synodality in church history before offering pastoral orientations for today's church. Its reflections include 170 footnotes spanning the full history of Catholic tradition: from the writings of Ignatius of Antioch, to the Council of Sardica, to the First and Second Vatican Councils, to Popes Pius XII, Paul VI, John Paul II, and Francis.

Before going into depth on the issue, the commission makes a distinction between synodality and the concept of collegiality among bishops. While synodality involves all members of the church, it states, collegiality "is the specific form in which ecclesial synodality manifests and realizes itself through the ministry of bishops."

The commission also highlights the work of Vatican II, saying its "fruits of renewal" included "promotion of ecclesial communion, of episcopal collegiality, of conscience and of the synodal approach" that have been "rich and valuable."

"However, many steps remain to be taken to complete the direction traced out by the Council," it states.

"Hence the threshold of novelty that Pope Francis invites to cross," it continues. "In the path traced by Vatican II and followed by his predecessors, [Francis] stresses that synodality expresses the figure of the Church that springs from the Gospel of Jesus and which is called to incarnate today in history, in creative fidelity to Tradition."

After tracing the history of synodality in the church in the first half of the document, the commission offers a three-part description of the concept as a "constitutive dimension of the church."

As part of that definition, the commission says synodality is "the peculiar style that characterizes the life and mission of the Church" and is expressed at the local, regional and universal levels with consultative structures "at the service of authentic discernment … called to identify the directions to follow in listening to the Holy Spirit."

"The principle of co-essentiality between hierarchical and charismatic gifts in the church must also be given value, based on the teaching of the Second Vatican Council."

— from "Synodality in the Life and Mission of the Church"

The document speaks about the involvement of laity in synodality in its third chapter, which focuses on how to actualize the concept within church structures. The commission also says that participation of members of religious orders is also important to acting synodally.

"The principle of co-essentiality between hierarchical and charismatic gifts in the church must also be given value, based on the teaching of the Second Vatican Council," it states. "This implies the involvement of communities of consecrated life, of movements and of new ecclesial communities in the synodal life of the Church. All these realities … can offer significant experience."

At its conclusion, the document offers five "fundamental lines of orientation in pastoral action" for the creation of a more synodal church:

In a brief note before the document, the Vatican says it was drafted by a sub-group of the larger commission, led by Fr. Mario Ángel Flores Ramos, rector of the Pontifical University of Mexico. Among the sub-group's members was also Mercy Sr. Prudence Allen, a former chair of the philosophy department at St. John Vianney Seminary in Denver.

The Vatican says the document was approved by the full commission during its plenary session last fall and then authorized to be published by Archbishop Luis Ladaria, the prefect of the Congregation for the Doctrine of the Faith, "after receiving a favorable opinion" from the pope.

The commission, made up of 30 theologians the pope appoints from around the world, was founded in 1969. Members of the group serve five-year terms, and the current term of the membership ends in 2019.

Besides Allen, the commission has one other member from the U.S.: Capuchin Fr. Thomas Weinandy, former executive director of the U.S. bishops' Secretariat of Doctrine. Dominican Fr. Serge-Thomas Bonino, a Frenchman, leads the group.