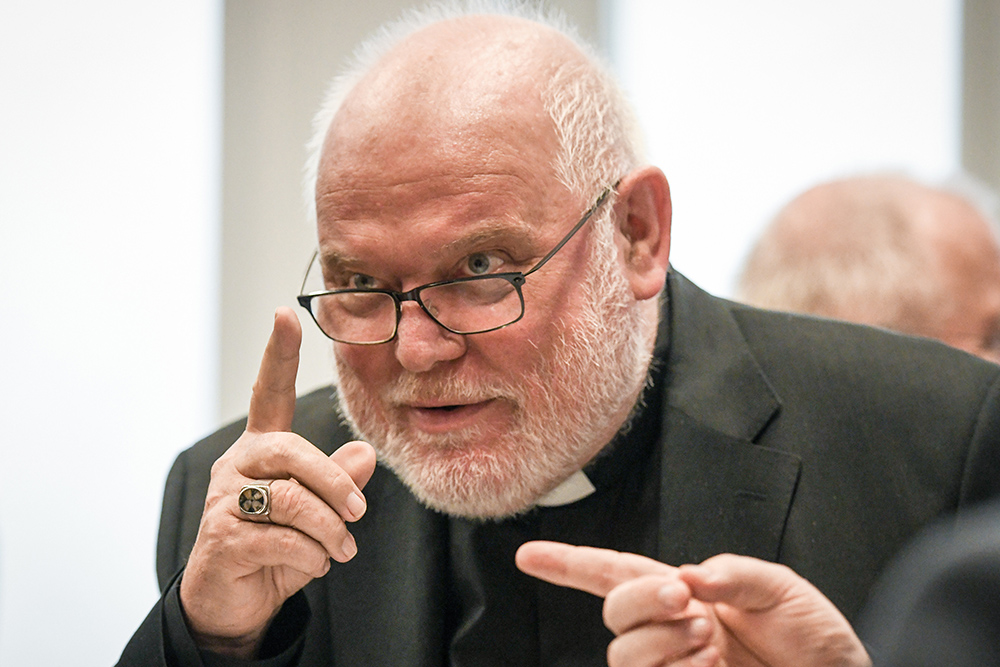 Cardinal Reinhard Marx of Munich and Freising, president of the German bishops' conference, gestures Sept. 13, during the extended Joint Conference of Bishops and Laity to prepare the "synodal way." (CNS/Harald Oppitz, KNA)

"There are no stop signals from Rome for the synodal way and we will proceed with it. That was the result of conversations in Rome and the unanimous opinion of our plenary conference here in Fulda following a long debate," according to a statement released by Cardinal Reinhard Marx of Munich and Freising, president of the German Bishops' Conference, for the assembly's conclusion on Sept. 26. "We will continually inform Rome about the synodal way."

Fulda, a small baroque city, was chosen as the site of the plenary assembly due to its great historical significance for the German church. Its cathedral holds the remains of St. Boniface, venerated as "the Apostle of the Germans." Participating in the assembly were 65 archbishops. Guests included representatives of the French and Polish bishops' conferences.

The assembly primarily aimed at discussing the synodal way. Strongly differing opinions emerged among sermons given by the bishops during daily Masses and in individual documents published by the German Bishops' Conference.

Marx urged participating bishops to be openhearted during his sermon at the assembly's opening Mass, asking them to recall that Jesus himself had undertaken new approaches to faith and community in his own time.

"There is no era when everything was better that we should hearken back to, or utopias where we should place ourselves — 'if only it were like then,' " said Marx. "Now is the hour. Now is the time. Today will things be done — or not done — in the moments that come to us."

By contrast, Cardinal Rainer Maria Woelki, archbishop of Cologne, released a written document analyzing Pope Francis' instructions to the German church. Woelki stressed his concerns about potential "risks" posed by the synodal way regarding impacting universal teachings of the church.

"Aside from opportunities, the synodal way however poses the great risk of primarily — indeed, almost exclusively — taking structural changes into view and ultimately putting them into practice," Woelki wrote, addressing his fellow bishops.

"Of course, organizational and structural adjustments must from time to time be undertaken. But because the problem we face, especially the crisis of faith, is comprehensive, our reaction and our synodal work must also be just as comprehensive," Woelki wrote. He expressed his view that the church, in this time of crisis, requires more than administrative changes.

Woelki's position differs drastically from that of other members of the bishops' conference who express unconditional support for the synodal way. 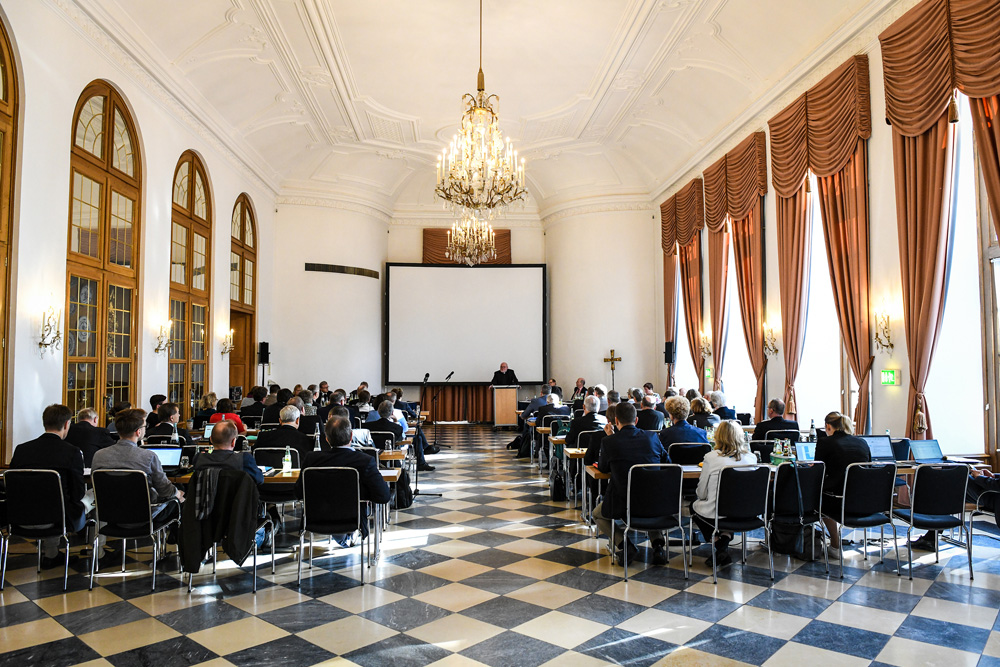 Cardinal Reinhard Marx of Munich and Freising, president of the German Bishops' Conference, speaks Sept. 13, during the extended Joint Conference of Bishops and Laity to prepare the "synodal way." The bishops of Germany, reacting to an independent study of the extent of clerical sexual abuse in their country and its possible causes, chose to initiate a "synodal" process that was not a synod or a plenary council. (CNS/Harald Oppitz, KNA)

Coincidentally, Woelki's Sept. 25 homily at the Fulda assembly focused on St. Nicholas of Flüe, who he described as persecuted by his contemporaries for his pursuit of truth.

"Whoever seeks the truth is on the path to peace. That was his deepest conviction. ... He saw flames shooting out from the mouths of his colleagues. He saw the falsehood in their open throats and could not condone it," he said, describing St. Nicholas' experiences as a judge. Woelki's sermon also criticized the effects of self-centeredness. "Self-interest becomes a destructive disease to a human being, weakening him until he is unable to look truth in the face."

The following day, Archbishop Stefan Hesse of Hamburg gave a sermon that appeared to draw parallels between the synodal way and Jesus' Gospel journeys, while comparing reluctant travelers to Herod Antipas.

"Jesus is traveling along a way, and others join him on this way and therefore recognize him," said Hesse in his published homily. "Herod seems to me like a man who is about to start this way but never begins it. Like someone who holds back at the starting line and never breaks through it."

Hesse concluded by saying his hope was "that we can perceive one another in Christ, and allow him to be more visible in this world for Herod-types of our day."

In statements released at the conclusion of the assembly, Cardinal Reinhard Marx acknowledged disagreements between the bishops.

"All bishops have agreed to proceed with the [synodal] way — despite many differences, which have become very apparent over the past months," Marx wrote.

Addressing members of the media at a press conference after the assembly, Marx said the synodal way does not constitute a departure from church teachings. He also stressed the important of unity with Pope Francis, describing it as "absolutely substantial for the Catholic faith, for the Catholic way, which must always be interconnected with one another."

"That is the mission of the Holy Father, and therefore unity with him — particularly with him in his role as the successor of the Apostle Peter — has great importance. For us, that is totally indisputable," Marx told the press.

However, Marx also underscored the synodal way's goal of reform in his published statement. "We are aware that the synodal way will alter the church. A synodal process without reform is unthinkable," according to the cardinal's statement.

In a poignant address delivered at the assembly's final Mass, Bishop Stefan Oster of Passau discussed the current dilemma of Catholics in Germany and worldwide.

"How does a person regard their faith today in this church and this society?" questioned Oster. He said a critical-minded youth would likely perceive the church "as rife with scandal, or as archaic, or as a crooked organization with forbidding morals and incomprehensible regulations of belief."

Oster said the church overall does a poor job of demonstrating joyful faith to young people despite trials, a task made more difficult by the church's "external façade" of "the scandals and the scandalizing, the crimes, the complacency, the absence of responsibility and holy experiences."

"All of this is today causing many to turn away from the church, while many who still remain have arrived at a type of ashamed 'Catholicism of resignation' — along the line of, 'I still belong to the church despite everything, anyway the church still does a lot in terms of social work.' "

Oster urged believers to overcome disillusionment and be witnesses of faith through example. "Our time demands witnesses of holiness, especially also of simple holiness in everyday life, of which Pope Francis speaks," said Oster.

He expressed his hope that the synodal way "goes well" and invited others to accompany the bishops' undertaking in whatever way possible.

"Above all, pray for all of us who are embarking on this shared path for the Church in Germany," he said.

The synodal way will begin on the first day of Advent, with its first plenary scheduled for the end of January 2020 at the Cathedral of St. Bartholomew in Frankfurt am Main.

A version of this story appeared in the Oct 18-31, 2019 print issue under the headline: Despite disagreements, German bishops commit to 'synodal way'.