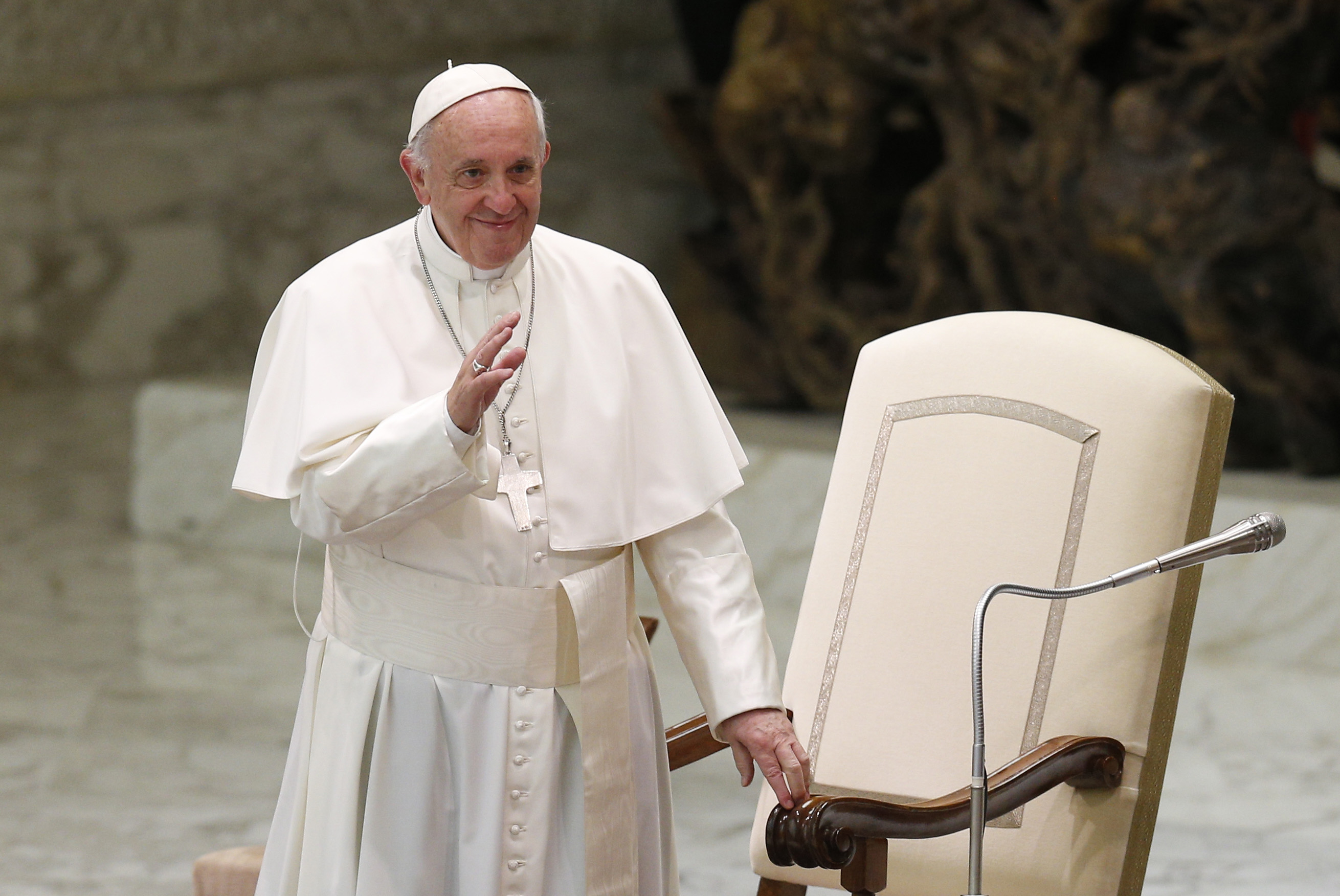 Pope Francis greets the crowd as he begins his general audience in Paul VI hall at the Vatican Feb. 7. (CNS/Paul Haring)

Pope Francis urged a global coalition fighting human trafficking Feb. 9 to examine how society has tolerated or even turned a blind eye to the exploitation of vulnerable people.

In an address to the Santa Marta Group, an alliance of police chiefs and bishops working to fight trafficking, the pontiff said modern slavery is "far more widespread than previously imagined, even – to our scandal and shame –within the most prosperous of our societies."

The pope cited God's question to Cain -- "Where is your brother?" -- and said it "challenges us to examine seriously the various forms of complicity by which society tolerates, and encourages, particularly with regard to the sex trade, the exploitation of vulnerable men, women and children."

Francis was speaking at the end of the anti-trafficking alliance's fifth global conference, which was held at the Vatican Feb. 8-9 and attracted a number of bishops and representatives of at least a dozen separate national police forces.

British Cardinal Vincent Nichols, the president of the group, told Francis Feb. 9 that they were taking "a hard look at the darkest face of globalization" during their meetings.

In a brief address to the pope explaining the alliance's work, the cardinal highlighted what he called the "growing cooperation" between law enforcement agencies and the Catholic Church on trafficking issues. He also gave credit to the efforts of Catholic women religious, who he said "are so often on the front line of this work."

"We thank God for their courage," Nichols said to Francis about women religious.

In a separate press briefing later Feb. 9, the British cardinal cited figures that some 42 million people around the world are victims of human trafficking, saying: "The drama of human trafficking has never been greater, ever, than it is at this moment."

Nichols said he had also learned during the alliance's meeting that there are some 4.4 million fishing vessels globally, and that "on many of those, there will be people in enslaved labor."

The Santa Marta Group scheduled its February meeting to begin Feb. 8 in order to coincide with the feast day of St. Josephine Bakhita, a 19th century Sudanese woman who had been held as a slave before becoming a Catholic sister.

The alliance's meeting, which was closed to the press, included reports on the group's activities on five continents and on the work of international agencies such as Europol and the International Organization for Migration.

Among the speakers at the event were new U.S. Ambassador to the Holy See Callista Gingrich and Austin, Tex. Bishop Joe Vásquez, who is chairman of the U.S. bishops' migration committee.

The Santa Marta Group began its work in April 2014 with a conference at the Vatican attended by Francis. Attendees of the original event signed a commitment pledge to fight against trafficking in order to "eradicate the scourge of this serious criminal activity, which abuses vulnerable people."

The group advertises that it now has members in over 30 countries. They are pledged to raise awareness about trafficking and to help development relationships between the church, law enforcement agencies, and civil institutions.

A note from the editors of Global Sisters Report: Feb. 8 is the International Day of Prayer and Awareness Against Human Trafficking and the feast day of St. Josephine Bakhita, a Canossian nun and former slave. The date was chosen at the request of women religious to highlight her life. In honor of the day and St. Josephine Bakhita, Global Sisters Report is running series of stories about sisters' anti-trafficking work around the world. Find all of our coverage here.