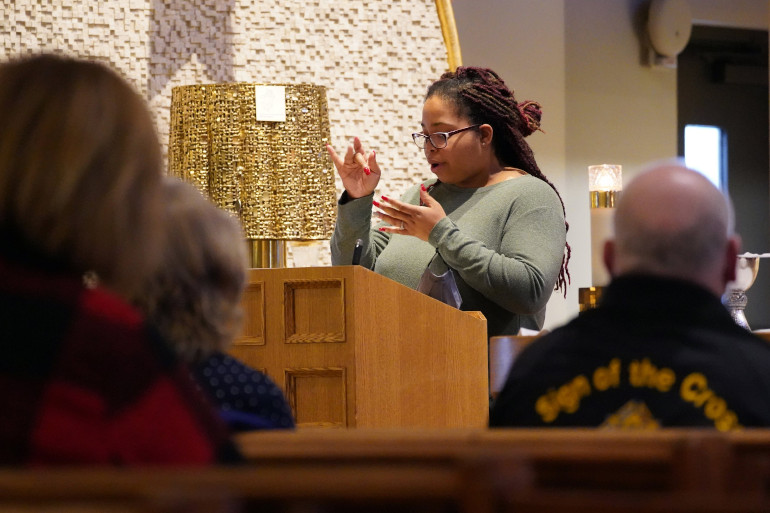 Corinne Griske uses American Sign Language while serving as a lector during a Mass for members of the Catholic Deaf Community of Long Island, N.Y., at St. Frances de Chantal Church in Wantagh, N.Y., Dec. 20, 2020. (CNS photo/Gregory A. Shemitz)

Pope Francis has changed Catholic Church law to make explicit that laywomen can act as readers and altar servers in liturgical celebrations, effectively removing a previous option for individual bishops to restrict those ministries only to men.

In an unexpected apostolic letter published Jan. 11, the pontiff says he is making the change to recognize a "doctrinal development" that has occurred in recent years. 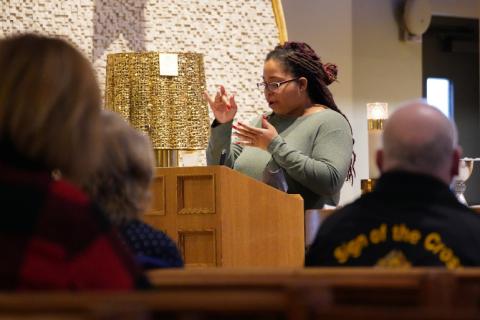 Corinne Griske uses American Sign Language while serving as a lector during a Mass for members of the Catholic Deaf Community of Long Island, N.Y., at St. Frances de Chantal Church in Wantagh, N.Y., Dec. 20, 2020. (CNS photo/Gregory A. Shemitz)

That change, the pope says, "shines a light on how some ministries instituted by the church have as their foundation that common condition of baptism and the royal priesthood received in the Sacrament of Baptism."

Francis' new letter, titled Spiritus Domini and issued motu proprio (on his own initiative), changes the Code of Canon Law to explicitly allow women to be installed in the Catholic Church as lectors and acolytes.

Laypeople who serve in those ministries are not ordained but can be formally instituted into the roles during a church ceremony.

Although women in many U.S. Catholic dioceses already serve as readers and altar servers, the church's canon law had technically only allowed for their service on a temporary basis and according to the whim of the local bishop.

The pope's change, which replaces "lay men" as the category of those who can formally serve in the ministries with "lay persons," would appear to require all global Catholic bishops to accept women into those roles.

Francis has struggled throughout his nearly eight-year papacy to better include women in the Catholic Church's leadership structure and ministries, and has repeatedly reaffirmed Pope John Paul II's ban on women's ordination to the priesthood.

Last year, the pope disappointed those campaigning for the church to return to the practice in early centuries of the faith of ordaining women as deacons, declining to answer a request from the Synod of Bishops for the Pan-Amazon region on the issue.

The pope has however created two commissions to study women deacons, with the latest being announced in April 2020.

Phyllis Zagano, a recognized expert on women deacons and a member of the pope's first commission, told NCR that Francis' change to canon law represented "the first official recognition" that women could serve in a role near the altar during liturgical celebrations.

"Here we have the Holy Father putting into law that women can be inside the sanctuary, women can be near the sacred," said Zagano, who is senior research associate-in-residence at Hofstra University and also an NCR columnist. "That women are equally human."

The Jan. 11 letter making the canon law change was published alongside a letter from the pope to Cardinal Luis Ladaria, the prefect of the Vatican's Congregation for the Doctrine of the Faith.

In that letter, Francis again mentions John Paul II's ban against ordaining women to the priesthood but adds that "for non-ordained ministries it is possible, and today appears opportune, to go beyond that reservation."

Francis tells Ladaria that offering both men and women the opportunity to serve as lectors and acolytes "will increase the recognition … of the precious contribution that many lay people, including women, offer to the life and mission of the church."

"The choice to confer these offices to women … will make more real in the church everyone's participation in the work of evangelization," the pope continues.

Francis tells Ladaria that it will be the role of national bishops' conferences to consider possible criteria for who in their communities could serve as lectors and acolytes, and says he is also directing the Vatican's worship congregation to update its norms about the two ministries to reflect the change to canon law.

This breaking story is being updated.

A version of this story appeared in the Jan 22-Feb 4, 2021 print issue under the headline: Francis changes Catholic Church law: Laywomen can act as lectors, altar servers.