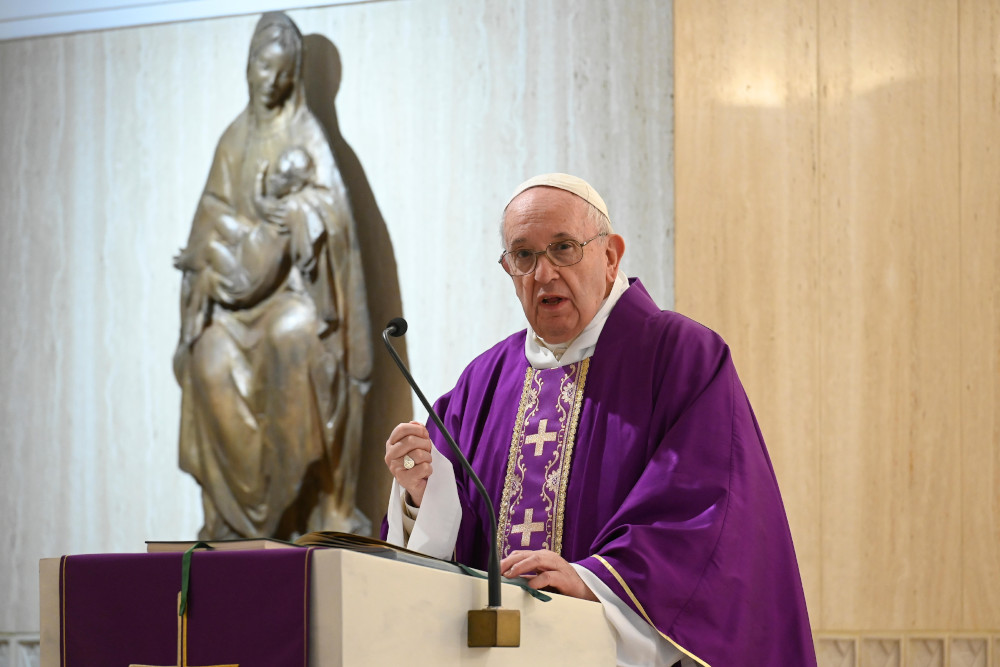 Pope Francis gives his homily during his livestreamed Mass March 24, 2020, from the chapel of his Vatican residence, the Domus Sanctae Marthae. (CNS/Vatican Media)

Many Christians are caught in a trap of complaining about everything and doing nothing about it, Pope Francis said in his morning Mass.

The sin of sloth, marked by careless indifference, apathy and self-pity, is a "poison, a fog that envelops the soul and doesn't let it live," he said in his homily at Mass that was livestreamed March 24.

The pope began the Mass by praying for deceased health care workers and priests who were infected with the coronavirus after caring for patients ill with COVID-19.

He thanked God for their "heroic example" of caring for the sick.

In his homily, the pope reflected on the day's Gospel reading from St. John in which Jesus goes to the healing waters of the pool of Bethesda in Jerusalem and sees an ill man sitting helplessly by the pool.

It was apparent to Jesus that this man had been ill for decades, and he asked him if he wanted to be healed.

The man's response "is interesting," the pope said, because he doesn't enthusiastically or decisively answer, "Yes," he just complains.

And he doesn't complain about his affliction, but rather laments how there is no one around to help him and all these other people get in the pool before him, the pope said.

Jesus simply tells him to "Rise, take up your mat and walk," which he does. Not only does he not express his gratitude, he also later identifies Jesus to religious leaders who will persecute Jesus for healing someone on the Sabbath.

Francis said that despite what physical ailment the man may have had, what was really wrong with him was the sickness "in his heart, he was sick in his soul, he was ill with pessimism, sick with sadness, he was sick with sloth," blaming others and doing nothing himself to promote his healing.

"The sin of sadness is the seed of the devil, that inability to make a decision about one's own life, but OK with looking at other people's lives in order to complain about that, not to criticize them but to lament about oneself," he said.

"It makes me think about so many of us, so many Christians who live in this state of sloth, unable to do anything but complain about everything," the pope said.

He asked that God help people realize how ugly and evil this sin is and be aware of the dangers of falling into this trap.