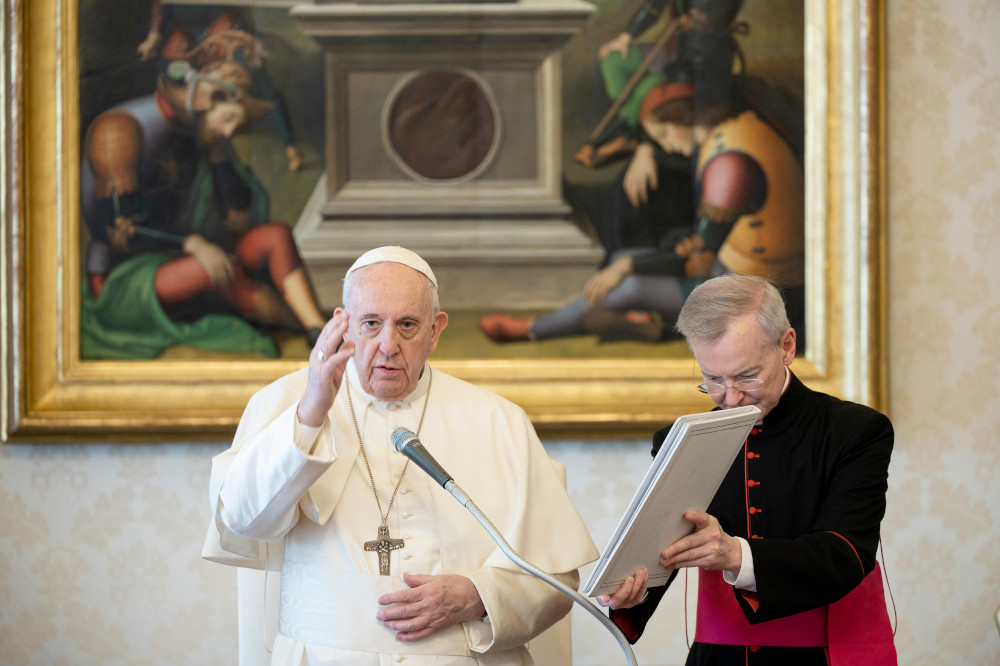 Pope Francis gives a blessing during his weekly general audience April 29, 2020, in the papal library in the Apostolic Palace. Concluding his series of audience talks about the Eight Beatitudes, the pope focused on the final one, "Blessed are they who are persecuted for the sake of righteousness, for theirs is the kingdom of heaven." (CNS/Vatican Media)

Pope Francis asked Christians to join their love for the church with a caring concern for civil society, particularly at this time of the coronavirus pandemic.

Marking the feast day of St. Catherine of Siena, Francis prayed that people would be inspired by her example and asked for her intercession "to protect Italy during this pandemic" and that, as the patron saint of Europe, she would help the continent stay united.

The pope offered his prayers April 29 at the end of his weekly general audience, which was livestreamed from the papal library in the Apostolic Palace.

In his greetings to the faithful in Italian, he said St. Catherine's communion with Christ gave her the courage and the "boundless hope that sustained her" during the darkest hours.

"Even when all seemed lost, it allowed her to influence others, even those at the highest levels in society and the church, with the power of her faith," he said.

"May her example help each one of us know how to unite, with Christian consistency, an intense love for the church with an effective care for civil society, especially during this time of trial," the pope said.

In his main audience talk, the pope concluded his series of talks about the Eight Beatitudes from Matthew 5:3-12, by focusing on the final beatitude: "Blessed are they who are persecuted for the sake of righteousness, for theirs is the kingdom of heaven."

Living according to the beatitudes — exalting the poor in spirit, those who mourn, the meek, those who thirst for righteousness, the merciful, the clean of heart, the peacemakers — can lead to persecution, the pope said.

"But, in the end, this persecution brings joy and great reward in heaven," he said.

A world faithful to its own idols, trade-offs and priorities, absolutely refutes the beatitudes and it will never be able to "approve" this kind of life, he said. Instead it will deem it a "mistake and a problem, therefore, something to marginalize."

In fact, people who live out the Gospel truly irritate those who live with a "worldly mentality," he said, because they see this Christian witness as a form of reprimand.

Whenever the holiness and beauty of life as a child of God appear, something "uncomfortable" happens because one must choose: either start questioning oneself or "reject this light and harden the heart, even to the point of opposition and rage," he said.

But the tragedy of persecution is also "the place of liberation from subjection to success, vainglory and the world's compromises," he said.

It is dangerous to compromise with the world and the devil, he said, adding that Christians will always be tempted to compromise.

Those who are rejected by the world because of Christ discover the joy of finding something worth more than the whole world, he said. "Let us not be discouraged when a life consistent with the Gospel attracts the persecution of people. The Spirit sustains us on this journey."

At the same time, the pope remembered the many Christians suffering persecution in various parts of the world.

"We must hope and pray that their tribulation may be stopped as soon as possible," he said. "We are one body, and these Christians are the bleeding members of the body of Christ, which is the church."