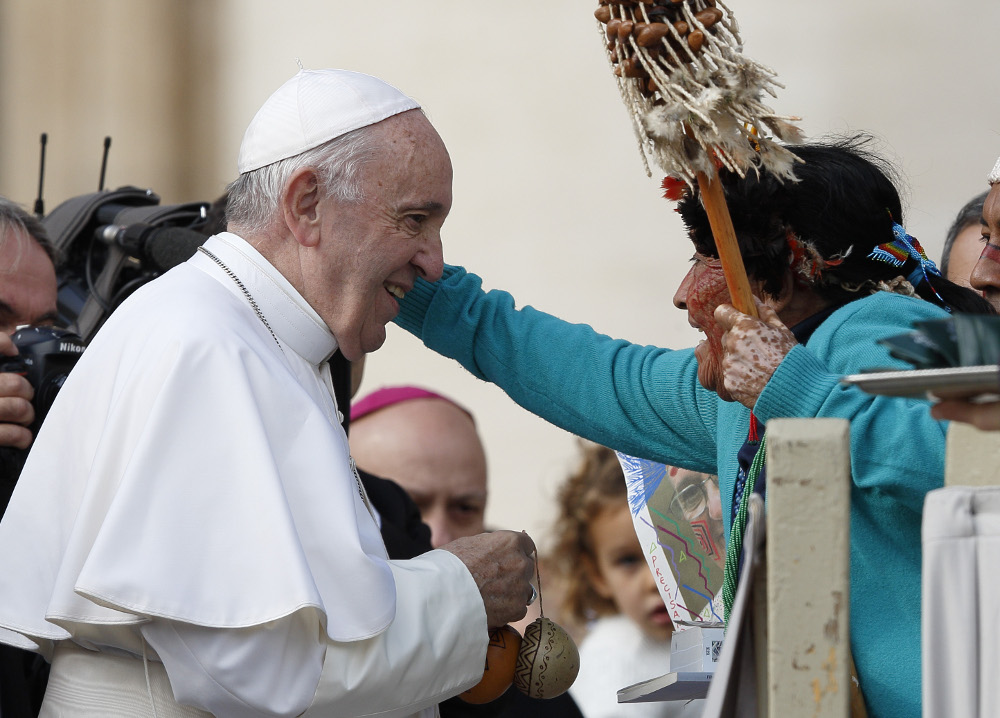 Pope Francis meets Merina from the Macuxi tribe in Brazil during his general audience in St. Peter's Square at the Vatican Nov. 7. (CNS/Paul Haring)

Life is for loving, not amassing possessions, Pope Francis said.

In fact, the true meaning and purpose of wealth is to use it to lovingly serve others and promote human dignity, he said Nov. 7 during his weekly general audience.

The world is rich enough in resources to provide for the basic needs of everybody, the pope said. "And yet, many people live in scandalous poverty and resources — used without discernment — keep deteriorating. But there is just one world! There is one humanity."

"The riches of the world today are in the hands of a minority, of the few, and poverty — indeed, extreme poverty, and suffering — are for the many," he told those gathered in St. Peter's Square.

The pope continued his series of talks on the Ten Commandments, focusing on the command, "You shall not steal," which reflects respect for other people's property.

However, he said, Christians should also read the commandment in the light of faith and the church's social doctrine, which emphasizes the understanding that the goods of creation are destined for the whole human race.

The Catechism of the Catholic Church teaches that the "primordial" universal destination of goods does not detract from people's right to private property, he said. However, the need to promote the common good also requires understanding and properly using private property.

"No one is the absolute master over resources," he said, which reflects the "positive and wider meaning of the commandment, 'Do not steal.' "

Owners are really administrators or stewards of goods, which are not to be regarded "as exclusive to himself but common to others also, in the sense that they can benefit others as well as himself," the pope said, citing the catechism.

Being in possession of material goods brings with it much responsibility, the pope said.

If hunger exists in the world, the pope said, it is because the needs of the economic market come first, for instance, when keeping prices up means demanding that food be destroyed or thrown away.

What is lacking, he said, is "a free and farsighted business sense that assures adequate production and fair planning, which ensures fair distribution."

The pope underlined the importance of viewing possessions and wealth from the Christian perspective of gift and generosity, saying "what I truly possess is what I know how to give."

"If I know how to give, I am open, I am rich," not only in possessions but in generosity, knowing it is a duty to give so everyone can have a share, he said. "In fact, if I am unable to give something it is because that thing owns me, I am a slave, the thing has power over me."

The devil always enters people's lives "through the pockets" with money, the pope added. "First comes the love for money, the scramble to own, then comes vanity" and bragging about one's wealth, he said, "ending with pride, arrogance. This is how the devil operates in us."

Instead, ownership must be an opportunity to multiply those goods "with creativity and use them with generosity and that way grow in charity and freedom," he said.

While the world breathlessly seeks to have more and more, God — rich in mercy — redeemed the world by making himself poor, paying a priceless ransom on the cross, he said.

"What makes us rich are not goods, but is love," the pope said. "Life is not a time for owning things but for loving."

For Christians, the full sense of "Do not steal" means loving with what one owns, taking advantage of one's means as a way to love others as best one can, the pope said. "This way your life becomes good and ownership truly becomes a gift."