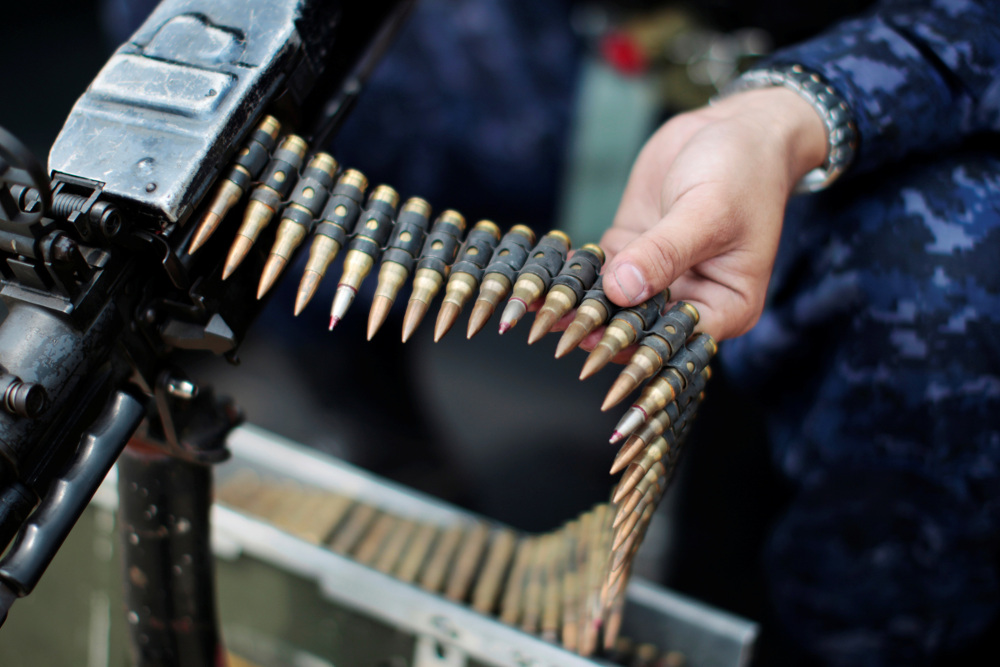 An army special forces soldier checks a machine gun before an infiltration exercise in Ilopango, El Salvador, May 4, 2016. In a recent interview, Pope Francis said countries that sell arms have no right to talk about peace. (CNS/Jose Cabezas, Reuters)

Nations that actively engage in arms dealing and help foment war in other countries should not expect to find peace in their own lands, Pope Francis said.

During a wide-ranging interview with the Spanish news program, "Salvados," which aired March 31, the pope was asked his opinion by journalist Jordi Evole regarding the Spanish government's sale of weapons to Saudi Arabia, which is currently engaged in a conflict with Yemen.

The pope said that while he was saddened by the country's action, Spain "isn't the only country" involved in arms dealing.

Countries that sell arms, he said, "have no right to talk about peace. They are fomenting war in another country, and then they want peace in their own land."

He said it has a "boomerang" effect in which there's always a price to pay when taking a life. "If you start war over there, you're going to have it at home whether you want it or not."

Asked about migration in Europe, the pope cited the book of Deuteronomy, saying the act of welcoming migrants is "a Christian attitude."

While countries like Turkey, Lebanon and Jordan have received millions of migrants from Syria, the pope said he was "saddened" and did "not understand the insensitivity" toward migrants facing injustice of war, hunger and exploitation.

"For me," he said, "Europe's biggest problem is that they have forgotten. They forgot that after the war, their children went knocking on the doors of America, North and South America; they forgot. And along with that, (Europe) doesn't grow. We are living in a demographic winter."

Although birthrates in Europe continue to decline, some countries continue to reject migrants, thus running the risk not having a future, he said.

Evole also asked the pope what he thought about U.S. President Donald Trump's proposal for a wall along the Mexican border.

"Those who build walls end up becoming prisoners of the walls they built," he replied.

"And that is universal law, not only within the social order but also in one's personal life. If you build a wall within yourself, you end up becoming a prisoner of the wall you built. 'I'm defending my autonomy.' Yes, but you'll be as lonely as a cloud," he said.

When asked what he would say to Catholics in Spain who are against immigration, the pope replied, "That they read the Gospel, they are Catholics; that they read it and be consistent."

The pope also addressed the process of reform within Vatican City and praised his predecessors in their work to "clean up" the institution.

"The popes that were here before did so much good, like St. Paul VI who was a revolutionary, St. John Paul II, who also did many things," he said. "And Benedict, who although many said he was too much of an academic, grabbed the reins at certain moments and went in to clean."

"There are ('merchants'), as there are in every place. Vatican City State is not exempt from the limitations, sin and shame of other societies. We are human beings and we have the same limitations and we fall, at times, into the same things," he said.

The church, the pope added, "must continue to be cleansed."

He was also asked for his thoughts on abortion, particularly women who seek to terminate their pregnancies after rape.

Pope Francis said that while he understood the "desperation" that women face in difficult circumstances, taking a human life was not the answer.

Single women who are pregnant, he said, "cannot be thrown to the streets. And thank God that, in recent years, there is a greater awareness about these cases, of women who are alone and are going to be mothers."

When asked further about countries that penalize unwed mothers, the pope replied, "I am not going to dispute the individual laws of a country. My question is, before civil law, before religious law, regarding the human (aspect): Is it right to eliminate a human life to resolve a problem? Is it right to hire a hitman to resolve a problem? After that, the other answers will follow. But that is the basic question."