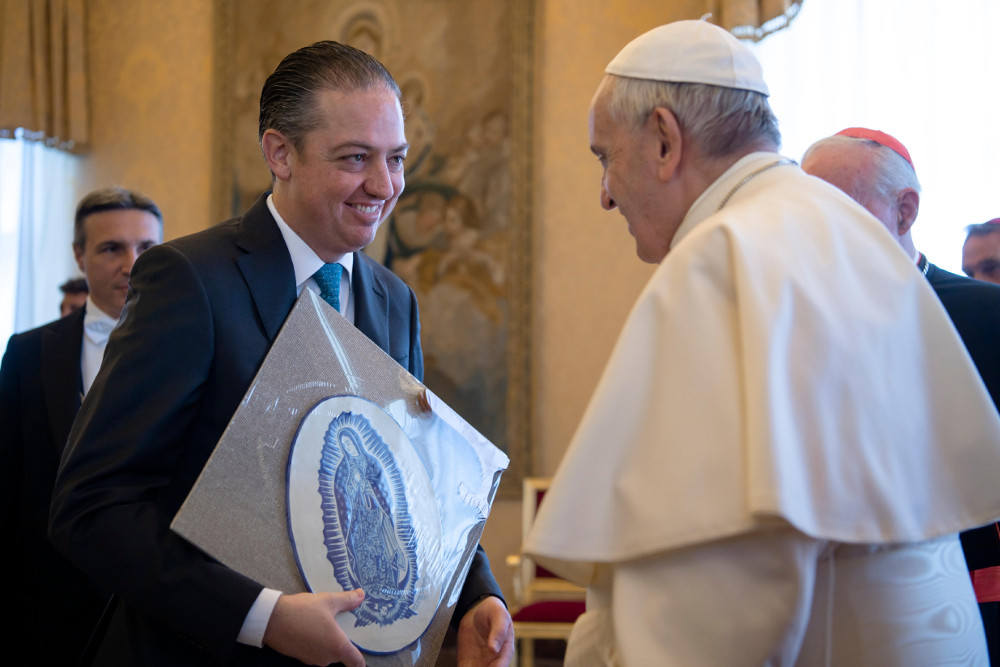 Pope Francis accepts a gift bearing an image of Our Lady of Guadalupe during a meeting with young Catholic leaders from Latin American at the Vatican March 4, 2019. (CNS/Vatican Media)

What makes a politician "Catholic" is not party affiliation, but dedication to promoting the common good, particularly through listening to and empowering people who often are overlooked, Pope Francis said.

"I invite you to live your faith with great freedom, never believing that there exists only one form of political commitment for Catholics, a Catholic party," the pope said March 4 during a meeting with 26 young Latin America leaders attending a course on politics and the social teaching of the church. The course was supported by the Pontifical Commission for Latin America.

Pope Francis told the young adults that politics in Latin America needs "a new presence of Catholics," meaning not just "new faces in the electoral campaigns, but mainly new methods that are simultaneously critical and constructive."

A Catholic politician, he said, always looks for "the possible good, even if it is modest."

Quoting St. Paul VI, Pope Francis told the young leaders, "In concrete situations, and taking account of solidarity in each person's life, one must recognize a legitimate variety of possible options. The same Christian faith can lead to different commitments."

For that reason, he said, Catholic politicians will join different parties and will work with people of other faiths in pursuing the common good.

"Being a Catholic in politics does not mean being a recruit from a group, an organization or a party," but striving to serve others based on one's baptismal calling and strengthened by regular participation in a faith community.

Without that support, he said, one risks facing "the challenges of power, of strategies, of action" alone.

True democracy can never mean "for the people, but not with the people," the pope said. To be Catholic is to recognize that one belongs to a community, to listen to the community and to respond to the real needs of people in the community.

In Latin America today, the pope said, there are three groups that need particular attention, and listening to them offers real hope for finding concrete solutions to the region's problems: women, the young and the poor.

Women, he said, are "a pillar in the building of the church and society," young people have "the dissatisfaction and rebelliousness that are necessary to promote true changes and not merely cosmetic ones" and, through service to and with the poor, he said, "the church shows her fidelity" to Christ.

"Their presence, their joys and, especially, their suffering are a strong wake-up call for those who are responsible for public life," the pope said, and in responding to their needs, a government goes a long way in truly working for the common good in ways that are concrete and not simply slogans.

"If we do not want to get lost in a sea of empty words, let us always look at the faces of women, young people and the poor," he said. "Let's look at them as subjects of change and not as mere objects of assistance."

Pope Francis also quoted at length from a homily delivered by St. Oscar Romero in 1978: "To be a good political activist one need not be a Christian, but Christians involved in political activity have an obligation to profess their faith in Christ and to use methods that are congruent with their faith. If a conflict arises in this area between loyalty to the faith and loyalty to the organization, genuine Christians must choose faith and demonstrate that their struggle for justice is for the justice of God's kingdom and no other."