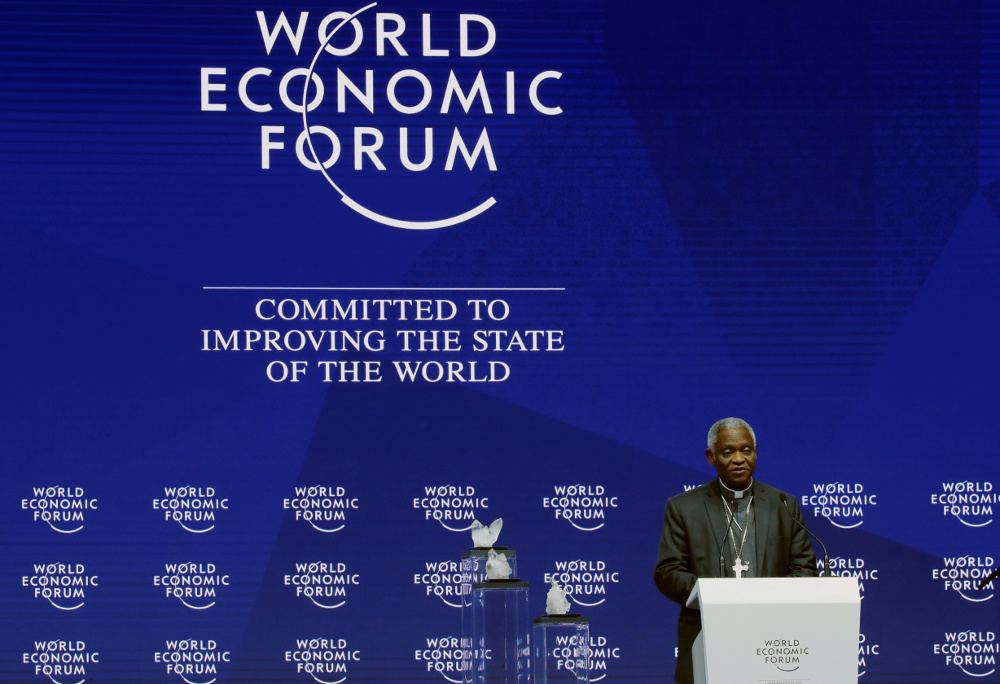 Global leaders must implement policies that support the family and offer real opportunities for the growth and development of all people, Pope Francis told people attending the World Economic Forum in Davos, Switzerland.

"If we want a more secure future, one that encourages the prosperity of all, then it is necessary to keep the compass continually oriented toward 'true North,' represented by authentic values," he wrote.

"Now is the time to take courageous and bold steps for our beloved planet. This is the right moment to put into action our responsibility to contribute to the development of humanity," he told corporate and political leaders.

The pope's message was read at the meeting Jan. 22 by Cardinal Peter Turkson, prefect of the Dicastery for Promoting Integral Human Development.

The annual meeting in Davos brought together people representing business, government, academia and media to discuss the theme, "Creating a Shared Future in a Fractured World." They were to address topics such as sustainable development and inclusive economies as well as challenges posed by cyberattacks and divisive "narratives."

In his written message, the pope said, "we are increasingly aware that there is a growing fragmentation between states and institutions."

The pope told world leaders and global executives that they must confront both new and lingering problems and challenges, such as unemployment, poverty, economic and social inequality, and new forms of slavery.

"It is vital to safeguard the dignity of the human person, in particular by offering to all people real opportunities for integral human development and by implementing economic policies that favor the family," he said.

"We cannot remain silent in the face of the suffering of millions of people whose dignity is wounded," he said, adding that it is a moral imperative for everyone "to create the right conditions to allow each person to live in a dignified manner."

"By rejecting a 'throwaway' culture and a mentality of indifference, the entrepreneurial world has enormous potential to effect substantial change by increasing the quality of productivity, creating new jobs, respecting labor laws, fighting against public and private corruption and promoting social justice, together with the fair and equitable sharing of profits," the pope said.

"There is a grave responsibility to exercise wise discernment, for the decisions made will be decisive for shaping the world of tomorrow and that of future generations," he added.