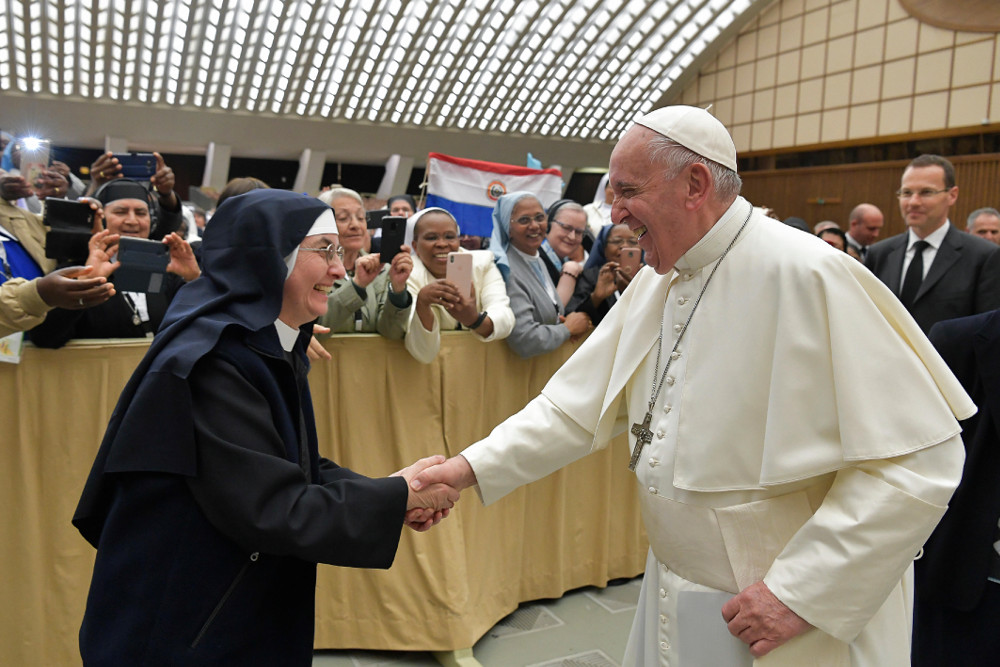 Pope Francis greets a nun during a meeting with 850 superiors general May 10, at the Vatican, who were in Rome for the plenary assembly of the International Union of Superiors General. (CNS/Vatican Media via Reuters)

Editor's Note: This story was updated at 7:45 a.m. Central time.

Pope Francis announced May 10 that he has given the report of the Vatican commission studying the history of women deacons in the Catholic Church to the global umbrella organization of women religious that requested the group's creation three years ago.

In a nearly hour-long audience at the Vatican with members of the International Union of Superiors General (UISG), the pontiff repeated his earlier remarks that the 12 members of the commission had been unable to come to agreement about the role of women deacons in the early centuries of Christianity.

"They came to a certain point," said the pope. "Everyone agreed. Then, each had his or her own idea."

Referring to the leader of the UISG, Maltese Sr. Carmen Sammut, Francis then added: "So I delivered to the president today, officially, the result of the little that they were all able to agree on."

Francis had first spoken about the deacons commission in response to a question from NCR during an in-flight press conference May 7. The pope had said that while the commission had stopped working as a group, they would continue their studies in the area individually.

In his May 10 audience with 850 UISG members, in Rome for the group's triennial assembly, the pontiff gave a bit more detail. Some on the commission, he said, thought the church "must go forward" and reinstitute an order of women deacons. Others, he said, "say we must stop here."

"We must study this," said Francis. "I cannot make a sacramental decree without a theological, historical foundation."

Reiterating that the commission members are now expected to continue their studies individually, the pope added: "We will go ahead. After some time, I may call the members of the commission to see what they have found."

Francis' audience with the women religious was unexpectedly engaging. He walked into Paul VI Hall accompanied by Sammut and Sr. Pat Murray, UISG's executive director and a member of the Institute of the Blessed Virgin Mary. When they reached the rostrum, the pope asked attendants to bring a chair forward so Sammut could sit next to him for the entire event.

Sammut, who also leads the Missionary Sisters of Our Lady of Africa, spoke first, introducing Francis to the group and to the theme of their assembly: "Sowers of Prophetic Hope." The pope took notes as she spoke.

Francis spoke off the cuff for a few minutes, responding to some of the points Sammut had made. The pope then unexpectedly offered the women religious 40 minutes of question-and-answer time, inviting people to come forward and ask what they wanted.

The range of topics touched was vast and included clergy sexual abuse, how doctrine develops in the church, and a possible papal visit to South Sudan.

After hearing the pope's initial remarks about the women deacons commission, one sister told Francis that women like her were seeking to serve the church on an equal setting with men. She asked why the question of whether women could serve as deacons rested on historical practice.

"We are Catholics. If someone wants to make another church, they are free to do so."

The pontiff responded that the church develops its teachings "in fidelity with revelation." He said the nature of revelation is "continual movement to clarify itself."

The awareness of faith, the pope said, "grows with the years."

"It is in continual growth," he said. "Not change. It grows. It gets wider with time. It is understood better."

"If I see that this, what we think now, is in connection with revelation, good," said Francis. "But if it is a strange thing that is not according to revelation … it doesn't work."

"In the case of the diaconate, we have to see what was there at the beginning of revelation," said the pope. "If there was something, let it grow, let it live. If there was not something … it doesn't work."

"We cannot go beyond revelation and dogmatic expressions," he said. "We are Catholics. If someone wants to make another church, they are free to do so." 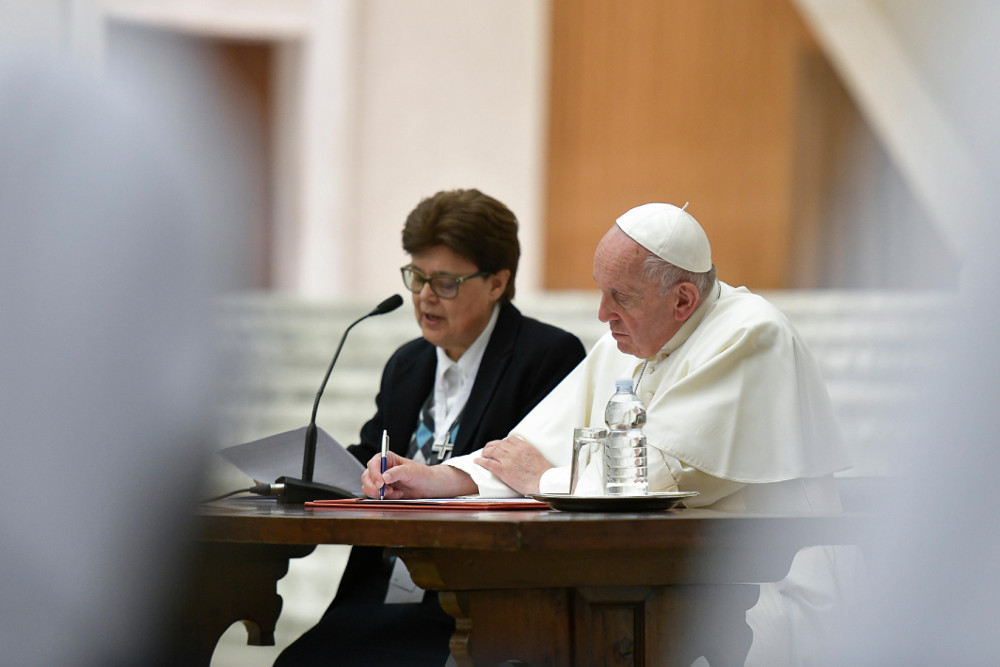 Sr. Carmen Sammut, superior general of the Missionary Sisters of Our Lady of Africa and the outgoing president of the International Union of Superiors General, gives her address alongside Pope Francis during a meeting of the organization at the Vatican May 10, at the Vatican. (CNS/Vatican Media via Reuters)

Francis spoke about sexual abuse of both minors and of women religious.

On abuse of minors, the pope said the church has "started a process" to address the issue systemically.

"Slowly, we are creating processes," he said, mentioning his recent signing of new laws mandating that all priests and religious order members report abuse or its cover-up. The church, he added, has taken awareness of the issue "with much shame."

"But blessed shame," he said. "Shame is a gift from God. It is a process. And we must go ahead with the process — step by step by step — to solve this problem."

On the abuse of women religious, Francis said it was a "serious" and "grave" problem.

"Even here in Rome, I am aware of the problems, of the information that is coming in," said the pope. "Not only of sexual abuse, but abuses of power, abuses of conscience. We must fight against these."

He told the women their lives should be ones of service, not servitude. "You did not become a religious to do the domestic work of a priest," he said.

Francis spoke about South Sudan in response to a question from a sister from the country. She told the pope that people there were grateful for the retreat he recently hosted at the Vatican for their leaders, but said they are still hoping he might be able to visit the world's youngest nation.

He mentioned that he planned to go the country last year, but was unable due to security concerns. Noting his scheduled September trip to the African nations of Mozambique, Madagascar and Mauritius, Francis said he "might" be able to go this year. But the pope stressed the word "might."

"It's not a promise!" he exclaimed.

Francis did make one promise, however. He told the sisters that he would be attending their next plenary assembly, to be held in 2022.

"If I am alive, I will go," said the pope. "On the contrary, remind my successor, so he may do the same!"

A version of this story appeared in the May 31-June 13, 2019 print issue under the headline: Francis puts off decision on women deacons, cites lack of consensus.